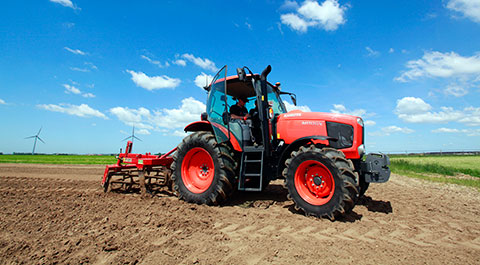 Plenty of potential but not the finished article – its weak engine was a disappointment and the cab finish needs some work. But there’s plenty to build on – the cab frame, engine functions and abundance of powershift steps are all plus points. Base price: £49,900.

Kubota’s cab frame is the jewel in the Japanese firm’s crown. It offers acres of glass and slim pillars to provide arguably the best views of any small-to-medium sized tractor in production.

Unfortunately the interior finish can’t keep pace with the top-notch cab design, boasting more plastics than Toys R Us and leaving the Kubota feeling like a machine at the budget end of the market.

That said, the Kubota is the only tractor in its price bracket to provide armrest-mounted controls. It’s good in theory – key switches for linkage, powershifting and engine speeds are close to hand – but the armrest is too short and the seat doesn’t move far enough back to be comfortable.

Information is shared between the dashboard display and a small screen on the side console. The latter can show four figures at one time but are grouped awkwardly – we found it was not possible to show pto speed and travel speed on the same screen, for instance.

Elsewhere in the cab there’s a pretty limited selection of storage space. The other disappointment is the lack of illumination, which means if you’re working in the dark and unfamiliar with the controls it can be hard to find what you’re looking for.

But the tractor does gain from Kubota’s bi-speed steering system, which works under 8kph and is ideal for mucking out and other tight-turning duties. On the road it can be bouncy as it nears its 39kph top speed.

Kubota uses its own four-pot, which was a big disappointment in the tests. Max power was recorded at just 89hp and comes with the engine puffing and wheezing at 2,470rpm.

Torque wasn’t much better with the engine mustering 317Nm to put it a distant last. As for consumption – the Kubota delivered a mixed bag with 294g/kWh making it the least efficient at max power but its 200g/kWh made it the best at its rated power.

That’s not to say it’s short of functions, either. There’s a rev limiter, an engine boost function and two rpm memories, albeit programmed by a slightly complicated press-and-hold process.

Kubota’s powershift-biased transmission offers eight steps in each of the three ranges. Shifts can be controlled either by buttons on the gearstick, which are a long reach away, or by thumbing armrest buttons and each change is confirmed by an irritating high-pitched bleep.

The jolty powershift steps can be automated, but it’s only possible to flick up and down a maximum of four speeds. Sensitivity of the shifts can be tweaked but any adjustments are only noticeable in the min and max positions.

For fieldwork there are nine speeds in the 4-14kph working range and on the road top speed will tickle 39kph.

Kubota’s Cat II hardware has basic hole-and-pin stabilisers and one adjustable arm. Measuring just 4.28m head to tail it was the shortest and at 4,050kg it was also the lightest of the test tractors. Add that to the below average 5,700kg lift capacity and the Kubota might be better suited to yard work.

Max hydraulic flow was 75-litres/min and our test tractor came kitted with four colour-coded spools, although only two are standard. They’re controlled through well-positioned levers and all have a float position.

Activation of the power take-off is through a nice pull-and-twist knob in the cab. Only two speeds can be specified and they run at surprisingly high revs – 540 coming at 2,500rpm and 1,000 at a roaring 2,600rpm.

In the diff-lock department there’s separate controls for front and rear – the front section is locked by a small button on the dash and the rear is engaged by a pedal – but there are no auto functions for either four-wheel drive or to lock the diffs.

The Kubota’s hunchback hood is heavy and needs some wrestling to open. The air filter is easily accessed at the front, but the radiators aren’t so easy to get at.