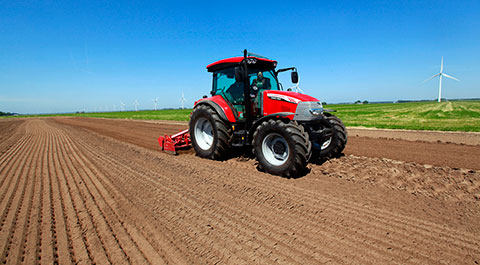 The little McCormick was the surprise package. Simple, manoeuvrable and with a library-quiet cab, it’s got to be worth a look when you come to replace your loader tractor. The only downsides were its ability to tow a load and, for taller operators, the low cab roof. Base price: £50,499.

Scaling the two steps up into McCormick’s four-poster reveals a surprisingly spacious cab. The build quality is below average, but tons of glass means it scores well for visibility and there’s a small plastic hatch in the roof for loader work.

Right-sided levers and switches are clearly displayed and well labelled. However, the hand throttle sits too near to the gearstick and pto ranges are tucked behind the seat – both of which knock down its ergonomics score. We’d also like to see a bit more storage space because tools can only be stashed on the cab floor.

Elsewhere, the ventilation system kept us cool during a couple of baking Dutch days, and the stumpy bonnet contributes to the best forward visibility, although a big roof strut might hinder views with a front loader hoisted up. Sound levels reached 69.4dBa, which made it the quietest tractor in the test, too.

Although its short wheelbase makes it ultra-manoeuvrable in the yard, on the road it didn’t quite match the Deere or Valtra. The easy-turning wheel took four-and-a-quarter turns from lock-to-lock and the McCormick can practically spin on the spot with its 10.7m turning circle.

Underneath the little Italian’s hood is a four-pot Perkins. It performed pretty well in the Maha tests – it recorded 106hp at the shaft and a solid engine score of 469Nm engine torque to put it a touch behind the Deere.

Specific fuel consumption was good, too – it was more efficient than most of the tractors tested both at maximum and rated power.

Controls-wise the handthrottle nestles to the left of the gearstick, too low to be comfortable and the tractor is short of any engine speed memories.

The low, medium and high ranges are selected by a well-positioned but hard-to-move lever. The gearstick sits in a standard H-grid and there’s a declutch button on the top to give your left leg a rest. Powershift switches are smooth, but we’d like to see an extra rocker to control it nearer to the linkage controls.

Top speed is 43kph and there is an impressive 19 gears spread across the working speed bracket of 4-14kph. The middle gear range extends from 3.8-13.8kph and makes up a bulk of those speeds, so you shouldn’t have to shunt between ranges too often.

Shuttle shifting scores highly, too, and there’s a knob on the column to adjust sensitivity. One negative is the clutch pedal – it lacks precision so we found it made coupling more difficult.

The Cat II hardware has fender-mounted controllers but only one arm is easily adjustable. Stabilisers are mechanical, with a screwing system used one side and a sliding version on the other. As you might expect from a small-framed tractor linkage lift of 5,120kg was about 1t below the test average.

In the cab the linkage raise/lower switch also has a neutral position but, like bigger McCormick tractors, the switches are back-to-front so to lift the links you must press the lowest button. The middle position stops the lifting process and a big knob deals with depth control.

Three numbered spools are on offer in the hydraulics department and the pump will push out a low-scoring 60-litres/minute. Each can be locked in any position and each also has a float position.

Three pto speeds (540, 540e, 1,000) are selected by a loose lever and a display on the dash indicates the gear selected and spinning speed. Engagement is through a push button and there are on/off controls on the fenders as well, but there’s no auto mode.

Four-wheel drive and diff-lock are managed by two yellow rocker switches and can be set off or on permanently but, again, it’s short of automatic functions.

The McCormick’s one-piece hood requires a special key for opening and general access for maintenance is OK. Hydraulic and engine oil fillers have coloured caps and the air filter is easily accessed, too.

Arrange a demo on my farm