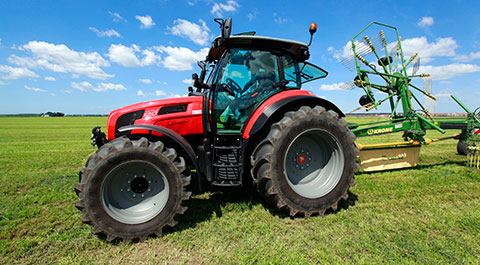 Lots of extra features should help it appeal to a wider audience, including the stop/go braking system and quick-steer wheel. But low lift capacity and limited hydraulic output won’t be so handy in the field. Base price: £65,260.

Same uses the same bubble-shaped six-poster you might find on bigger Deutz tractors. The big glass doors provide good visibility, but at just 1.37m wide it was one of the smallest cabins tested and taller members of the test team complained about headroom.

Storage space isn’t particularly abundant either, but it’s a case of quality over quantity with a closed box and cool box providing ample space to hide the cheese and pickle sandwiches.

There’s an extra switch on the dash to control Same’s funky LED running lights and the soft-buttoned work light control panel is one of a host of modern updates that will make the Same the boy racer’s pick of the test bunch. The rest of the layout is logical and the Italians go big on colour coding.

And there are several extras that set it apart from the group, including the stop/go function that means you can stamp on the brakes without declutching and is a big plus for a loader tractor.

The Maha tests revealed the Deutz motor to be a reasonable performer. It was short of torque at lower engine speeds but its maximum score of 460Nm put it in contention with the rest. That that came at a high-revving 2,100rpm, though.

Fuel consumption was high at the Same’s rated power but it was more efficient as maximum power where it tallied 248g/kWh.

Meanwhile max power totalled 108hp at just 1,750rpm, which put it second only to the pocket rocket Valtra in power terms. It also had more automatic engine functions than most of the test bunch, including two engine rev memories.

Same’s semi-powershift ‘box has three ranges (or four if you add the super creeper), five mechanical gears on an upside down grid and three powershift steps. But, despite its short travel distance, the console-mounted gearstick was pretty inaccurate.

In contrast, the standard SDF issue orange shuttle-shifter was easy-to-use and flicking a scroller on the stick tweaks its severity. There’s also quick steer, which brings turns of the wheel lock-to-lock down from four to two, and front axle suspension.

The latter helped make it one of the most comfortable tractors to drive. Cab noise could have been better, though – the constant beeping was its biggest downside and the pneumatic handbrake too often voiced its displeasure at not being applied.

Maximum road-going speed was 46kph and there’s an impressive 17 gears in the working range from 4-14kph, which pretty much guarantees good gear overlaps. However, in turtle range there’s only one speed below 4kph so you’ll need the creeper range for slow-moving jobs.

The Italian’s limited lift capacity of 4,680kg and Cat II linkage won’t be ideal for those looking to do any serious tillage work with this tractor. It uses mechanical, hole-and-pin stabilisers and the two arms are easily adjustable.

There are two external controllers for linkage and pto, while in-cab there’s a posse of buttons including console-mounted coupling controls. However, like several other test candidates the linkage raise/lower is back to front.

To add to the Same’s low lift capacity woes it also recorded the lowest max hydraulic output at 60-litres/min and the layout of outlets are split either side of the top link, which is a big negative.

But on the bright side there’s a generous four spools on offer controlled by a combination of spool arms and a cross lever.

Four pto speeds are on the table for ultimate flexibility. Unusually, engine speeds only appeared on the dash with the 1,000-speed gear selected and not for 540.

The former comes at 1,980rpm, while the eco version is achieved at 1,650rpm. There’s also an auto mode but this only serves to stop the pto.

For four-wheel drive and diff-lock the system couldn’t be simpler. There are individual on/off controls for each, but it’s much easier to thwack the ASM button, which combines the auto modes for both functions.