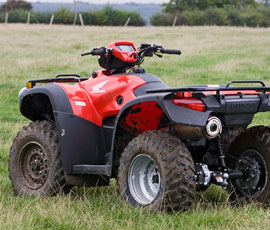 A new model from ATV market-leader Honda is always an event – and with the fifth generation of the heavy-duty Foreman, fans of the Japanese marque are unlikely to be disappointed. The Foreman TRX500 revamp is said to involve a new from-the-ground-up design with improvements in usability and rider comfort.

Available with manual or electric gear shift, the latest TRX500 sports a re-designed single-cylinder engine of 475cc capacity. A higher compression ratio is said to help generate more power at lower revs to enable the quad to pull away more easily with a heavy load, while the new fuel injection system should give “instant” throttle response and good cold-start performance.

The rear suspension has also come in for attention, with a combination of a steel swing arm and single shock absorber providing 174mm of wheel travel for added comfort and controlled power delivery. Front and rear shock absorbers are adjustable, so users can set the level of softness or hardness that suits their riding style and the terrain.

New bodywork is said to give better protection against mud and water and there’s a more comfortable riding position and smoother gear change for the five-speed transmission and easier-to-turn handlebars. The Foreman TRX500 AT will be equipped with the Hondamatic CVT drive and optional power steering.

Although power steering is a feature of Yamaha’s three most powerful ATVs, its considered unnecessary on the new Grizzly 300. This is one of a pair of new two-wheel-drive quads destined to make their debut at the LAMMA 2012 show, reflecting the attention manufacturers are currently giving to smaller machines in their ranges.

The Yamaha newcomer replaces two models – the Big Bear 250 with its 230cc engine and five-speed manual transmission, and the two-wheel drive version of the CVT-drive Grizzly 350 are both dropped from the guide listing.

The four-wheel drive Grizzly 350, incidentally, is now available with a “road legal” kit, making it eligible to be registered for extended use on the highway.

Yamaha says it aimed to combine an entertaining ride for leisure users with the practicality required for commercial use when designing the all-new Grizzly 300.

Despite having a smaller capacity (287cc versus 348cc) single-cylinder engine, the carburettor set-up and four-valve head are reckoned to give the liquid-cooled unit power characteristics similar to the 350 two-wheel drive. Plenty of low to mid-range torque suggests the engine will not have to be revved to the limit to extract decent acceleration and it is claimed to have plenty of lugging ability for pulling a trailer or sheep feeder.

Two-speed CVT for press-and-go ease of use sends drive to the back wheels through a light-weight shaft drive shaft requiring little routine maintenance.]

Kawasaki is also launching a two-wheel drive newcomer – the KVF300. It replaces the two- and four-wheel drive KLF300 ATVs, which feature five-speed and 10-speed semi-auto shift transmissions. In contrast, the KVF300 has belt and pulley CVT drive to transmit power from its 271cc engine to just the rear wheels.

“There has been growing demand for a new small capacity Kawasaki ATV and the KVF300 fits the bill,” says Simon Riches, utility product manager at Kawasaki Motors UK. “Whether used on a farm or equestrian enterprise, I’m sure the KVF300 will provide rugged reliability.”

The ATV’s single overhead camshaft engine is rated at 22hp, so should provide decent performance. Moreover the rider’s needs are catered for by installing footboards and deep-cleated foot pegs to help keep a firm footing over rough ground.

Five-step adjustable suspension shock absorbers are designed to maintain a compliant ride and 155mm of ground clearance regardless of the weight of the rider and any load carried, while also allowing regular users to set up the ride quality they like best.

While the new Kawasaki is clearly a down-to-earth work machine, Quadzilla’s newcomer is an altogether sportier machine. The RS8 comes in at the top of the range, with a 794cc engine that promises strong acceleration through the two-speed CVT drive. Alloy “A” arm adjustable suspension front and rear for tackling off-road challenges, and a stainless steel exhaust system.

Alloy wheels and oversize Maxxis Bighorn tyres for the selectable two- and four-wheel drive system add to the machine’s sporting appeal as a road-legal quad.

The “Forest” version of the Polaris Sportsman 500 has been introduced as a special with extra kit included as standard. Items include an 1,134kg winch, rear hitch, mirrors, indicators and high/low beam headlights.

Specification – other than the Sage Green colour – is otherwise the same as for the standard Sportsman 500. This includes a 498cc four-stroke engine, two-speed CVT drive and selectable on-demand four-wheel drive. Generous wheel travel and ground clearance for handling rough ground complete the package.

Farr is a new name in the Farmers Weekly listing this year; it’s the brand name adopted by the UK importer of a range of quad and utility ATVs manufactured in China.

Unlike some importers of competitively-priced ATVs from the Far East, the farming family behind Farr UK appears to have done its homework in establishing that the machines are up to the job.

“We placed the vehicles with several farmers and gamekeepers for 18 months to give them an extended trial,” says Graham Joll, sales director at the Devon-based firm. “Only when we were satisfied that they matched our expectations for a farm vehicle did we start looking to sign up dealers.”

Farr UK now has 46 dealer outlets in England and Wales supported by parts stocked at the Devon premises and in the manufacturer’s European headquarters.

“Knowing the importance of parts and service availability, we’ve put a lot of emphasis on this aspect of the business,” says Mr Joll.

Dealers are handling a three-model range of quads and three petrol-fuelled utility ATVs; a diesel-engined model is expected in 2012. A track system is available for the quads along with a selection of implements, including a snow plough, drag harrows and trailers.