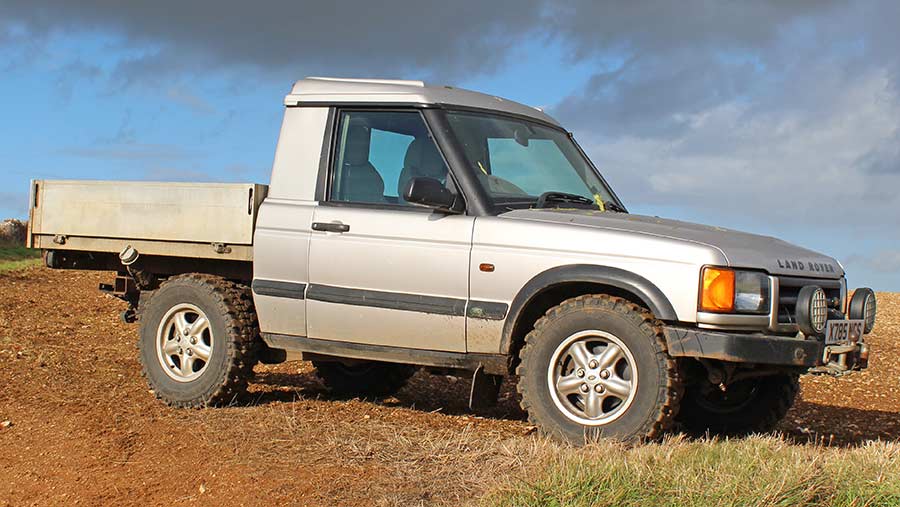 Used Land Rover Discoverys don’t enjoy the same cult status as the iconic Defender, so when the rot sets in, values hit the floor.

That means MOT failures can change hands for giveaway sums of as little as £500, even when the engine, transmission and running gear are still in fine fettle.

For those with a little mechanical nous, this presents a potential off-road bargain. Underneath that soft-roader exterior lies virtually the same chassis and running gear as a Defender – prices for which are now bordering on the ridiculous.

Wiltshire-based engineer Clinton Trump – trading as Longranger 4×4 – realised this potential some years ago, and as a result came up with a low-cost kit to turn tired Discos into useful single-cab pickups. It’s offered on his website for £690 or £850 including a rear sliding window (inc VAT).

The installation job involves slicing off all the rear bodywork to expose the chassis rails, before fitting a fibreglass cab back and roof panel. Various different load beds can then be grafted on where the rear seats and boot would have been.

One of the beauties of the kit is that is makes it blissfully simple to patch up rot in the rear chassis rails, which is one of the main culprits for putting these trucks off the road. It’s a notoriously tricky repair with the body in-situ and therefore the cost to have it done is usually more than the vehicle is worth.

All 200-, 300-TDI and TD5 Discovery models share this same ladder-type chassis, so any vehicle built between 1989 and 2004 is ripe for conversion. The reliability problems with the later Discovery 3 means Clinton hasn’t even considered modifying these.

For those wondering which model to plump for, all are pretty sound contenders. The 200- and 300TDI engines are both fairly hardy and although there have been some horror stories with the TD5, well-maintained examples generally last well.

Rear air suspension on the TD5 can also give trouble, but it’s simple enough to replace with coils. Interestingly, the truck pictured above is still running fully functioning air bags.

Getting the main conversion work done should take a couple of mechanically minded individuals about two days. However, the finishing touches and attaching a decent bed to the rear will add a little more to the timescale.

The kit itself is made up of two moulded fibreglass sections – one that forms the back of the cabin and the rear corners, and another for the roof. The chop job leaves most of the vehicle’s structural members in place, so the cabin should be just as tough as it was before. However, those that want extra protection can add a roll frame.

Clinton has an in-house fibreglass expert who works with him to make the moulds and panels from scratch at his workshop near Marshfield on the Wiltshire/Gloucestershire border. It’s the pair’s own design, but the inspiration came from a modified Range Rover Classic they acquired from the now defunct coachbuilder Glenfrome of Bristol.

Getting it on the road

As the chassis, engine and running gear is unchanged, the vehicle is still classed as a Land Rover Discovery and theoretically should have the same 3.5t towing capacity and 0.5t payload. However, the removal of the heavy rear body and interior means it can cope with a good bit more than that.

Apparently it is possible to get the trucks re-registered as commercial vehicles, but this does require calling the DVLA out to inspect it. For this reason, it’s probably easier to start with a commercial-spec donor vehicle in the first place.

Some people have also registered them as limited-use or agricultural vehicles to avoid tax and allow them to be run on red diesel, but this brings with it some considerable limitations.

For those interested in re-registering vehicles such as this, it’s worth taking a look at our recent guide to the process: https://www.fwi.co.uk/machinery/converting-4x4s-red-diesel-stay-road-legal

Clinton has also looked into the possibility of building a double-cab version, but sadly the chassis just isn’t long enough to accommodate it. It is possible to extend it, but the additional work, paperwork and expense means it’s not really worth it.

How to fit the Longranger kit 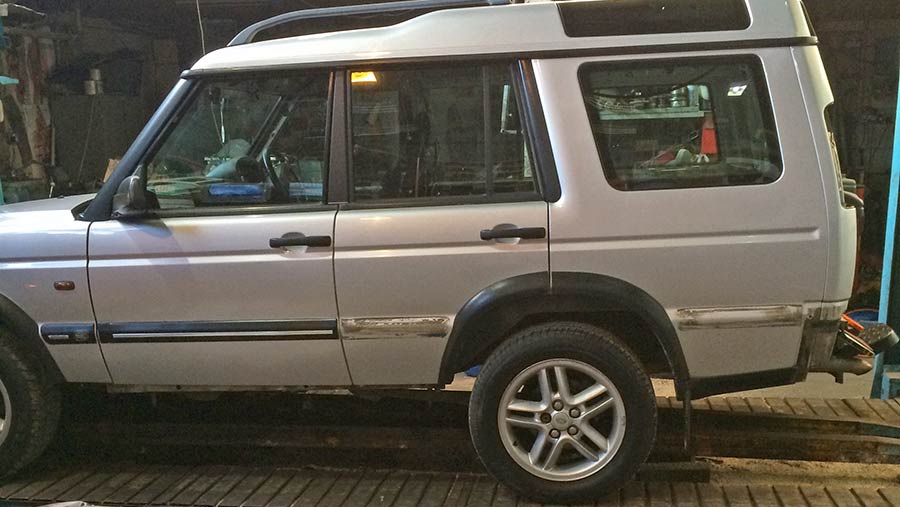 Start by stripping out the interior and removing all trim, doors and glass to make the back-end as light as possible. Also, free up the wiring loom so it can be pulled forwards and remove the bolts that hold the rear body to the chassis. 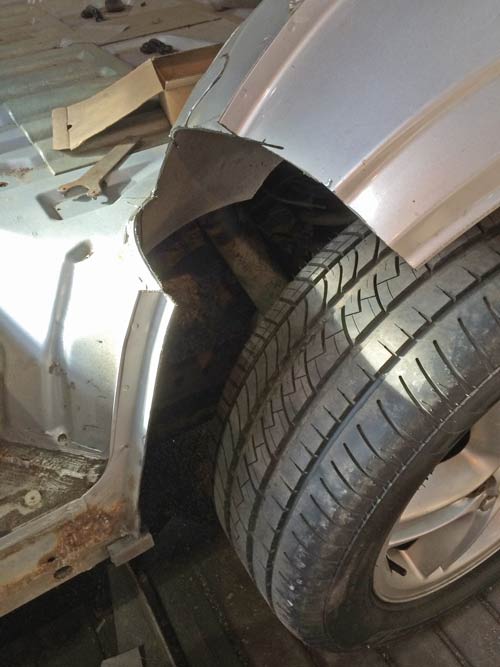 Cut sections out of the rear mudguards to make space for the angle grinder when tackling the main cut through the floor pan. 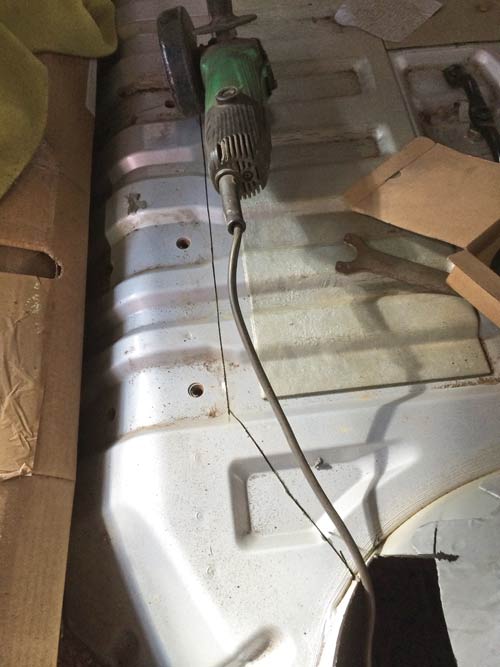 Run the angle grinder straight across the floor pan behind the chassis member. Take care to make sure you’re not slicing through any pipes or cables. 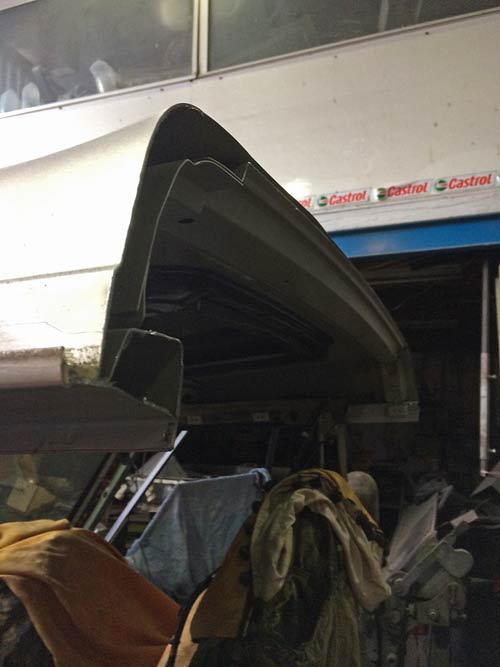 Cut through the roof behind the strengthening brace. With this cut performed, it should be possible to carefully lift the back end away with a loader, or by hand if there’s plenty of muscle nearby. 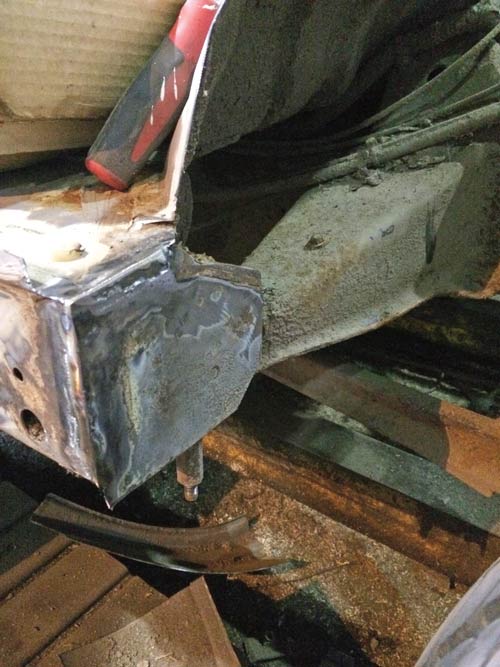 Cut the bottom section of the rear mudguard back to the chassis member and plate up the sills, if needed. 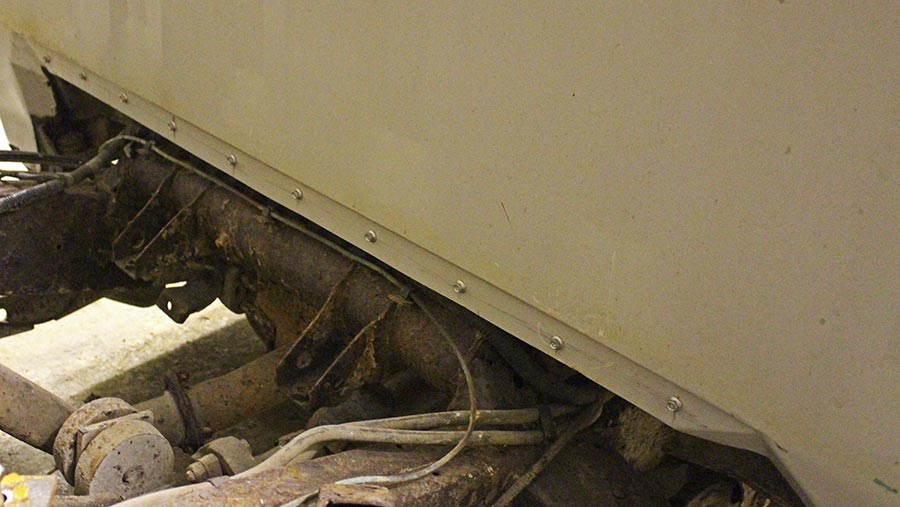 The back fibreglass cab section can now be offered up and tec screwed to the back of the floor pan. It also wraps round and is screwed to the front door shuts and pillars. The panels are available solid or with a rear widow, which is the same unit used in a Defender 90 station wagon. 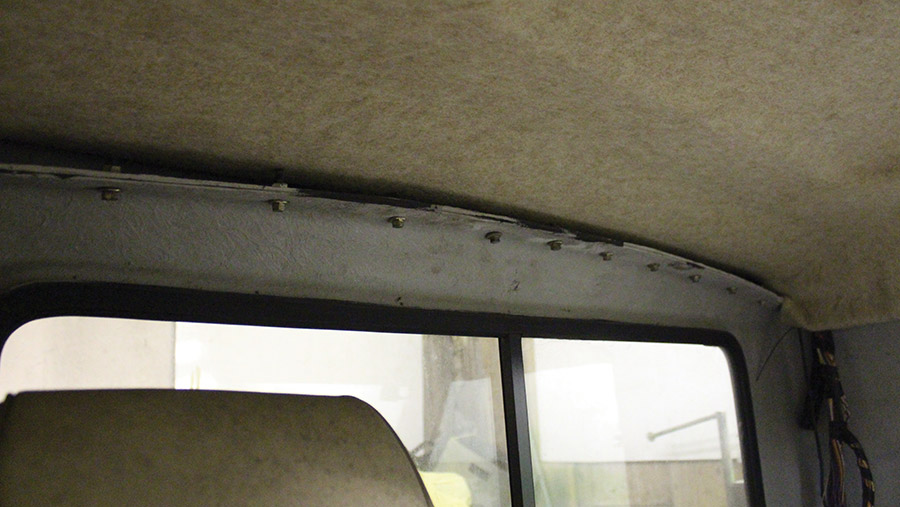 The roof panel is then lifted on and bolted to the back panel as well as bonded to the original roof metal at the front. The slightly-higher-than-standard profile of this part means it will also fit models with a sunroof, thus covering over this notoriously leaky addition. 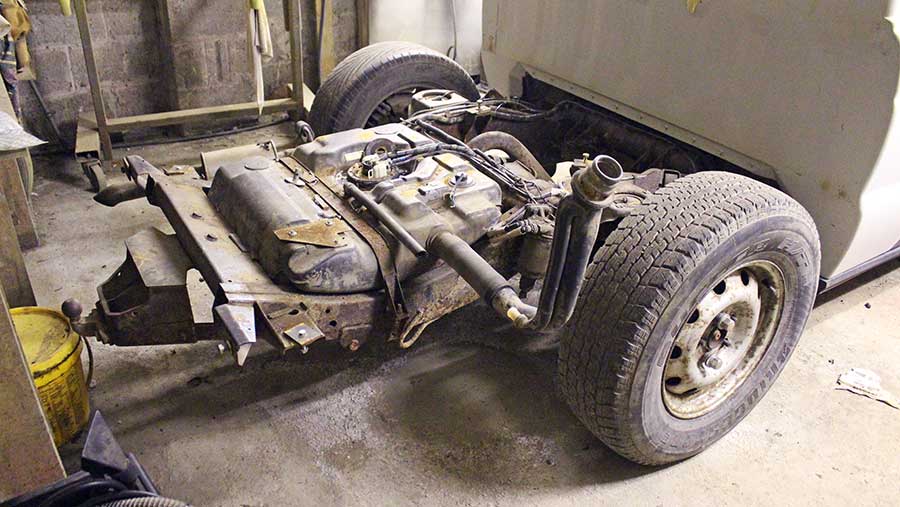 With the rear body removed, it’s a simple job to lift out the fuel tank and plate up the chassis rot. 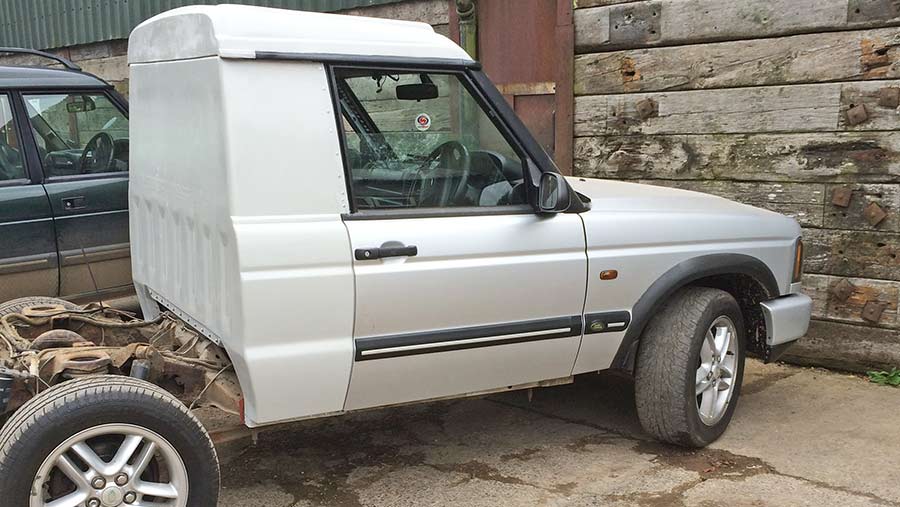 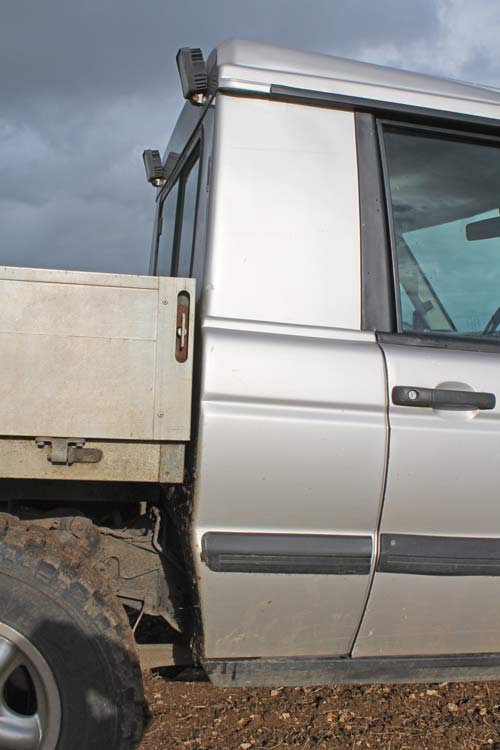 With the kit fully installed, finishing touches can take place, including paint and both external and internal trim. However, some people who want the truck purely as a work vehicle will just leave it as it is. The original wiring loom can also be used to power new lights mounted at the rear. 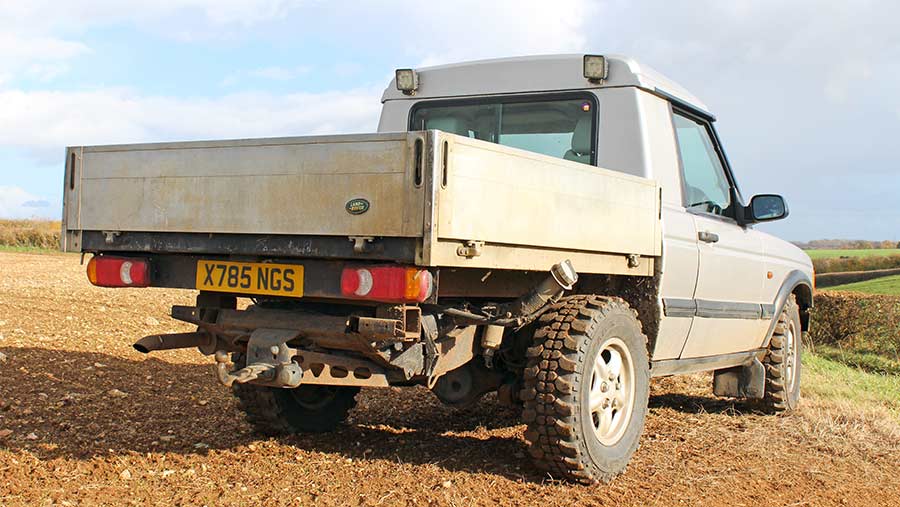 The exposed rear chassis can be fitted with almost any form of load bed, including this chopped-down aluminium number from a Ford Transit. Some trucks have been given something as simple as a flat sheet of marine-grade ply, while others have been treated to high-end tipping beds. Clinton also offers moulded wings and tailgates to create a smoother look, more like mainstream pickup trucks. 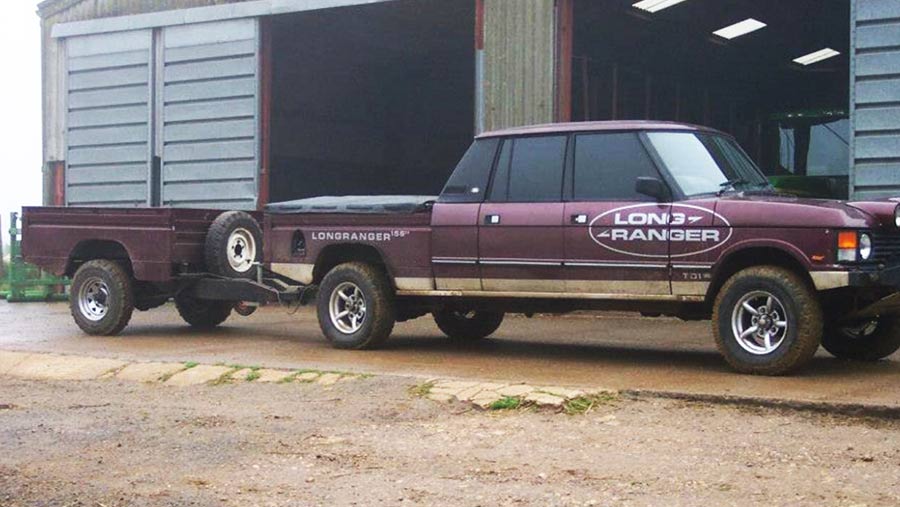 Over the years Clinton Trump has created a catalogue of weird and wonderful Land Rover-based conversions, both for farmers and the leisure market.

This includes building a Land Rover Defender-type vehicle for £6,000 and a self-contained livestock truck, both using old Discovery underpinnings.

He has also made his own stretched double-cab Range Rover pickup – called the Longranger – and a V8-powered off-road racing buggy.

A current project is converting a six-wheel Range Rover Classic fire tender into a long-wheelbase pickup.