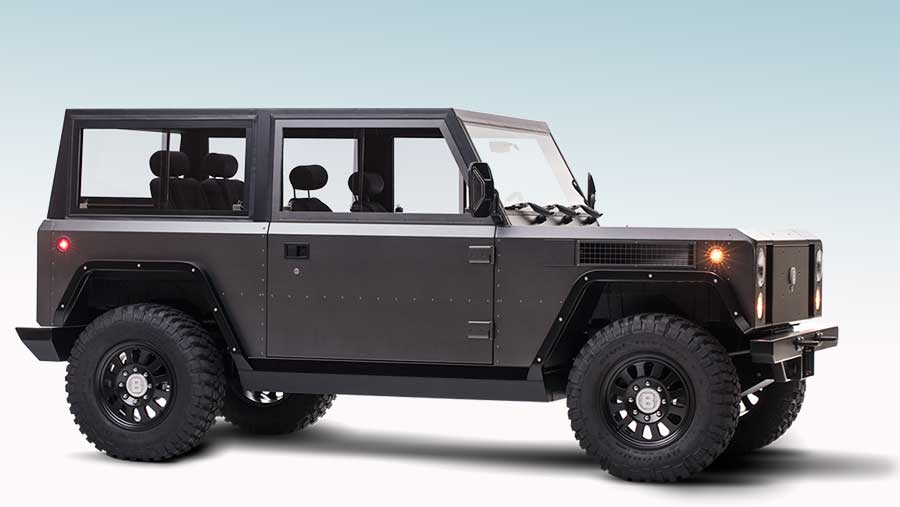 If you are still mourning the loss of the iconic Land Rover Defender, it seems Christmas may have come a few weeks early, as New York-based Bollinger Motors has allowed a peek at the fully electric prototype model it has been building.

The Bollinger B1 is a no-frills, stripped-back, boxy version of farmers’ favourite run-around vehicle (I know, we didn’t think it was possible either).

However, some impressive stats are being shouted about, with the B1 offering 360hp, all-wheel drive with a high- and low-range box and enough juice for a 200-mile range with the largest power pack. It can also tow 2,700kg.

And that’s not the only carrot. By ripping out the rear seats and doing away with any kind of creature comfort, a monster rear load space of 2.69cu m is available.

In real terms, that adds up to a stack of 2,400×1,200mm plywood boards with the back door shut, while the rear hood can also be removed to make it a half-cab rather than full.

If it is fencing materials you need to shift around the countryside, the B1 can also open up its front nose – where the engine would usually be – to offer clear access from front to back, with the company claiming that 24,600×1,200mm posts can be laid through the middle of the truck.

Tipping the scales at just over 4,500kg means it is certainly no pond skater, with extra weight coming from two electric diffs – one for the front and the other at the rear.

There is a choice of two batteries as well – a 60kWh and the larger 100kWh, with the latter taking about 12 hours to charge from empty.

Inside you get two Defender-style front seats and two removable ones in the rear. The vertically mounted dash dials and naked steering column has more than a whiff of early series-1 Defender about it.

There is no production start date as yet, so even if you are interested, it won’t be under your tree this festive season.