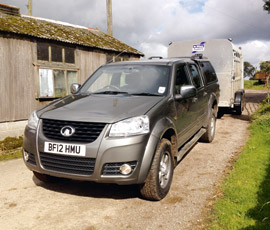 The price of a new four-wheel drive motor is rocketing – your average new doublecab pickup will cost you the thick end of £25,000. The stage is set, then, for a new budget pickup.

It might sound like a naff Chinese takeaway, but the Great Wall (or Wingle as it’s affectionately known in Australia) has proved popular down under. And it looks like it might have the spec and price to challenge some of the UK’s well-established truck brands.

Remarkably, for a country that has a factory to build almost every item and implement known to man, the Great Wall is the first Chinese branded pickup to go on sale in the UK.

That’s partly because the Chinese car market still has a reputation for dodgy knock-offs – the sort where the doors fall off when you slam them shut. But the same was said of Skodas in the 80s and the Koreans (Kia and Hyundai, for instance) in the 90s, so let’s give the Great Wall a chance.

Hold your horses, though. The South Koreans have also had a stab at building a budget truck. Ssangyong isn’t a company known for its pickups, but the Korando Sports looks pretty tidy at first glance.

“I thought you were testing a pickup,” were Dad’s first words as I pulled up outside the workshop in the Ssangyong. He’s got a point.

From the front it looks like a very near relative of the Mitsubishi ASX. The big, black grille and BMW X5-style hawk-eye headlights make this a good-looking, bruiser-class car. Sorry, pickup. But it is very car-like.

There’s little to tell the Steed apart from any of its popular Japanese rivals. It might not look as swanky as the Ssangyong, but chrome-splattered, base spec S models are still treated to 16in alloys and body-coloured bumpers.

The posher SE version gets a few extras, but if you’re buying a budget truck then you probably won’t want to pay more for chrome sidebars and rear parking sensors.

The interior is the main victim of the cost cutting, but neither has skimped on extras. Buyers of the Great Wall are treated to the sort of luxuries you’d usually have to trawl the options list for. Air-con, steering-wheel-mounted controls and leather seats are all there. 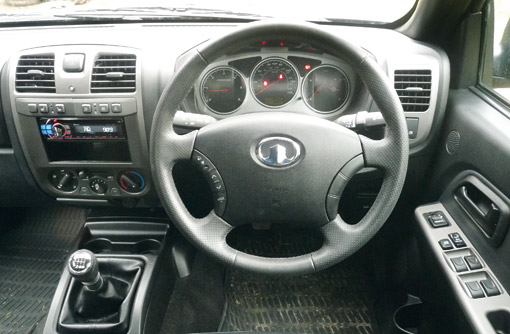 Inside the Great Wall Steed

OK, so the finish isn’t really top-end, but that’s not what you’d expect or probably want. The leather seats might have been made from the hide of a 30-year-old rhino and the electric windows shudder as they rise. The Steed’s switchgear also has an early millennium feel to it and the speedo can be tricky to see on a dull day (unless you’ve got the lights on). There’s no clock on the dash, either.

It’s a similar story in the Ssangyong – generous spec is the order of the day. Here, too, the workaday dash area is a casualty of the small build, although the general quality does outdo that of the Great Wall. The Korean plastics should stand up to the perils of farm life for a couple of years too.

Should you go for Ssangyong’s fancier version (the EX) you can have heated seats and a flimsy stalk behind the steering wheel to turn on cruise control.

There’s also the small matter of the safety system. Like its SUV sibling, the Ssangyong suffers from severe bouts of unnecessary bleeping (I had my seatbelt on, honest guv). The answer (in part, at least) is to put a swear box on the dash – you’ll save yourself millions.

Oddments trays are highly prized in work vehicles. The Great Wall scores well here with a central cubby particularly handy for collecting notes, Allen keys, ear tags and other assorted toot. Its Korean rival has enough nooks and crannies to make yourself at home, too.

As for passengers, the Ssangyong will accommodate three big fellas in the rear pews. There’s slightly less space in the Great Wall.

While the rivals are beefing up their engines – Ford offers a muscular 3.2-litre Ranger – our two makers deem a 2-litre motor adequate. In both cases the four-cylinders are mated to a six-speeder.

Both have a farming must – a low box, engaged by fat-finger-friendly dash switches. In high range Ssangyong offers a low first gear – it means there’s less chance of an embarrassing stall when pulling off, but the jump to second gear is wide. Gear changes in the Great Wall are predictably rubbery.

As for economy – both offer impressive figures. We didn’t test either accurately, but Ssangyong’s 38mpg and Great Wall’s 34mpg both seemed a little ambitious.

Doublecab pickups get a pretty raw deal. They are expected to be tough enough for farm life and smooth-as-you-like on the road.

As big trucks go, the Ssangyong is pretty fun to drive. Part of that is probably down to the coil spring suspension. It has been chosen instead of the leaf springs used by the Great Wall – a rather old-hat, but well proven, way of soaking up the bumps. On-road the coils get the nod for comfort. Off-road things are more even.

The 2-litre engines are ample, although aerodynamics do neither any favours when it comes to out-and-out speed. The Great Wall bounces and bumbles its way to a top speed of 87mph. The Ssangyong is smoother and quicker.

The sixth cog is handy for reducing bark and thirst during motorway cruising, but in either you’ll need a clear view of the horizon and plenty of bottle before attempting to overtake Granny in the Nissan Micra in front.

Both fall short in the steering stakes, too. The Great Wall’s is aimless and the Ssangyong fares even worse. The Korean’s four turns of the bus-conductor-sized steering wheel lock-to-lock will test your muscles on roundabout-ridden routes. 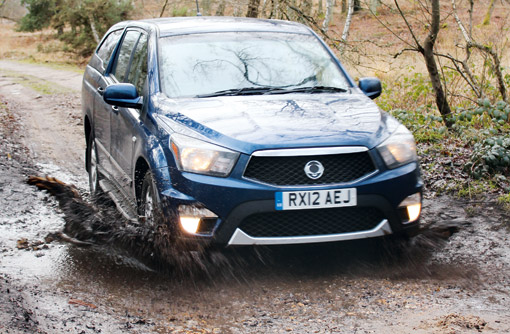 The Ssangyong on the move.

What about on the farm? The main difference lies in the payload capacity. Those coil springs restrict the Ssangyong to 643kg in the back, although it’s not short of space. Compare that to the Great Wall’s 1t – that’s more than a few extra bags of cake.

Strapping bulkier loads down is awkward on both. The Great Wall makes an effort with feeble plastic hooks, but they’re on the inside of the tray so they’re hidden once you’ve got a half-decent load on-board. Also both lack a roll bar.

The plastic rear bumper of the Great Wall – which protrudes six inches – is bound to come off second best to a breeze block wall at some point.

Expensive-looking ridged rear light clusters are equally ill thought out (so maybe that reversing sensor is a good idea).

Top marks go to the Ssangyong hard-top back. It locks with the central locking system (add £1,750 to the list price).

Towing-wise, Ssangyong scores highest with 2.3t the maximum allowed on the hook, while the Great Wall will manage 2t. We found both ample for trips to market and other farm jobs. 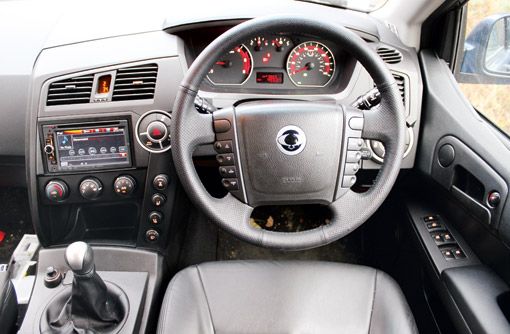 Both these pickups make a good case for themselves.

The Great Wall Steed is a work truck and stands a better chance of attracting a farmer following. It shakes and rattles like a farm truck should, and at £14,000 is just about cheap enough to make it a better choice than a second hand Ford, Nissan or Toyota.

Its lack of load carrying capacity might put some buyers off and it doesn’t wear a prestigious enough badge to appeal to those townie sorts that like driving pickups.

The base spec model also costs £1,000 more than the equivalent Great Wall, too.

That said, both offer five-year warranties – a proposition not to be sniffed at.