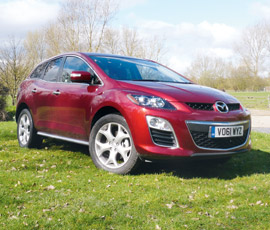 The CX-7 is Mazda’s offering to the ultra-competitive SUV market. It’s bigger, plusher and more generously equipped than your average, but is it better? Oliver Mark gave it the Farmers Weekly run-around to find out

Unless you’ve been residing in Outer Mongolia for the past decade, you will probably have noticed the surge in numbers of a new breed of sporty four-wheel-drive cars.

Mazda’s CX-7 is exactly that. As 4x4s go, it’s pretty tame and you probably won’t find it tearing along hardcore-laden farm tracks too often.

But it does live up to its sporty tag. There are nice splatterings of chrome across the grille and door handles, mammoth alloy wheels and tinted rear windows – just the thing for the city but it might not look quite so swish once it’s half-caked in mud.

Driving-wise the saloon-style car cuts through the air like a hawk-harrier thanks to an almost horizontal front window. It makes things pretty quiet in the cabin – you’d be excused for thinking there was half-a-ton of lead-acid under the bonnet, in fact.

But there is an engine there. Fortunately, Mazda came to its senses and plonked a 173hp four-cylinder diesel in, rather than the thirsty 2.3-litre petrol block that was previously the only option. It’s got bite, but with almost 1.8t to lug about, it’s more chihuahua than tiger.

The sport-tech spec is standard so you’re treated to a pretty swanky interior. Front seats are comfortable and are surrounded by a dash from the Apollo spaceship – there are buttons and dials galore.

That includes a borrowers-sized sat-nav which is almost impossible to see clearly. It is standard, though, as is the phone system and cruise control.

But having a plush, sturdy cabin comes as a cost – visibility is near awful. Lawrence Dallaglio’s thighs have been used at pillars, the rear windows borrowed from a Tonka toy and a bulky rear view mirror hinder views in almost all directions.

In the rear, there is ample space and the boot is adequate (although a lip makes chucking heavy stuff in and out less convenient). It’s just a one-touch job to fold down the rear seats, which creates an even bigger load area.

A diesel engine is a sensible move and you get plenty of features for your money. I’d probably give the CX-7 a miss if you’re planning to do too much hard graft, but it’s ideal if you want some 4×4 power and space for running around duties.