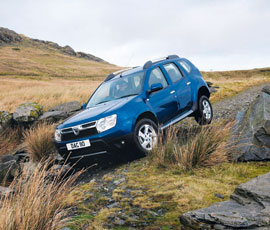 A brand new Dacia Duster has four-wheel drive and it costs less than £10,000. Yep, £10,000. That’s cheaper than a half-decent farm buggy that doesn’t even guarantee you doors or a front windscreen.

Dacia is an offshoot of Renault and has been around in Europe since the late 1960s. It has dipped its toe in and out of the British market, too, but came back with a bang last summer launching the Romanian-built Duster at a mouthwateringly cheap £8,350 (ex VAT).

That’s the budget Access version, anyway, which only comes with an unenthusiastic 114hp, 1.6-litre petrol and offers just the simple things in life – a cigarette lighter, windscreen wipers and seats – and little more. If you don’t want steel wheels and snow-white paint then you can add £470 to the ticket price straight away.

There are two other spec levels that are propelled by 1.5-litre diesel engines, the poshest of which is named the Laureate.

It gets alloy wheels, electric windows and, believe it or not, air-conditioning. You can glam-up the Duster to your taste/needs by adding various accessory packs, too.

Inside you’ll find plenty of handy knick-knack trays and enough low-density, hard-to-touch plastic to make the Duster float. Not so with the steering wheel, though – it’s a leather-coated affair. Steering is weighty (but powered, we’re assured) and the ride is, erm, old-school.

In reality the budget price comes back to bite you in the proverbial in the refinement stakes. Tackling roundabouts at a brisk walking pace is advised if you and your passengers are not to become overly acquainted with the side windows. The suspension is squidgy but just about sneaks into the realms of acceptability. The diesel version really starts to bark once you get over 2,500rpm, but gets out-shouted by the sort of wind noise you’d expect at the summit of Everest.

In the back there’s plenty of space to chuck in a pig or a few bags of feed (definitely raid the options list for the rubber boot liner).

Towing capacity is a modest, but not embarrassing, 1.5t. The fact that the Duster only weighs 1.3t plays to its hand off-road. There’s no low-range box either – too much weight, cost and complexity, says Dacia.

We like what we see. No need to dabble in the second-hand market with prices like these. You can also chip in an extra £395 for a five-year warranty (three years is standard). Better still, if the European stats are anything to go by then the Duster should hold on to its value better than most.