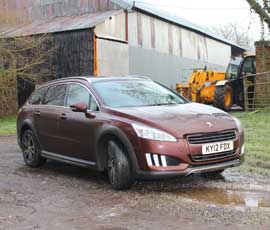 Peugeot’s new 508 is in the same price bracket as German big hitters like Audi and VW, but the promise of four-wheel drive, zero-emissions motoring might appeal to a bigger crowd.

Motive power comes from a combination of electric motor to drive the rear wheels and an oil-burning, two-litre diesel for the front ones. The car can run on diesel, electric or a mix of the two, with wires connecting the different power sources.

Working in tandem, the pair offers 200hp (split 163hp diesel, 37hp electric). Electric muscle is provided by a nickel-hydride battery buried in the boot. This soaks up power during deceleration and braking to keep the electric supply well stocked. Good stuff, except that the battery hogs potential spare wheel space.

The main problem with this mishmash of power supplies is if you break down – which this one did – the AA man stands little chance of fixing it on the side of the road. And because it’s heavy enough to sit opposite a bull elephant on a seesaw, you can’t tow it anywhere, either.

In what is best described as “milk float” mode, the car runs straight off the battery. It managed from home to Tesco – about two-and-a-half miles – of emissions-free, whisper-quite motoring.

The exact distance depends on the amount of juice in the batteries and top speed is about 30mph.

When you have to go faster, or further, the engine will automatically kick in if you haven’t adjusted it yourself.

The spec sheet quotes combined consumption as a whopping 68.9mpg – the equivalent of driving from Big Ben to Northampton on a small plastic jerrican’s-worth of diesel.

In reality this is near impossible, even with granny in the driving seat and an egg under the throttle. We managed just above 52mpg at best.

Top marks go to the handling. Ride height has been pumped up by 50mm, but it still clings to the ground around corners like a spider in the sink. The steering is light and the suspension is firm, which makes for comfortable cruising (but a shaky ride over potholes).

In the countryside? Blame the batteries and 2t weight for the pretty feeble 1.1t towing capacity. Light off-road duties are fine, but we’d probably give boggier fields a miss.

Spin a central dial to select the driving style. For silent sneaking around town, pick ZEV (it stands for zero emissions vehicle) where power comes courtesy of the nickel-metal hydride battery in the boot.

The four-wheel drive option is pretty self-explanatory – it makes use of both power supplies to drive all four wheels – and auto mode leaves the car to pick and choose between diesel and electric power supplies. Sport mode offers more enthusiastic gear changes and a generally keener engine.

Six speeds are squeezed into the auto box. In auto mode – which you’d spend most of your time in – the 508 is slow out of the traps. There’s no double clutch or torque convertor unit, so it takes a few seconds for the sleepy transmission to wake up once you’ve jabbed the throttle.

It has a tendency to dawdle at traffic lights and busy T junctions. Gear changes further up the range are also sluggish. There are two ways of overcoming this.

Switch to ‘sport’ mode every time you need to pull away (there’s a fuel penalty for this) or make use of the normally redundant flappy paddles to make gear changes more sprightly.

Once you’re up to speed, cruising comfort is first-class. So, thumbs down for stop-start trips, but a big thumbs up for the long-haul stuff.

The lurching stance and dark alloys score highly in the looks department and inside things are just as plush.

A cricket-pitch-length roof window lights up a chrome-splattered interior. It’s full of automatic functions, too.

Finger through the pages of gadgets and you will find keyless start (nice, but there’s nowhere to put the key), a massaging driver’s seat (although nothing for your luckless passenger) and auto-dipping headlights. 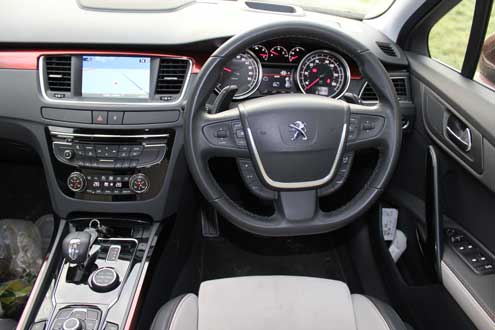 The Peugeot people have done the maths and reckon 90% of these hybrids will end up as business cars – it’s the only way that the numbers really stack up.

Should you buy one? Probably not. How much the electric motor part adds to the equation is questionable and there are too many compromises – notably cost and weight – without delivering the promised 70mpg economy. It’s also likely to depreciate at a rate of knots.

Comparatively, rivals like the VW Passat Alltrack are cheaper and can deliver almost equal fuel economy.

That said, it’s a well-specced car and if you’re eating up plenty of motorway miles it could be a good choice.