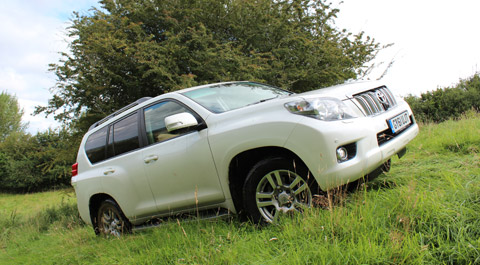 Japanese car giant Toyota has given its Discovery basher a facelift. James Andrew and Oliver Mark got their hands on the latest Land Cruiser

It’s the vehicle of choice for gun-wielding extremists, bullet-dodging aid workers and those gnarly explorer types who only want to drive on the bumpier parts of the globe.

But stuff a gold-encrusted oil baron in one and he’ll be happy, as will the home-counties mum posing in the playschool car park.

The Toyota Land Cruiser might have been around for donkey’s years, but it’s managed to earn itself an enviable reputation for being rough, tough and pretty plush in one reasonably priced package.

Now there’s a new one, but has it got what it takes to uphold the family honor?

The first thing to note is that this latest update has been made to the smaller – but still huge – LC-Series. These trucks first appeared in 2002, replacing the Colorado and were squarely aimed at taking on the Land Rover Discovery and Mitsubishi Shogun. Meanwhile, the bigger Amazon (now the V8) butted heads with the Range Rover.

The new LCs come in three spec levels – LC3, LC4 and the fully-loaded LC5 that we got our grubby mitts on.

While many of the luxury off-roaders have turned to fancy aluminum monocoques, the Land Cruiser has kept things simple.

Underneath there’s still a hefty, separate steel chassis and that means it’s great for hauling around heavy loads. Surprisingly, official towing capacity is not as high as you’d expect at 3t, but you can be safe in the knowledge that the lump of iron under your backside isn’t going to twist.

There is a penalty for all this brawn, though. On the road, the Toyota feels a tad crude compared to some of the other off-roaders on the market. Body roll is considerable, even though the chassis has been stiffened, and the ride is pretty wallowy.

But none of this really matters because it’s when the going gets tough that the Land Cruiser comes into its own.

Opting for the LC5 gives you lots of clever electronic wizardry to help keep you going when nature would rather you didn’t.

This includes variable suspension with height control and a Discovery-esque system that automatically sets the truck up for different terrain.

There’s also a set of four cameras dotted around the car to help you avoid those boggy holes and wayward gate posts.

But fancy electronics aside, the LC5 has a proper set of off-road tools under the panels. All models come with a locking central diff, and the LC5 gets one on the rear axle too.

Rugged it might be, pretty it isn’t. Ever since the first slab-sided model rolled off the production line back in 1955, the Land Cruiser has been something of an acquired taste.

Things have improved a bit with this latest model and it has a certain bullish charm, but it’s unlikely to win any beauty contests.

Firstly it seems to have been taking its nutritional advice from heavyweight David Haye. Bulbous wheel arches have sprouted all round and there’s now a fat, towering grill, dripping in chrome.

But despite its bulky appearance, the tape measure shows that it isn’t really any longer or wider than before.

Inside it’s well screwed together, but the suspiciously plastic looking wood trim doesn’t do it many favours – the black plastic in the LC4 is a better look in our opinion.

The rest of it is fairly uninspiring, but at least it’ll still be in one piece after the kids have worked their magic on it.

In the LC5 there are seven decent-sized seats fitted as standard and you can even squeeze a couple of adults in on the back row for short journeys. With the rear seats up, you’ve got precious little boot space, but they do fold completely flat at the touch of a button.

The Land Cruiser LC5 comes with a 3-litre, 4-cylinder engine that pumps out a modest 188hp and 410NM torque. This is fine for off-road duties, but it’s far from sporty on the road.

Fuel economy isn’t really a strong point either. Toyota’s gives a figure of 34.9 mpg on the combined cycle, but we struggled to get anywhere near it. During some fairly average motorway driving it seemed to hover more around the mid-to-late 20s.

In the cog department, nearly all models will be fitted with a fairly uninspiring five-speed auto box. This does give you pretty good control off road and because the engine has plenty of low-end torque it performs well when towing and climbing steep banks.

It’s not that smooth on the road though and suffers the old auto box clunky kick down when you burry your foot to overtake.

The Land Cruiser is one of the last of the original luxury off-roaders left and while it might lack a bit of finesse on the road, it really comes into its own on the rough stuff.

It’s good for towing and because it has a proper chassis and locking central and rear differentials it’ll go just about anywhere.

Looks wise, it isn’t the most inspiring. But if you opt for the right color (possibly not the pearlescent white we had) it’s perfectly acceptable and less chintzy than many of the 4x4s out there.

So if you want a competent off roader, that’s comfortable, reliable and doesn’t make you look like you’re showing off, you won’t do too far wrong with this latest Land Cruiser. It would be nice if it drank a bit less diesel though.