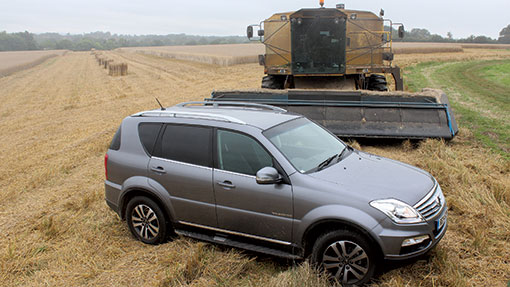 The Ssangyong Rexton is an old-school, bargain-basement workhorse. Oliver Mark finds out what you get for your dosh.

While its northern neighbour has spent the past few years showering the South China Sea with missiles, South Korea’s favourite 4×4 maker has been busy peppering the UK’s shores with well-priced off-roaders.

Ssangyong spent its formative years under the automotive radar of many western markets, a factor that probably contributed to its decline in 2010 to the brink of financial ruin.

However, a last-minute salvage deal acted as a boot up the manufacturer’s backside, leading to a flurry of new models including four 4x4s aimed at the price-conscious buyer.

The latest model to be renovated and reintroduced is the Rexton. A Mercedes ML lookalike from the outside, the Rexton has some pretty high-rolling rivals in its size and weight division.

But, while the real Mercedes has a ticket price a few quid north of £50,000, a cheque for just half of that will land you a top-notch Rexton.

From the outside there’s little to tell the poor man’s Mercedes apart from the real McCoy, except for a bit too much Rexton badge-work. And, while Ssangyong’s earliest models seemed to hit every branch on the ugly tree, the newbie’s tinted rear windows and 18in alloys should appeal to most markets from London gangsters to country gents.

Mercedes-esque body panels aren’t the only German influence. The company also offers up an automatic five-speeder – the one we tested – which has more than a whiff of the 1990s about it. If you care about the environment then the six-cogged manual is the more butterfly-friendly alternative.

Gearshifts on the auto are a little agricultural if you’re in a hurry. The transmission clunks unapologetically up and down the gears and the engine shouts loud and hard between switches.

The shortage of gears dishes out further punishment in the fuel consumption department, which can make painful reading. Even with Granny in the driver’s seat you’ll do well to better figures in the high twenties, while more expensive, equally-sized foe are purring along the UK’s roads to the tune of 35mpg.

It’s a snail from the start line, too, and top speed comes at a premature 110mph, though it feels a lot faster. The one saving grace is cruise control – it is standard fare and gives you a better chance of eking out decent economy from the tank.

Just like the Korando Sports pick-up, Ssangyong has dealt the Rexton a rather stingy hand in speccing a smaller-than-average two-litre engine.

Maximum power is a modest 155hp – less than plenty of estate cars – yet it rarely feels out of puff. It makes the right noises, too, roaring like a hungry dinosaur as it squeezes every last mph from each gear.

It’s also capable of towing 3t. That might make it a little weaker than the 3.5t norm for a car of this size but it’s unlikely to be a deal-breaker given the price. 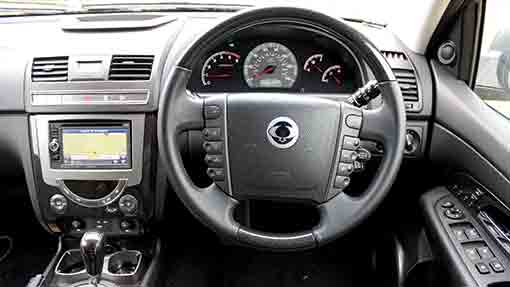 Before you check the inside of this Mercedes imposter, you’ll have to unlock it. That’s problematic because the unlock and alarm controls are on the same button. Cue lots of beeping…

Once safely inside you’ll find an interior of mixed heritage. Some, like the digital dash, is unmistakably cheap and Chinese, and brings any ideas of the Rexton being a premium SUV thumping back to the ground.

The 4×4 controls also have a pretty last-century feel to them – a simple twist-dial switches drive from two to four wheels and clunks in the diff-lock, too.

Other patches are nice – faux leather seats are electrically adjustable and pretty comfortable and, better still, they extend to three rows and can carry six passengers.

Obviously, catering for a third row of troops restricts boot space significantly, but you can flop the seats back down to improve space.

There are more similarities with the Korando pickup in the controls department. They’re predominantly plain Jane, and both share the same button-infested steering wheel. Standard in-flight entertainment gear includes a CD player and iPod connectivity, while the more expensive package gets you DAB radio and a satnav.

It’s a bit of a tank but undeniably good value. Not a particularly smooth operator on the road, but I liked it. There’s also the added bonus of a five-year, limitless mileage warranty.