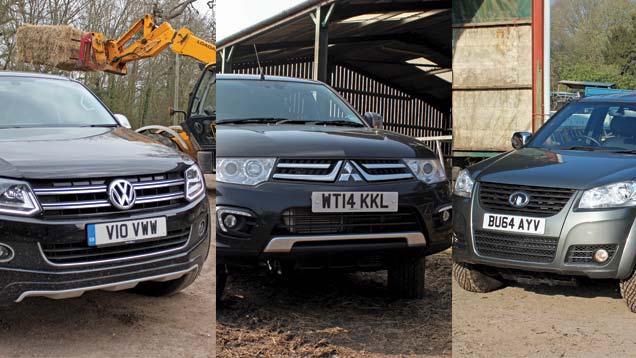 Pickups once had a diehard following of builders, farmers and countryside types, but that relatively niche audience is no longer the priority for truck builders.

The market has been invaded by leisure buyers that have spotted an appealing gulf in price between pickups and that bastion of modern-day motoring, the SUV.

Pickups offer four-wheel drive, five seats and most of the mod-cons at a fraction of the price of the average family wagon.

Mercedes, Fiat and Renault have all deemed it lucrative enough to throw their considerable weight – and cash – behind new machines, while Nissan, Toyota and Ford have also been building replacements for their slightly grey-haired workhorses.

Volkswagen and Mitsubishi, whose vehicles we have featured in this test, are due to reveal fresh-faced replacements in the next year-or-so, too.

We put the two of them up against a relative old-timer on the pickup market – the Great Wall Steed. Here’s how they fared.

If you like to mix business with leisure then the Amarok is, by a distance, the most comfortable to drive long-haul. The Ultimate edition, of which VW is only building 500 for the UK, is a particularly plush (but depressingly expensive) version.

It is built like the proverbial outhouse. Up front there is a VW badge big enough to make the average Joe feel like a Borrower, while the 2t of chrome and 19in alloys should appeal to those that count hare coursing and bare-knuckle boxing among their primary hobbies.

The downside to that unforgiving, brick-like shape is the workload it leaves for the poor little 2.0-litre engine.

On paper it is tuned to squeeze out 180hp, but it has to work hard to keep the Amarok moving and has probably been the cause of a few blown turbos in the past.

That said, it has got the same size engine as its Chinese rival and delivers a far peppier performance.

Throttle response is keen and, even if the L200 is the most capable with a trailer behind, the Amarok’s 2.0-litre performed better than expected.

It drives through a six-speeder, though the notchy gearstick means there is a tendency to snatch at gears on the road.

Compared with its two rivals it is supremely comfortable and old-school leaf protection at the back doesn’t seem to hinder handling like it does in the others. Steering is typically VW-accurate and puts it in clear first place in the handling charts.

Despite all the glitz and glam outside, the interior is plain and comfortable.

A properly integrated satnav is a better bet than Mitsubishi’s retrofit Kenwood and most of the information is also displayed on the dash for convenience.

Steering wheel controls can manage your phone, music and adjust the dash display to show things such as fuel consumption and the navigation.

Seats are fabric rather than leather but come with heaters and are more armchair-like than those of both the L200 and Steed. A good balance between fashion and function, we say.

China’s answer to the farm pickup is the Great Wall. Though it has been popular in the southern hemisphere, sales in the UK have been sluggish.

From the outside it is difficult to see why – it steals the beauty pageant crown from the Amarok and cuts a well-proportioned figure in the yard.

However, dig a little deeper and you begin to realise why you can pick one up for a few grand less than the rest.

The plastic rear bumper is frankly useless, while the plastic-lined loadbay has a set of plastic hooks too fragile to survive much heavy-duty strapping down.

The fit and finish is budget, though the essentials are all there. Leather-ish seats stand a better chance of coping with wear and tear and can be wiped clean, while buttons high on the dash engage low- and high-range four-wheel drive.

You can chuck heated seats and all-round electric windows into the mix, too, and there is even some groovy (though slightly random) tyre pressure and temperature information that appears on the rear-view mirror as you turn the ignition.

The retro digital clock of the previous model has been replaced by something a little more 21st century, and you can even get radio controls on the steering wheel.

Fan and air-con controls are pretty workaday but fine if the pickup is going to spend its life axle-deep in dirt.

Like the Amarok, Great Wall pickups get a 2.0-litre engine. It lacks notable punch and there is a slow uptake of power as you stab the throttle, which means you will need a clear gap to pull out at a junction.

The aimless steering is also underwhelming – it feels as though someone has slipped a couple of McDonald’s dinner trays under the front wheels – while the shivering rear-view mirror needs to be held still to prevent the driver going boss-eyed when looking rearwards.

This is where the predicament lies. The Steed costs peanuts compared with the Amarok and is a perfectly good workhorse for anyone that spends their time off-road. But if your job involves travelling, think a little harder.

After nine years of loyal service, the current generation of the L200 is due to bow out later this year.

It has served its time well, reigning over a period of huge success for Mitsubishi and narrowing the gap between work vehicle and SUV. But it is clear that the existing model is now beginning to show its age.

From the outside it is a long, rangey looking thing. It wears plenty of chrome too but, crucially, with the election votes counted, it didn’t have quite enough to beat the Amarok to the magpie vote.

Those who buy on value for money will be pleased to see the spec sheet littered with goodies. The reliable old man of the pickup world still gets a reversing camera, satnav and heated seats, though the quality and usefulness of some of these is dubious.

The satnav, for instance, is a Kenwood retrofit with a sense of direction worse than a disoriented four-year-old’s, while the switches for the heated seats are completely hidden from view.

The rest of the interior is an odd mix. Racing-style seats juxtapose a long-in-the-tooth five-speed gearstick that shakes and shivers as you amble down the motorway. A retro LCD screen to display things such as fuel consumption sits directly below the Kenwood add-on.

But if you fling a few more quid at the salesman you will get the higher-spec Warrior or Barbarian version with a meatier-sounding 175hp and 400Nm torque.

The engine is one of the prime reasons for the coming update, and you can see why.

Though there is no shortage of torque through the rev range, it is a bag of nails at slow speeds and the sound gets even more gravelly as you pedal faster.

By about 2,500rpm you will be reaching for the earmuffs, and not far beyond that it is easier to communicate with passengers via sign language. A sixth cog would really help calm the din in the cabin.

While we are on the topic of things to improve it is worth mentioning the long steering wheel gearing.

It takes an eternity of get from lock-to-lock, though it somehow still manages to beat the Great Wall to second place in this department.