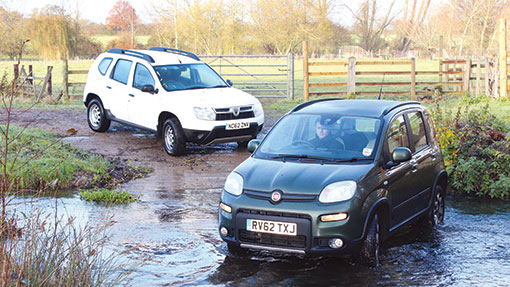 Prices of new four-wheel-drive cars might be soaring but Oliver Mark still managed to find a pair that can each give you change from £15,000.

We’ve found a solution – or maybe a couple of them – to the unending rise of car and fuel prices. It’s a choice between two of Europe’s cheapest cars and will provide the solution to your entire car-buying woes. Well maybe…

At first glance our test cars – the Fiat Panda 4×4 and Dacia Duster – have about as much street cred as a granny in a tracksuit. But both makers aim to coax people away from the second-hand market by offering bargain prices that mean you pay less per month than for a gym membership.

I should probably come clean, here, too – I have a soft spot for cheap four-wheel-drives. Just like ugly people, ugly, cheap cars usually come with a half-decent personality.

Let’s deal first with Dacia. It’s a Romanian company owned by Renault but builds its 4×4 model in India. It’s also one of the fastest-growing car companies in the world, turning out vehicles that are designed for unfussy buyers who want low prices.

Meanwhile, the Fiat Panda is an icon of off-roading. Head to any European mountain wilderness and you’ll see one, probably made 25 years ago and being driven by a little old lady, and probably scooting past the rusting carcasses of more expensive craft.

Yes, you get an engine. It can be a 1.3-litre, 75hp diesel, or a slightly more powerful 0.9-litre, 85hp petrol in the Panda. The three-cylinder diesel is a reliable choice and can realistically deliver up to 55mpg if you drive conservatively. However, the four-cylinder is both loud and clattery getting up to speed and hard on the ears once you’re there.

If you want something a little quieter then the two-cylinder petrol version is the one for you. It’s powerful, too, but having a two-pot working hard at high speeds means the fuel efficiency figures will crash once you leave the safety of suburbia.

The Duster offers two Renault-made motors. If you’re after a farm runabout then go for the 1.5-litre diesel. Fuel consumption should realistically tickle 50mpg – however, that’s only available in the higher-spec models.

If you want the absolute back-to-basics machine, which is the one we had, then you’ll have to put up with a 1.6-litre petrol. It has to be worked hard to get anything out of it and consumption hovered around the 30mpg mark. It’s quieter than the Panda, but you do get through the fuel more quickly.

The Duster has a six-speed manual gearbox. Its first gear is particularly low – fine if you’re off-road but it can mean things are a bit slow and jolty when getting going on the road. The stick can feel lost in its gear channels, too, but you get used to it soon enough.

However, the on-road stats suggest performance leaves a little to be desired. Top speed is a modest 99mph at full puff and 0-62mph comes in 12.8 seconds. It means you won’t get out of the slow lane too often (unless you’re willing to eat into your consumption figures).

The Panda, meanwhile, has just five manual speeds selected by a gearstick sat high-up on the centre console. It feels notchy but you can chop between gears quickly when you fancy putting your foot down.

There’s nothing to separate the pair’s top speeds, with the Panda also managing 99mph, but you’ll have to wait 14.5 seconds to reach that magical 62mph.

The Duster’s exterior design is brutally basic and if you go for the cheapest version you can only have a Daz-white paint job and 16in steel wheels. Not quite the cutting edge of car design, but a few bumps and scratches will soon etch personality into the paintwork.

You’ll get what you pay for inside, too. Plastics are cheap and scratchy and the dash display is as refreshingly basic as a cold shower.

In style terms, the Panda is a step above its Romanian rival. It’s a cute-looking thing, nicely proportioned and with decent ground clearance. Body-coloured bumpers, roof rails and alloy wheels all come as part of a generous standard package, but that has base price implications.

The interior is nicely decked out, too. Quirky Italian design comes to the fore with glossy piano black finishes and funky controls. There’s also way more in the on-board toys department.

Boot capacity is 225 litres, which is larger than you might think. It’ll also tow 900kg – ideal for bulkier stuff and pretty reasonable given its diminutive dimensions.

On the road, the Duster handles like it’s had 10 pints. It swings around roundabouts like a heavily intoxicated pub-goer and is a distant second to the more nippy and well-controlled Panda.

Off-road, the pair shares one common feature – both are lightweight. The Panda weighs in at a paltry 1,115kg and the Duster at 1,250kg, which means both can bumble along the surface of muddy ground like a pond skater.

The Panda also comes with all-weather tyres – a big bonus for traction if we get a spell of cold weather. It also gets a traction system, which brakes the spinning wheels and directs torque to those with better grip.

But while the Panda is nice enough to care about what you’re chucking in, the Duster isn’t.

There’s also the appeal of warranties to consider. You can add a seven-year/100,000-mile warranty to the Duster for £850, which is a proposition not to be sniffed at.

Both are pretty loveable – the Duster for its ugliness and the Panda for its cuteness.

But which, if any, to buy? You can’t beat the Duster on price, even when compared to most farm buggies, so if it’s a farm runabout you’re after then it’s a bit of a no-brainer. There’s a £2,500 price difference even if you go for the cheaper petrol-powered Panda.

But if you’re going to be doing a few road miles as well then opt for the Panda – small, smart and comfortable.