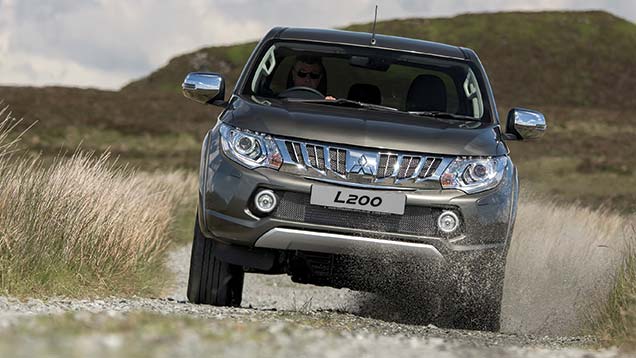 Six months ago Mitsubishi revealed the first pictures of a fresh-faced L200 that was to build on the company’s almost unrivalled heritage in the world of automotive off-roaders, and now it has arrived on UK shores.

The Japanese firm’s pickup family tree can be traced right back to the single body, two-wheel driver of 1978, and since then the L200’s stock has grown immensely.

See also: How to import a farm pickup from abroad

The company was selling more than 12,000 pickups each year and those glory days even saw it elbow out the iconic Toyota Hilux.

But the 2008 crash hit Mitsubishi hard. The value of the yen made its cars almost impossibly expensive, and allowed Ford, Nissan and the like to tame its startling sales figures.

Unlike the depressing state of tractor sales, things in the pickup world are pretty cheery.

Mitsubishi sold almost 6,500 pickups in 2014, up almost 1,000 units on the previous year, even though its existing model is beginning to look a little long in the tooth.

The previous series was a fans’ favourite, so Mitsubishi was never expected to rip up the copybook.

However, subtle changes have made a big difference to the outside and extra lines coursing through the tinwork toughen up the gangly look of the oldie.

Though there is still more chrome than 50 Cent’s jewellery drawer, it is less “in your face”, particularly once it has had a decent dusting of dirt over the outside.

On the inside, some of the cheap decals have gone, but the quality of the plastics is still second rate compared with your average SUV.

The heated seat switches have more than a whiff of the 1990s about them, but are perfectly fine for farm work.

It is new, and it is not just any old engine. It is built out of aluminium, which makes it 30kg lighter than the one that came before it.

On paper it looks like an economical operator as well.

Consumption is quoted as 42.8mpg, which is miles better than anything else on the market – though realistically that figure is likely to be closer to 35mpg.

Power and torque have also both been improved, as have emissions.

Unless you are a fully certified tree-hugger the latter is not particularly important right now, but there is speculation that emissions-based taxation will come into play in the next few years.

It has been a long time coming, but Mitsubishi is finally able to offer buyers of its manual gearbox a sixth cog.

The throw of the gearstick has been shortened, which takes away some of that agricultural feel and, although the low gears are still notchy, things get smoother as you pedal faster.

Unfortunately for those that prefer an automatic there are still only five speeds on the table – though you can negotiate them using flappy paddles if you are that way inclined.

It has also got a quite reasonable turn of pace.

Sports-day stats suggest the 0-62mph sprint can be done in 10.4 seconds – two seconds quicker than the oldie – and it will stumble all the way up to 111mph with a full helping of right boot.

Is it still good off-road?

Our off-road course was a little on the tame side, but all the ingredients for success are still there.

For one, it is the lightest pickup on the market, which has obvious benefits when it comes to negotiating the sticky stuff.

It is also one of the only pickups that can be used in 4×4 mode on the road.

Inside the cab, the two- and four-wheel drive are now locked-in through a dial rather than a stick, but the principals remain the same.

They can be switched on the move, but you will have to put the anchors on before engaging the low box.

The torque is now biased 60:40 to the rear wheels, which seems to improve handling over the old 50:50 arrangement.

The L200 has always struggled to translate its off-roading skills to the tarmac. Slamming on the squidgy brakes of the old model was like a sprinting Great Dane sliding to an unceremonious halt on a tiled kitchen floor, while the long steering gearing meant it was hard work to ever appreciate the decent turning circle.

Both have been improved, as has the L200s sometimes-savage body roll.

That has come about by stiffening the front springs and adding extra damping to support the extended leaf cushions at the back.

Though it is not perfect, it is a vast improvement and it should make the ride more forgiving with a full load in the back.

There is still a throaty roar on the journey up to top speed, but it kind of suits the L200’s workaday personality, so is completely forgivable.

Ford, Toyota and Nissan are just a few of the manufacturers launching new pickups over the next 12 month, but Mitsubishi has set the bar high.

Off-road it seems as good as ever and travelling on the tarmac has improved drastically, so the company is getting ever closer to the perfect pickup recipe.

The only let down is the towing capacity, which is 400kg shy of the big boys.

Prices seem pretty reasonable too, with the most basic 4Life version starting at £19,749.

Available initially as a single-cab with two-wheel drive, four-wheel power came to the party in 1982.

One of the first pickups to be built in Thailand, it had a modest-sounding 85hp and 2,200kg towing capacity.

Since its launch it has outsold every other pickup on the market. Mitsubishi will continue to sell the Series 4 for another 12 months alongside the new model.