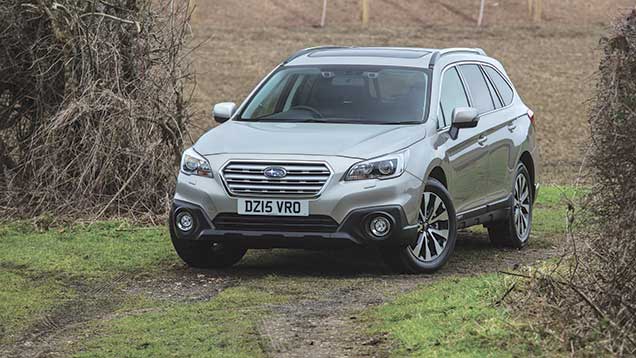 The Outback has carved a reputation as the tough kid of the estate world, but Subaru has finally decided to give its automotive hard nut a brain to match the brawn. Oliver Mark gets to grips with the gizmos.

There’s something innately loveable about Subaru estate cars. Their Japanese genetics might be aesthetically unremarkable, but you just can’t beat the I-wear-everything-with-wellies kind of look.

And while its posh German and Swedish rivals are left to fight it out for the beauty pageant, Subaru counterpunches them both with price. It’s cheaper than Volvo, VW and Audi and has traditionally come with a pretty generous spec, too.

So here we are with the Outback – the leader of the Subaru pack that, this year, celebrates its 20th birthday.

Let’s start with the clever stuff. It probably comes as a bit of a surprise to most people, not least Subaru owners themselves, that there is some clever gear disguised by that uncompromisingly angular shell.

Take the Eyesight system, for instance. It’s a sophisticated cruise control that can follow the car in front like a bulling cow, while two cameras at the top of the windscreen act as lookouts for any upcoming obstacles.

The cameras can recognise brake lights to make the speeding up and slowing down that bit smoother, while buttons on the steering wheel adjust the distance between your car and the one in front. It’s worth noting that the system is only available on the petrol CVT, though.

Is it still a boxer engine?

Yep, there’s a 2.0-litre turbodiesel or thirstier 2.5-litre petrol. We’re told the split will be about 60:40, which is surprisingly close.

Both blocks are trademark Subaru and their pancake-flat shape provides a lower centre of gravity to improve handling.

We only had a brief chance to drive the diesel version, which seemed brimming with torque but slightly shouty compared with the petrol.

The latter is a fine example of how civilised car journeys can be, despite being mated to an unorthodox stepless transmission. A jab of the throttle encourages lots of noise, though the quick initial take-up of power can leave for a slightly jerky start.

However, push the throttle down beyond half way and the silky smooth CVT switches to move through seven artificially engineered steps, which help breach that smeary acceleration so it feels just like a standard automatic. You can also take control of the steps manually through the paddles.

Does anyone want a CVT?

We might not be mad keen on them in the UK, but belt- and chain-driven transmissions are popular elsewhere, particularly across the pond.

In fairness, Subaru’s is actually the best version we’ve tried but it still feels a little peculiar in a car. That combination of hard revs and less-than-expected forward motion is all a little unsatisfactory, but if you still love a manual then don’t panic – you can have one paired with the diesel.

The latest version has had its suspension and dampers stiffened. It means it won’t sway down the road like a Glaswegian after a session in the Dog and Duck and takes corners much better than it used to.

It’s still got a way to go to match the Audi, but then the same could be said of the Allroad when it comes to off-roading. The Outback’s big, squidgy tyres are all about comfort and give those wearing impractical, low-profile footwear the two-fingered salute.

Ground clearance remains 200mm, but the cars no longer come with full-on winter tyres as standard – you’ll have to negotiate that with the dealer.

It’s still a bit crude on the inside, right?

Actually, wrong. It’s almost too good to be a Subaru Outback. The main change is the infotainment system, which is now a 7in touchscreen with things like sat-nav and a rear-view camera as standard on all models.

The seats are also comfortable and offer good support and it’s also bigger inside than before. The result is 42mm more shoulder room and it beats rivals for carrying capacity as well.

Should you buy one?

There aren’t many reasons not to. It’s smoother, quieter and more comfortable than it’s ever been, but keeps those no-nonsense, girl-next-door looks. Subaru sells far fewer cars than any of its rivals so, if you’re like me and love an underdog, that’s an appeal if nothing else.