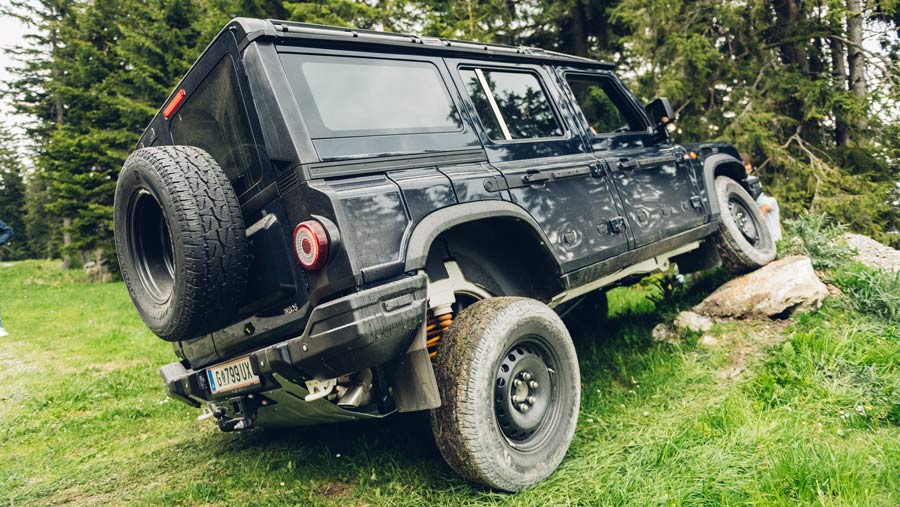 Pint-fuelled pub chats are the source of many wildly ambitious business ideas, but few can claim to be as efficiently executed as that of the Grenadier 4×4.

Ineos Automotive, a side-shoot of the multinational chemicals behemoth owned by billionaire Sir Jim Ratcliffe, has produced a production-ready vehicle from a beer mat sketch in just four years.

Designed as a replacement for the old Land Rover Defender, it enters a market of dwindling participants as the established names withdraw their rugged 4x4s and refocus on the money-spinning SUV sector. 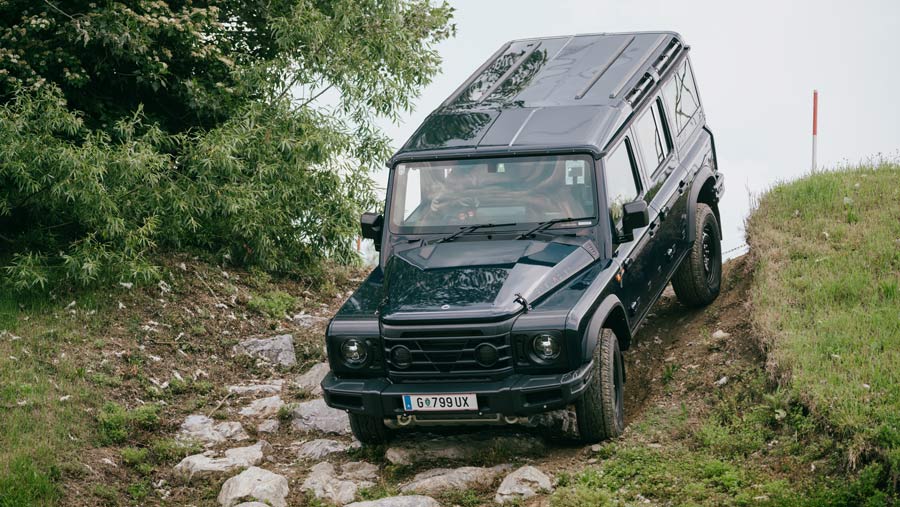 But the company believes there remains strong appetites in agriculture and adventure circles for a workhorse in its purest form – in this case, a simple, solid Station Wagon named after the boozer in which it was born.

With that in mind, Ineos has gone old-school with the recipe: a steel ladder chassis, solid beam axles and coil springs, all buried under an upright, angular shell.

Chuck in BMW’s 3-litre straight-six and a 3.5t towing capacity, and there’s no denying it hits the farming fraternity’s automotive sweet spot.

Though we didn’t get to drive it, the Grenadier will certainly be more refined than the slow and arse-achingly uncomfortable, albeit eminently loveable, old Defender.

But it still majors on the bare necessities – keeping passengers warm and dry – and Ineos is more than happy to leave the frills and fripperies to Land Rover’s modern fleet of SUVs.

So what you get is full-time four-wheel drive, front and rear diff locks, wipe-down upholstery, splash-proof switchgear and rubber floor mats, under which are drainage plugs for footwell washouts.

But you can forget about electric seats (and the dozens of motors and processor required to work them), a powered tailgate and keyless entry.

In fact, drivers even have to slot the key into an ignition barrel to start it; terribly old-fashioned, but perfectly effective. 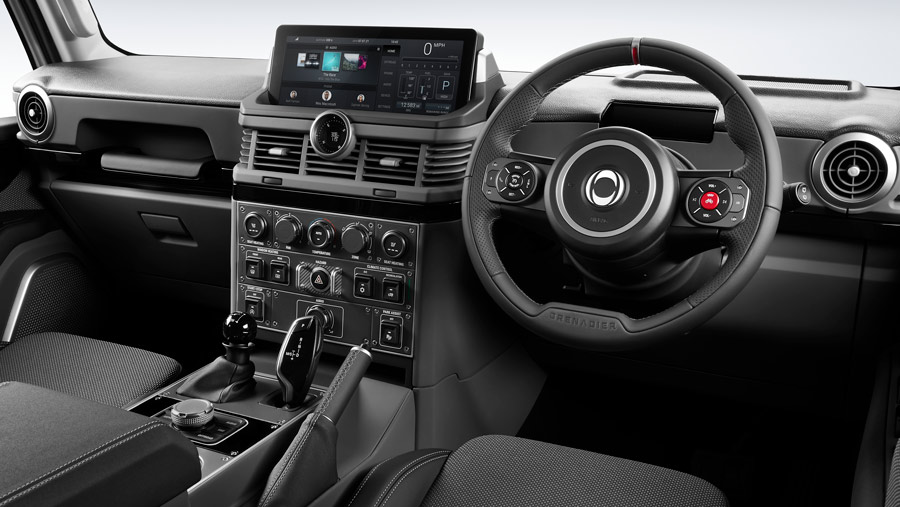 All this simplification means the Grenadier is armed with less than half the number of ECUs compared with of its rivals.

However, any suggestion that it’s some sort of Lada Niva-grade newcomer is a fallacy. The spec sheet is far from barren; the engineers have simply been picky about where they spend cash and add complexity – electric windows, central locking and rear parking sensors, for example, are mod-cons the modern motorist cannot do without.

The no-nonsense theme continues with chunky buttons, toggles and dials spaced out across a broad central console and in the roof lining between the two front seats.

In theory, this kind of back-to-basics design doesn’t grow old quite like piano-black gloss and chrome switchgear. 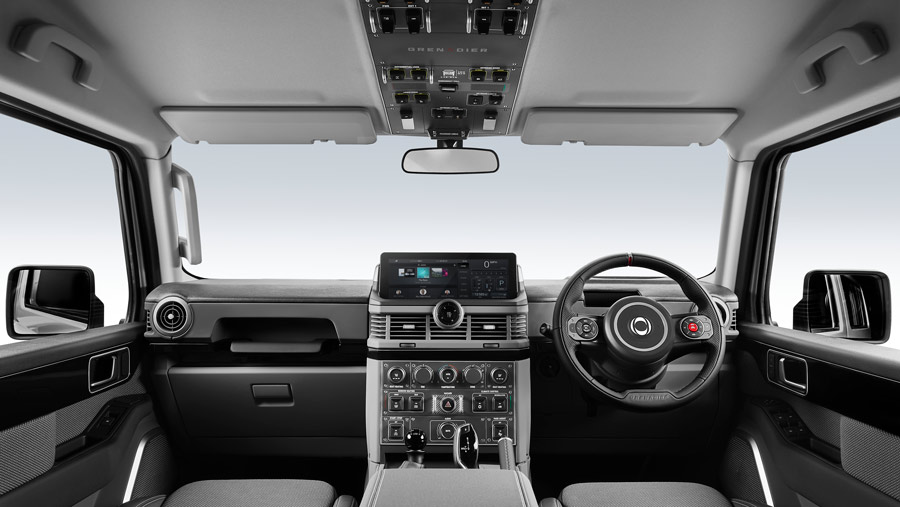 Even the one obvious indulgence – a central 12.3in touchscreen – is pared back. It’s big but relatively basic, providing the driver with vehicle readouts in the absence of an orthodox dashboard behind the steering wheel.

It doesn’t have a built-in satnav, so owners will have to use Apple Car Play or Android Auto via their smartphone – no bad thing. 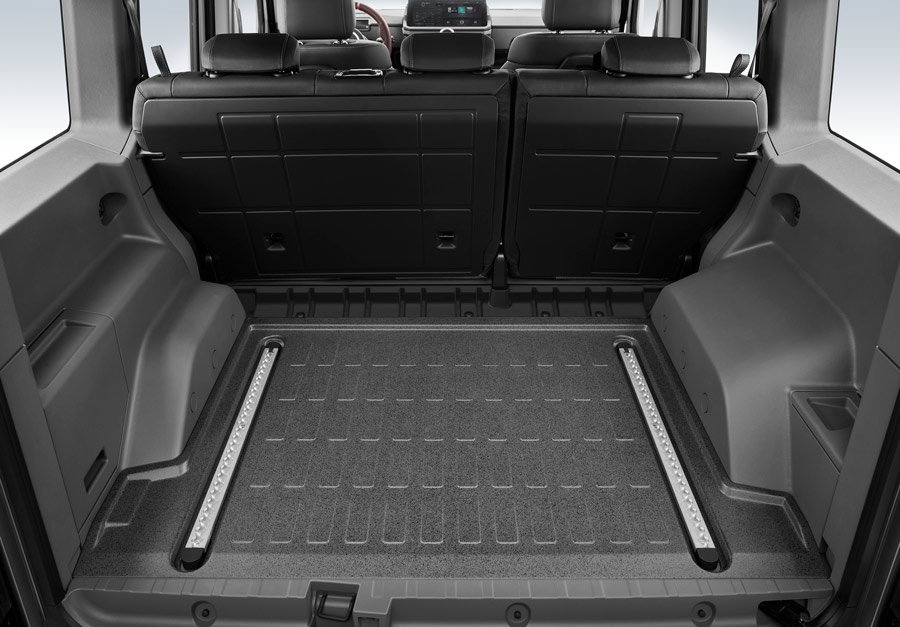 The Grenadier is dressed-down and honest, leaving door hinges on display and lights, fenders and handles pitted with exposed Torx heads.

Up front, an oversized black bumper provides protection from boisterous bullocks and, at a push, emergency bench seating for in-field meetings; multipurpose this car certainly is.

Above that, a central slatted grille carries a second set of round headlamps for off-roading and flat-topped wings flank the clamshell bonnet. The windscreen is steep, flat and abrupt – distinctly Defender-like.

Plastic wheel arches should reduce the rust risk and guard the metalwork from mud flung by the 17in or 18in steel wheels which, for many, will be wrapped in All-Terrain rubber. Alloys are an option.

Adventurer types can use the “utility belt” that stretches along the Grenadier’s flanks to hook on handy knickknacks – fuel tanks, storage boxes, camping lights and so on. And integrated rails either side of the roof provide lash-down points without having to fit a roof rack.

At the back, an asymmetrical pair of rear doors open wide enough to swallow what is likely to amount to a 1t payload, although there are still a few more calculations to be done before that is confirmed.

Useful features include pairs of easily accessible towing lugs front and rear, underbelly protection (which can be upgraded to a thicker gauge) and a lockable storage box inside the spare wheel.

The Grenadier is sure to drum up early excitement by offering BMW’s 3-litre straight-six, which can be had in either petrol (281hp, 450Nm) or diesel (245hp, 550Nm) guise.

Though the emissions police have driven 3-litre-powered 4x4s close to extinction, Ineos gets a bit more wiggle room because it is classified as a small manufacturer. However, this works both ways and the company will have to limit how many vehicles it sells in Europe to avoid any penalties.

The ZF gearbox – eight speeds, automatic – is paired with a transfer box that provides a range of crawler gears. And for extreme terrain, the front, central and rear differentials can be locked.

The rest of the undercarriage is pretty agricultural. Ineos decided to source its solid beam axles from tractor specialist Carraro, and they are combined with a rufty-tufty box-section ladder chassis and coil-sprung suspension.

Similar set-ups can be found in the Toyota Land Cruiser and Mitsubishi Shogun – two supremely capable 4x4s that, because of a shrinking UK market, now spend more time dune-bashing in the desert. 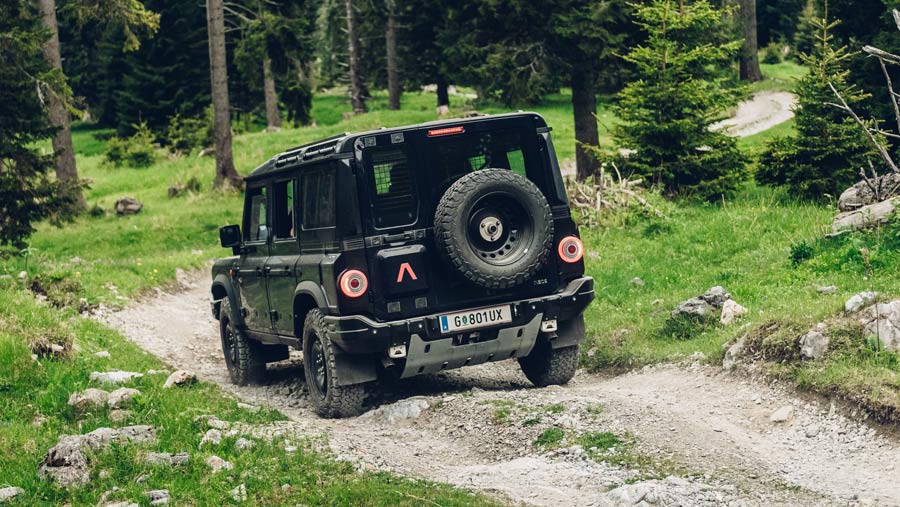 The Station Wagon is all but finished, with order books opening in October and deliveries expected to start in July next year. That’s seven months behind schedule because of the “long Covid” that continues to hamper car production.

Definitive pricing is not available, but the two-seat commercial derivative will cost roughly £45,000 (including VAT) and the five-seater is expected to be around £50,000.

That puts it at the apex of the pickup market because “durability isn’t cheap”, but it qualifies as a commercial vehicle, so VAT-registered buyers will pay a good deal less.

Production will take place at the former Mercedes-Benz-owned Smart factory in Hambach, north-east France, where Ineos is continuing to build the diddy two-seaters on a contract basis.

Plans are also afoot to expand the range, with a double-cab pickup top of the agenda. That is likely to be followed by a chassis cab (a pickup minus the load bed) and, quite possibly, a short wheelbase version of the Station Wagon.

And with combustion engines in the firing line, Ineos is working on hydrogen fuel cell propulsion in a partnership with Hyundai.

The company already produces 300,000t of hydrogen per year – enough to fuel 1.2m cars – but a significant investment in distribution infrastructure will be required to keep thousands of cars running across the world.