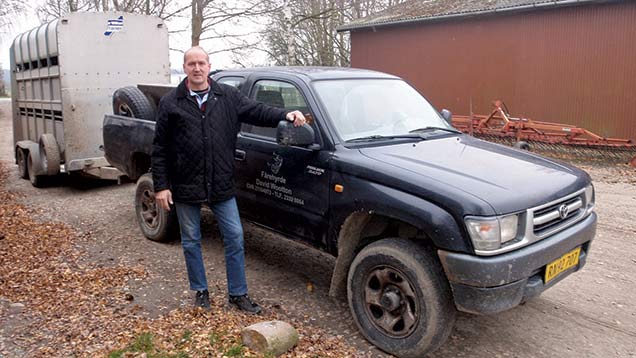 A shepherd from Denmark is getting his money’s worth out of a Toyota Hilux pickup that’s clocked up more than 387,000 miles on its original engine and gearbox.

Ex-pat David Wootton bought his 2.4 TD Hilux in 2001 and has been running it flat out for the past 13 years. During that time it’s gone through three starter motors, two alternators, two water pumps, four sets of rear springs, three wheel bearings and a clutch.

But other than a regular service and an injector clean, the engine has had very little attention, says Mr Wootton. “Throughout its life I’ve changed the engine oil and filter every 10,000km and a given it a full service every time the MOT is due, which is every two years in Denmark,” he says.

“I’m still averaging 10km/litre (about 28mpg), but it is starting to smoke a bit if I put my foot down with a heavy load of sheep on the back.”

David Wootton moved to Denmark in 1992 after taking a job as head shepherd on the Krenerup Estate, which is a one-and-half hour drive south of Copenhagen.

He’s now self-employed and runs his own 800-head Texel-cross flock over the same estate land. He crosses his Texels with the Swedish Gotlander breed to increase lamb yield.

Denmark is littered with small sheep farms, but there are only about 20 flocks in the country with more than 500 ewes, says Mr Wootton.

Despite its life of hard farm work, the truck hasn’t really let him down. “Once a water pump blew and I needed a lift to the garage and another time a wheel steering joint broke, but considering what it has been through it has been fantastic.”

Bodywork – a perennial problem for ageing Toyota pickups – is also sound and the only rot so far has been a bit of bubbling on the rear arch and the bar on the back that the towing hitch attaches to.

It also sustained quite a bit of damage three years ago when a telehandler drove into it. This racked up a £3,500 repair bill, but surprisingly the insurance company paid up, he says.

Since then it’s been busy ferrying his 800 Texel cross ewes around southern Denmark. It has also spent a fair chunk of its time putting out and picking up Ridley Rappa fencing using a converted trailer. “Last year I reeled out and picked up more than 50 miles of the stuff.”

From December to February the Hilux also racks up the miles while Mr Wootton makes his way round the country shearing about 4,000 ewes. “This doesn’t sound that impressive, but in a country where the average flock size is about 14, it takes many days.”

Mr Wootton’s only complaint with the HiLux is that its 2.4 TD engine could do with a bit more grunt with a heavy load in tow. “It’s only rated to tow just over 2.2t, whereas newer trucks can manage as much as 3.5t,” he says. “If I upgraded I could get a bigger trailer and do fewer trips. It would be nice to have heated seats, too.”

Despite the massive mileage, Mr Wootton has recently been offered £1,500 for the truck. That puts the cost to him at a very reasonable 4.3p/mile.

If you’ve got a high-mileage 4×4 that’s given you sterling service and is still on its original engine, we’d like to hear from you. A target of 387,000 is no doubt tough to beat, so we’d be interested to hear about vehicles with 250,000 miles or more on the clock. If you’d like to be featured email a few details to fwmachinery@rbi.co.uk.