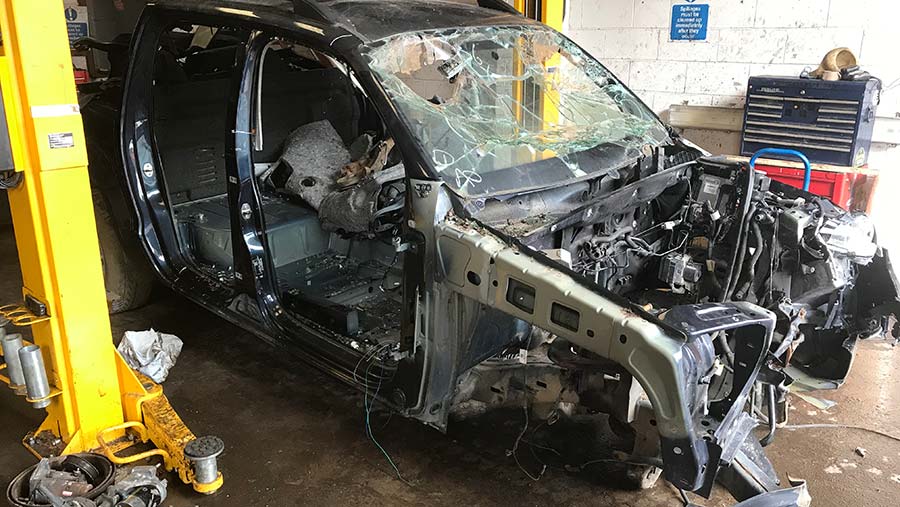 Farm pickups are subject to a notoriously rough and loveless life, but patching them up with second-hand spares can push them a few years beyond their sell-by date without costing the earth.

There are several specialist 4×4 breakers dotted around the country (though predominantly in northern England), including MJM in Hull, A1 in Heywood, Lancashire, and CWS in Glastonbury, Somerset.

While these can all offer a pretty good range of parts for everything from Suzuki Jimnys to BMW X5s, Thornton 4×4 Breakers based in Halifax, West Yorkshire, specialises in pulling apart single- and double-cab pickups built from 2000 onwards.

It has close to 1,000 pickups and Land Rover Defenders in various states of undress, all stacked three-high across huge lengths of cantilever racking, along with thousands of other spares stored on shelves. 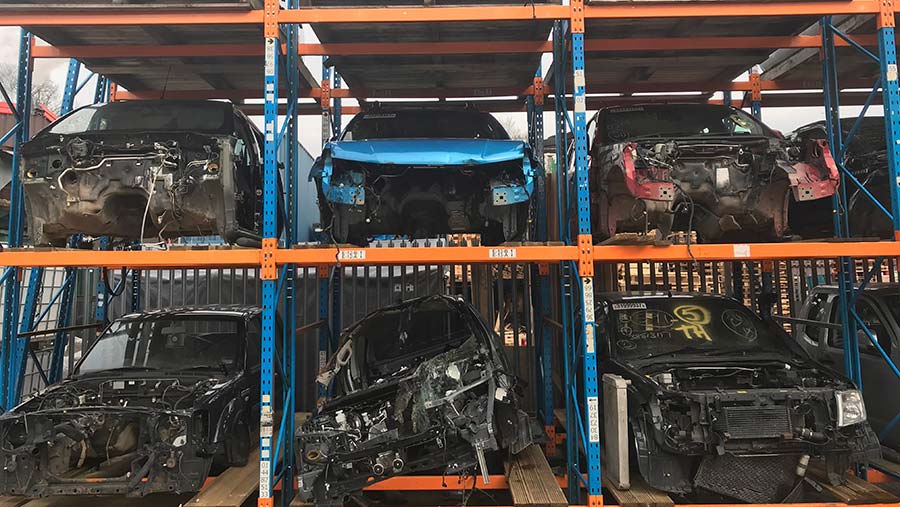 Having celebrated 30 years in the breaking trade last year, owner Peter Jones knows a thing or two about squeezing every last penny from a crumpled motor.

Everything that is dragged into Thornton’s yard has been written off by insurance companies as a category B-graded vehicle, so can be stripped of its working parts but not restored and returned to the road (see “Insurance write-offs – what you need to know”).

Once written off, the vehicles are sent to auctions, where buyers from all over the world scrap it out for the best bargains.

UK firms have the advantage of lower transport costs that eat into potential profit, but many of the foreign bidders are based in countries where cat B write-offs aren’t recognised, so they can get the trucks patched up on the cheap (rather than breaking them) and sell them in “roadworthy” condition for a healthy margin.

Up to 20 motors arrive at Thornton’s 2.5ha site each week, 90% of which have a decent engine and gearbox that is removed and put into storage.

Non-runners are stripped for the good bits – the core block, injectors, turbos and fuel pumps – that can be used on reconditioned engines or sold as spares. 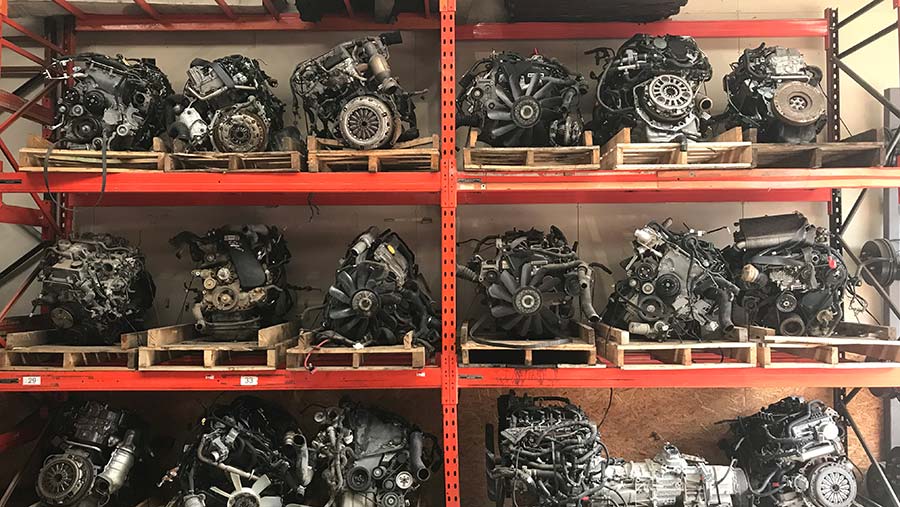 With the engine and gearbox checked, cabs are removed, chassis stripped and wheel/tyres salvaged, though it usually takes a couple of vehicles to assemble a sellable set.

In all, very little goes to waste, aside from beaten-up body panels and smashed windows.

The company uses a clever computer management system to keep tabs on the millions of individual parts stored on site.

Once the chassis number is typed in, it populates a full list of parts fitted to each vehicle, as well as automatically loading them straight onto eBay.

It means the team knows exactly what is on the shelves at any one time and helps track whether there is an excess of any particular items that might influence pricing in the future.

As well as selling parts to the UK, the company regularly packs up 40ft containers destined for the tropical shores of Trinidad and Tobago, Greece and Dubai.

This tends to be the pre-2005 stuff, with newer parts reserved for the UK market.

There are plenty of incentives to buy second-hand parts, with price and lead time the two most convincing factors.

Take a popular farm truck such as Isuzu’s D-Max, for instance. The 2.5-litre engine it ran until last year can cost more than £6,000 to replace new and has a lead time of about three months, which isn’t particularly handy for a vehicle relied upon daily.

Added to that, the price is for a short motor (head and block), so you will still have the arduous task of stripping the old engine and fitting all the ancillary parts.

However, a second-hander could be sourced for £2,500 and fitted a few days later. Throw another £400 at it and Thornton’s will collect your vehicle and fit the engine, too. 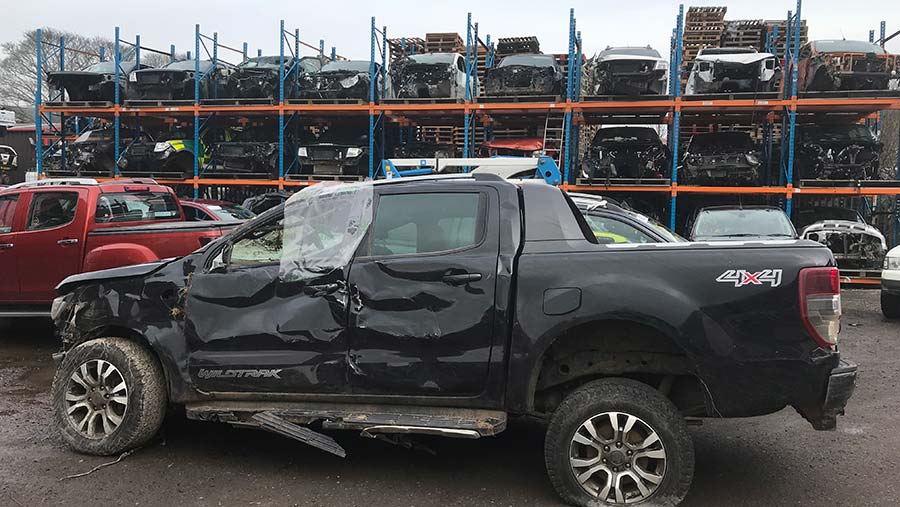 Though the D-Max block is a good example, it also happens to be at the higher end of the price list because it’s so popular.

Comparatively, Land Rover Defender spares are now astronomically expensive. Car values are soaring, which means they are very rarely written off and the supply of parts has all but vanished.

Car insurance write-off categories – what you need to know

The Association of British Insurers (ABI) updated its industry code of practice – known as the salvage code – on 1 October 2017 to take into account the increasing complexity of new vehicles, which makes it harder for damaged cars to be safely repaired.

In general, a write-off includes any vehicle deemed to have sustained enough damage to be unsafe on the road, or one that is still safe to drive, but uneconomical to repair.

The latter is based on a repair-to-value ratio that varies between insurers and is calculated by taking into account the vehicle’s condition and the collision damage it has sustained.

There are still four write-off categories that are graded in severity from pure scrap to repairable cosmetic damage.

Previously, this ranged from A to D. The last two of those (C and D) were governed by the insurance company’s estimated cost of repair, which has risen significantly because cars are so complicated.

This means they are more frequently being deemed write-offs, despite being perfectly safe and usable.

However, while A and B grades remain proper write-offs that are not suitable for repair, C and D have been replaced by two new categories – S and N.

These are designed to shift the focus from the cost of repair to the actual problem, highlighting any structural damage that must be properly dealt with if the vehicle is to remain on the road.

Here’s a quick guide to the different classifications:

A – Scrap only. These have to be crushed and salvageable parts must be destroyed. Fire damage is a good example.

B – Break. Seriously damaged, but parts are salvageable. These should never re-appear on the road, but reclaimed parts can be used in other road-going vehicles.

S – Structurally damaged but repairable. These have suffered damage such as a bent or twisted chassis, so the damage is more than cosmetic and needs to be professionally repaired – it won’t be safe to drive until then.

N – Non-structurally damaged and repairable. These are likely to have cosmetic or electrical damage that makes the vehicle uneconomical to repair, but both S- and N-grade vehicles can be sold on back to the original owner or a third party.