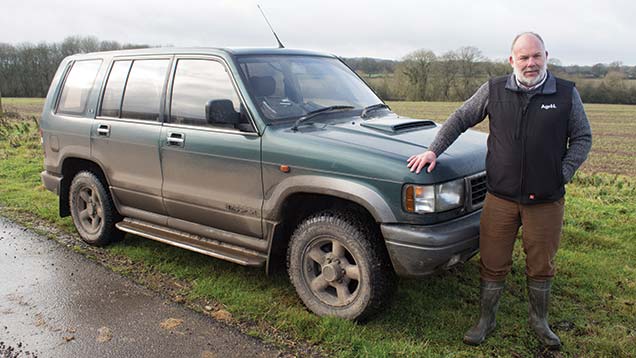 Many people start twitching when their car pushes past 60,0000 miles, but a Hampshire agronomist has managed to eke 490,000 miles from his Isuzu Trooper without batting an eyelid.

Andy Gay first got hold of the 1997 truck when it was 18 months old and had just 27,000 miles on the clock. At the time it was a company lease car, but he liked it so much that when the lease expired in 2001 he bought it outright.

Since then it has been his daily driver, ferrying him between the Isle of Wight, Hampshire, Wiltshire and Surrey while carrying out his crop walking duties. It’s only ever let him down once when the alternator drive belt snapped, but his local garage had him up and running again in just 20 minutes.

The remarkable truck is still on its original engine and gearbox and only had its first replacement clutch last year. Considering it had held up for 438,000 miles, it hadn’t done too badly.

Considering the mileage, other replacement parts have been few and far between. The biggest inconvenience was a worn-out rear axle, but after a bit of searching Mr Gay’s local garage picked up a salvaged part for £300. It also had a new seal kit for the injector pump.

One of the secrets to the car’s longevity is the fact it has been meticulously maintained by Mr Gay’s local garage, North Motor Company. It has given the truck an oil change every 6,000 miles, fitted about six cam belts as well as slotting in a few sets of brake pads.

Remarkably, it’s only on its second set of discs, though, and has only had a couple of exhaust systems.

The bodywork is also incredibly tidy, with almost no rust or major repairs. The only cosmetic work it has had was to touch up some bubbling paint chips just above the windscreen.

Surprisingly the chassis is also rot-free and it has only just started to develop some surface rust. This wouldn’t be that impressive for a regularly washed and pampered truck, but according to Mr Gay it gets very little TLC. “It spends most of its days bumping up farm tracks and getting covered in mud,” he says.

“It also used to get regular doses of salty sea spray when I took the open ferry to the Isle of Wight.”

In a bid to find a replacement for the truck when it eventually gives up the ghost, Mr Gay invested in one of the last 3-litre Isuzu Troopers. This now acts as back-up for the old one, but in two years of ownership it has thrown up more problems than the original did in 17 years.

Despite the old-school engine set-up the original Trooper returns reasonably good fuel economy, he says. “During mixed driving I tend to get about 28mpg out of it, but if I’m on a long, steady run it’ll just about get to 31mpg.

For a brief spell Mr Gay ran the Trooper on biodiesel produced on the Isle of Wight, but after the government removed the 20p tax benefit, the producer had to shut down. “It’s a shame as it seemed to run much smoother on the biodiesel and it didn’t really affect the fuel consumption.

If you’ve got a high-mileage farm truck on its original engine and gearbox we’d like to hear from you. Email James Andrews including your contact details and a bit of information about the truck.