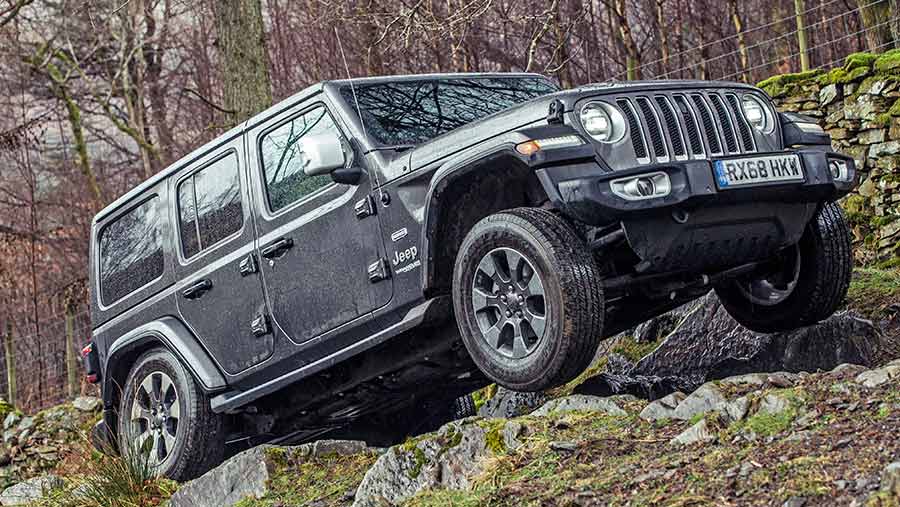 Despite selling fewer than 300 models to its small and devoted band of followers last year, Jeep has decided to invest healthily in a new Wrangler model that brings with it the same off-road ability in a more frugal and high-tech package.

Jeep’s moneymen will no doubt have been buoyed by the Land Rover Defender’s continued exile from the 4×4 market, giving them a chance to tempt a few more hipsters and hardcore off-roaders to the virtues of the one-of-a-kind Wrangler.

Sadly for petrolheads, the 3.6-litre V6 petrol has disappeared from the menu, replaced with a turbocharged 2-litre unit that promises to deliver equal combustive vitality. The stats suggest it’s a mere 12hp shy on the power front and max torque has actually risen to 400Nm.

The old 2.8-litre MultiJet diesel has also wound up in the scrap heap, deemed too uneconomical compared with a new 2.2-litre lump offering the same 200hp and only 10Nm less torque.

Things have changed in the transmission department too, with buyers getting the option of a seven- or eight-speed auto transmission – both of which promise considerably smoother acceleration and more frugal fuel use than the antiquated five-speeder in the previous model.

Squeezing these modern transmissions into the Wrangler’s compact frame has robbed a little left-leg space from the driver, though. This means you have to tuck your foot awkwardly under the brake pedal or pull it up close to the seat.

Though our thoughts about external changes were limited to a Post-It note, the inside of the Wrangler is almost unrecognisable from the outgoing model.

The basic, rugged feel has all but disappeared, replaced with a rather neat interior ensemble that includes a central 8.4in screen on the upright dash containing DAB radio, sat-nav and Apple Car Play.

And with no V6 thrum to keep ears occupied, passengers will have to do with an Alpine speaker pack. As with previous models, the doors, roof and windscreen can be removed and there’s also the option of a sliding roof. 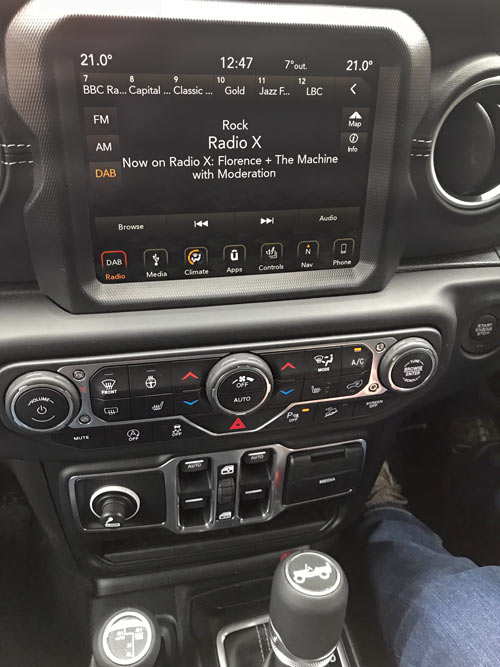 There are two four-wheel drive systems available depending on spec. Command-Trac comes on Sahara and Overland models and is a standard low-range box.

A 36deg approach angle blows most of the pickup market away, while a 20.8deg departure is about average.

Wading depth is an impressive 760mm and it can tow 2,495kg – not quite on a par with the big-ticket pickups, but by no means embarrassing.

However, seeing down to the front corners of the Wrangler is still tricky – so much so that tight off-road sections of our test course required a daring passenger to hang out the window to act as navigator.

We found the steering a little lightweight and unresponsive, too.

And given the extreme suspension travel, it was no surprise to experience wallowy handling through the corners. Cheeringly, the straight-line ride is much better.

The new Wrangler still has bags of character and the sort of welly-wearing off-road pedigree that will put any brand-new motor on today’s market in its place.

Interior upgrades have bought the dated warhorse into the 21st century but, sadly, the price has also climbed. Starting at near £45,000 puts it in Discovery Sport territory and sales may also be hit when the new Land Rover Defender comes along later this year.