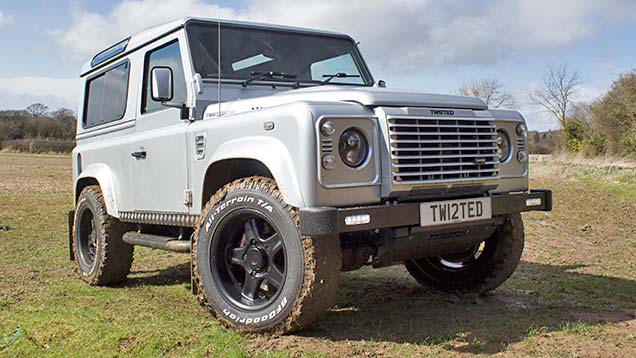 Love Land Rover’s Defender, but long for a bit more luxury? James Andrews has the answer – if you can afford it

While Land Rover has been quietly neglecting its rugged Defender off-roader, an engineering firm from Yorkshire has been busy lavishing it with luxury equipment.

Twisted operates from a fairly run-of-the-mill Thirsk industrial estate, but the Land Rover Defender models coming out of its workshops are anything but average.

Take the T80, for example, the firm’s flagship Defender. This has an uprated 180hp engine under the bonnet, better brakes, suspension and turning circle, soundproofed leather interior and a music system to rival the O2 Arena.

Other upgrades include heated leather seats that slide back further and a smaller steering wheel with neater boss to give the driver a bit more space.

The price for all this off-roading perfection is far from cheap – about £80,000 – but it reflects the amount of work that goes into making one, says Twisted owner Charles Fawcett.

“It takes about 450 man hours to put one of our T80 Defenders together and the end result is about as good as a Defender can be.”

Happily, Twisted Defenders are still classed as a commercial vehicle, so buyers can claim the VAT back to make the price a bit more palatable.

The process starts with a top-of-the range Defender XS model. Twisted then strip it down inside and out before taping up leaky joints in the bodywork and giving the chassis a liberal dose of Schutz underseal.

Interior and exterior panels are then realigned to help keep it watertight and cut down wind noise. The whole interior is also soundproofed before being fitted with thick, hard-wearing carpets to help stop the usual Defender clanging and banging. To finish things off, the dash, centre console and Recaro seats are wrapped in leather and a top-end Bluetooth sound system is fitted.

To many people, it’ll seem a bit ridiculous turning Land Rover’s only remaining utility vehicle into a luxury off-roader, but Mr Fawcett says that’s not the point.

“The last thing we’re trying to do is turn the Defender into a Range Rover,” he says.

“Our Land Rovers are still practical off-roaders that you can happily shove your dog in the back of – we just improve them so that they’re quicker, more refined and you can happily drive them long distances on the road.

Looking at the spec and price tag of Twisted’s top-end products, it would be fair to assume that few would make it in to agriculture.

But farmers are one of the firm’s biggest customers. “We’ve sold a few of the top-end models to farmers, but they usually go for one of the lower-end models that have slightly less work done inside.”

Twisted also does a lot of upgrades and improvements to existing vehicles, which is a particularly popular service with farmers.

One of the most common jobs for farm vehicles is remapping the engine and adding a larger turbo to help extract a bit more power for towing.

Charles Fawcett grew up driving Land Rovers and started upgrading them while working at his family’s off-road driving centre near Northallerton.

He started off by tuning engines to develop more power, but quickly branched out into other modifications.

Since then the business has gone from strength to strength selling as many as 50 new custom vehicles a year as well as countless conversions and modifications.

But when a truck comes in for work, most customers will go for a few other improvements, too.

That often includes uprating the suspension to improve road manners, as well as adding wheels with a larger offset and adjusting the steering rack to tighten up the turning circle. Soundproofing is another popular one.

End of the line

With Defender production due to wind up in December, Twisted has had to think carefully about how it’s going to keep building its vehicles.

At the moment the firm is making about 50 new Twisted Defenders a year, so to keep him going, Mr Fawcett has ordered 240 new vehicles, which will all be delivered by December.

“At our current rate of growth, that should keep us going for about three years – the trouble is going to be finding the space to store them.”

Once these have been sold, the business will focus on converting and improving existing Defender models, as well as renovating and updating older models.

“About 75% of all the Defenders built are still on the road, so there should be plenty for us to play with.”

In the longer term, Mr Fawcett plans to develop his own Defender-esque 4×4 under the Twisted brand.

Twisted is not the only firm specialising in getting the best out of Land Rovers.

Farmer James Reid recently sent his Defender 90 for modification, which included power and suspension upgrades as well as a few aesthetic bits.

After the Bowler stage-one engine tune and new ECU, the truck now develops 170hp and 450Nm of torque. That’s improved the 0-60 time from 15sec to 8sec and has dramatically improved performance.

“I’m extremely happy with the conversion and it has given it hot-hatch performance while retaining its ground clearance and off-road ability,” says Mr Reid.