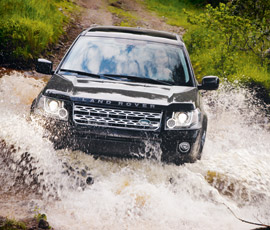 The Freelander has been happily plodding along for the last 15-or-so years and has found a lot of willing buyers. That’s until the sporty Range Rover Evoque – now Land Rover’s biggest-selling model – popped up and planted its flag slap-bang in the middle of the Freelander’s SUV territory.

In response, a scalpel was taken to the back of the Freelander’s bodywork at the end of last year. And it now gets all the fancy stuff you’d expect on Land Rover’s top-end machines inside.

Conveniently, the test Freelander arrived a couple of days before I moved house. I’ve scored it on its box-carrying abilities, but the criteria can easily be adjusted to farming situations, too.

When it came to giving my new neighbours the illusion of a well-to-do young man, the Freelander served me well. It probably helped that I had the HSE Lux spec, which was decked out in Aintree green paint and shod with 19in alloys. Front and rear Xenon LEDs provide a dusting of sportiness but, inside, the high upright driving position and abundance of glass means it still has a baby Discovery feel to it.

Boot space is pretty average so cramming in junk can be like a game of Tetris. When it comes to load lugging the Disco is still the hands-down winner from the Land Rover stable.

The Freelander’s rear seats don’t fold flat, so shoving in chunky bits of furniture can be awkward. It’s spacious, though – 3m lengths of timber slotted in without hanging out of the windows, sunroof or boot.

Two diesels are on offer in the engine department – both 2.2-litre but one churning out 150hp and the other (our one) a whopping 190hp. With that much power on tap, there was always the temptation to gun it away from traffic lights. However, the gearbox is slightly dopey at times and there’s a hint of delay between stabbing the throttle and take-off.

The Freelander’s boxy shape also means wind noise is present at high speeds. There’s a fair bit of diesel chatter on start-up and at high revs too, so you’re best sticking to the middle of the rev range if you’re after a quiet ride.

On-road handling is better than average but it’s thirstier than some of its rivals – combined consumption is quoted as 40.4mpg but we got closer to 33mpg after a week of mixed driving.

Off road, it’s surprisingly good. There’s no Discovery-style air suspension for adjusting the ride height but there are various terrain settings to adjust the response of the throttle and drive.

Flick a switch to pick grass-gravel-snow, mud and ruts, or sand mode and the Freelander’s computer will feed power to whichever wheel shouts the loudest.

The latest Freelander is more understated and better looking than the Evoque and it’s also able to cut it off-road. It comes at a price, though. Our test version nudged £40,000, so stick to the lower-spec versions if you’re shopping on a shoestring.