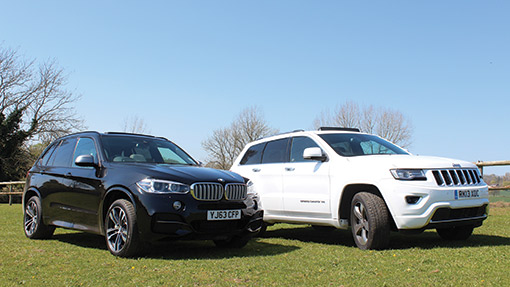 There’s oodles of choice on the 4×4 market for deep-pocketed buyers. Oliver Mark compares two big-boned candidates that should make most shortlists.

Battle-hardened Jeep has an off-road heritage harking back to the days of Just William and spam sandwiches, while 15 years building 4x4s means BMW is a comparative newcomer to the cross-country business.

However, Jeep’s knack of building solid, all-American off-roaders has yet to be properly transferred to tarmac life, where the stars-and-stripes company has traditionally fallen short of its German rivals on the quality front.

By contrast, the BMW bandwagon rolls on, with the company posting good sales in pretty much every car sector. That extends to the four-wheel drive offering, too, where the German giant’s X3 and X5 cars continue to control a decent wedge of the lucrative SUV pie.

Let’s deal first with the Jeep – an in-your-face monster that should appeal to anyone who likes rap music and chunky gold chains.

The mix of Daz-white tinwork and chintzy chrome extras on our test car was undeniably American, but it’s worth avoiding the 20in alloys if you don’t want every tiny bump in the road to be sent shivering through the steering wheel.

That aside, Jeep has generally managed what most rivals haven’t by keeping a boxy figure that gives more than a whiff of off-road prowess.

The BMW, by comparison, looks every bit the modern 4×4. Hideously expensive low-profile rubber wraps around 20in spokes and limited ground clearance means it won’t take much to get its belly dirty.

Inside the Jeep you’ll find the results of a lavish standard spec, which includes a satnav on the 8.7in touchscreen and a digital dash that can display heaps more information. But the abundance of goodies fails to disguise the lack of quality from a £50,000 car.

In too many places metal is ousted for plastic and the seats seem to have been crafted from the hide of an eczema-ridden Friesian.

Little details also highlight its inferiority to the BMW – the foot-activated handbrake means there’s nowhere to rest your left leg and it’s generally less sophisticated than the big German. 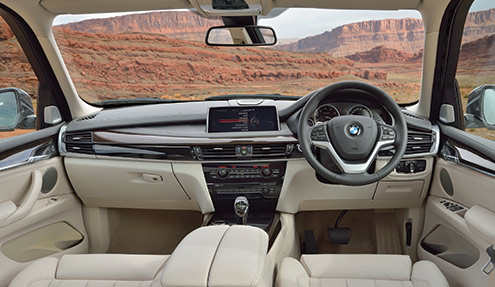 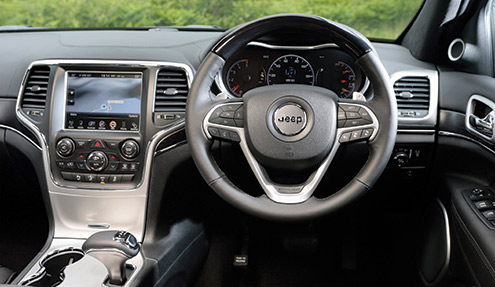 In basic form the X5 falls short on goodies, but anyone with enough cash in the bank will see the options list as irresistible as a Friday night pint.

M-sport versions can be specced with most things under the sun, including doors that latch themselves shut automatically with the satisfactory clu-clunk of a finely tuned torque wrench. BMW’s touchpad infotainment system is also one of the best on the market.

Both cars have a second row of seats with space for the legs and heads of three six-footers and the Jeep has the edge in the boot department.

Both are pretty big and spacious, although neither can quite match the practicality of the Land Rover Discovery. The Jeep carries a full-size spare wheel – a rarity in modern cars – while the BMW can be specced with seven seats. You pays yer money…

A diesel engine is the only choice for any Jeep buyer with a full set of brain cells. It comes as a Fiat-made 3.0-litre V6 which, for entry-level models, will provide a modest-sounding 188hp. The more popular choice is likely to be the no-nonsense 247hp unit.

It can be a vociferous thing both during acceleration and cruising, but wind and tyres are kept well-hushed. There’s a ludicrous-sounding 6.4-litre petrol version in the ranks, too, but it’s reserved solely for those with more money than sense.

In the BMW camp the biggest seller will be the 258hp, six-cylinder 30d. We tried out the M50d, though – a fiery character on the road thanks to a three-stage single turbo joined to the 3.0-litre six-pot, which is tuned to deliver 381hp.

There are four engines choices in total, including a powerful 4.4-litre petrol. The rest are diesel-powered, starting with the 2.0-litre, four-cylinder X5 25d with 218hp and topping out with the M50d.

Jeep made a significant, and necessary, step last year when it tied an eight-speed ZF box to the V6, replacing the old-as-the-hills five-speeder that went before it.

That bought the Americans in line with the competition, improved consumption figures and reduced the quantity of carbon dioxide it pumped out of the tailpipes.

Top speed is now a not-to-be-frowned-at 126mph and 0-62mph comes in 8.2sec. On the road the 3.0-litre can feel a little short on power but it would be boorish to expect much more from a car built like a hairy Ukrainian shot-putter.

Road-going economy reached a touch over 30mpg after a week, which is also to be expected for a car of such tremendous size and weight. So, too, is the slightly oaf-like handling, which leaves it a little way behind its German rival. It’s the price you pay, it seems, for maintaining some off-road credibility.

BMW’s eight-speeder is a more intelligent switcher. Smoothness of gear changes are second only to the moves of a Bulgarian pickpocket, although the active dampers of the M-sport make for a hard ride.

A week of mixed driving left the high-horsepowered X5 a fraction behind its American rival in consumption terms, but miles in front when it came to pace. A speed of 62mph can be reached in 5.3sec (or 6.9sec if you have the smaller, more frugal engine) and a heavy right boot can take you to 155mph.

Once upon a time every 4×4 was ranked primarily on its off-roading qualities. Nowadays, though, premium SUV point scoring is done according to interior materials and cosmopolitan colour options rather than diffs and grip.

For now at least, Jeep remains one of the few exceptions to the rule, but this model takes it another step closer to the suburban norm of school runs and shopping centre car parks.

All of the Grand Cherokee diesels get a low-ratio box, as well as a terrain response dial like the one you’d find in a Land Rover. Four-wheel drive is full-time and there’s an electronic rear diff and a clutch pack that spreads torque to the front and rear axles. Cheaper versions ride on steel springs while top-speccers get air cushions to cut out bounce and body roll.

When it comes to country roads the Cherokee can be a clumsy customer. Its size also makes it awkward to park – rear-quarter visibility is poor so the reversing camera is a must-have. At 3.5t, towing is pretty much standard in the heavyweight division.

It’s a different story for X5 – country life was forgotten in the BMW brainstorm. Like its American counterpart the BMW is short on steering feel and the slick tyres act like ice skates off-road. There are considerably fewer off-road controls than in the Jeep, too.

The Jeep will depreciate quicker than its rival and is in danger of losing its off-road skills without replacing them with on-road ones.

High residuals make the BMW a more sensible choice, but in opting for it you’re in danger of getting lost in the crowd.