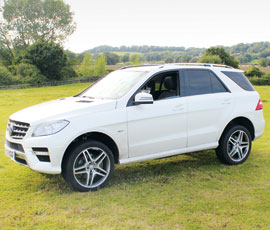 Mercedes’s flagship 4×4 is one of the most expensive on the market. But do you get what you pay for? Oliver Mark found out.

The suspicious success of British bankers and the advent of the Premier League irrevocably changed the face of four-wheel drive cars in the 1990s.

Big, square body panels and crude steel chassis made way for aluminium curves and chrome handles. The Toyota Land Cruiser and uncompromisingly angular Mitsubishi Shogun have been left as the last bastions of rudimentary 4×4 engineering.

The Mercedes ML350 – a prestige 4×4 by definition – should still get you from A to B, even along some of Britain’s bumpier roads.

Scribble a check for £71,000 and you can drive it home, live in it, or do whatever it takes for you to get your money’s worth.

But also expect to be greeted by friends at point B with rolling eyes. That’s if you opt for our test car anyway – a gluttonous combination of marshmallow white and shiny chrome.

It could look big and gruff, but with chrome jewellery in adundance and tinted drug-dealer windows it gets out-manned by VW’s Touareg and the timeless Discovery.

Looks aside, brainy Germans have made this 4×4 impressive on the road. 0-62mph comes quicker than you could read this paragraph – 7.4secs to be exact. Top speed is 139mph.

It swishes up and down the seven-speed auto transmission with ballet-like grace. You can flick paddles to switch from cog to cog if you like, but why bother?

The auto start/stop function can leave it a little sleepy at junctions, though. Let the engine switch off at a tricky ‘T’ junction and it’ll take a second or two to wake up.

We have a couple of other gripes, too. The steering wheel is too chubby and turning the wheel brings about some unexpected resistance. 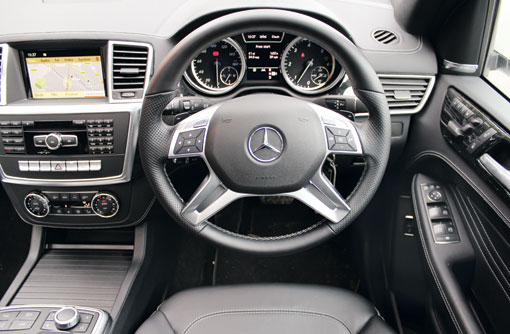 For the same price as a chic Welsh cottage, you’d expect this Mercedes to deliver a decent kit count and the sort of finish quality usually reserved for the Queen.

You won’t be disappointed – it’s like relaxing in your favourite chair. There’s a swanky leather-stitched dash and anthracite poplar veneer surrounds the controls.

We lost count of the gadgets, too – temperature controlled cup holders, a mobile phone keypad, and reversing camera to name but a few.

The camera should make it ideal for backing up to the Ifor Williams. With a 3.5t towing capacity it should be perfect for runs to the market (provided you can put up with the funny looks).

Back inside, the second row of pews will seat three people comfortably. There’s no third row, though, which leaves an enormous boot.

Given its roadster credentials, skeptics can be excused for questioning the Mercedes’s ability on mud and dirt.

But typical Mercedes cleverness should keep it going even on the roughest terrain.

You can flick, press or pull any one of the bank of buttons on the dash to keep it moving. Clever diffs will find traction on an ice rink and air suspension can be pumped up almost enough to straddle a MINI.

If those clever things don’t work, there are 258 of Germany’s finest stallions to help out.

Helped by all the wizardry of a Hogwarts dinner hall, the ML350 still manages elegance on the road and aggression off it.

The only problem is that for the same price you could buy something a little less conspicuous and still afford to pay the mortgage.

Swerving the options list will take the asking price from an unsightly £71,380 to a slightly more palatable £48,490 (inc VAT).