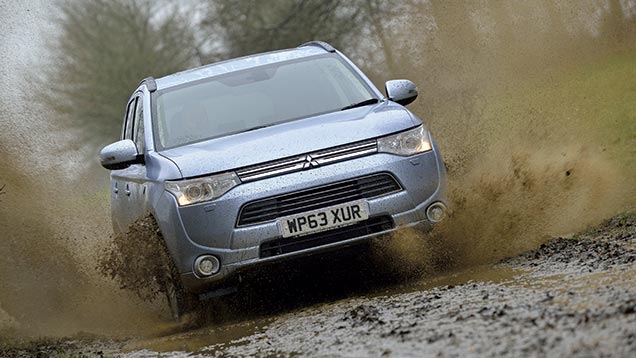 Mitsubishi became the first carmaker to build a 4×4 that gets its propulsive power from a plug socket when it launched the Outlander PHEV last year.

Other hybrids, from the likes of Lexus, Peugeot and Porsche, also pair-up a petrol engine with assorted electrical paraphernalia, but they don’t have a plug-in option – the batteries can only be charged by the engine.

In Mitsubishi’s case, two electric motors are bolted at either end of the car and run off a 12kWh battery carried between the axles.

See also: Get the best from a second-hand Land Rover Defender

The most efficient way to recharge is to use the tangle of cables in the boot to plug directly into a power socket.

If you’ve got a renewable energy source such as a small wind turbine or solar panels then it’s effectively free fuel, but the limited storage capacity means we found it lasted 15 miles at best.

Charging on the move

The batteries will also charge themselves on the road, either from the 2-litre petrol lump or via a braking system that soaks up wasted energy as the driver prepares to jump on the anchors.

The degree of its severity can be set in five stages using paddles behind the wheel, though the most ferocious of these brings the car quickly to a halt without putting the brake lights on – a sure-fire way to get rear-ended on the M25.

At low speeds the Outlander is a noiseless operator. However, electric-only mode can’t cope above 70mph, so the petrol engine kicks in and immediately obliterates the fuel economy.

We averaged 25mpg, and the pathetically small fuel tank means we had a season ticket at the petrol station.

A small diesel engine would make a better partner for the electrics, but unfortunately there’s not a big enough demand for that combination worldwide.

Unusually for a car harbouring a tonne of batteries, the Outlander’s plain contours do little more than whisper the car’s green-living credentials.

Instead, the existing Outlander was designed to accommodate the batteries, motors and inverters, so the car looks identical to its diesel-powered relative. Unfortunately, that means it remains one of the most unremarkable cars on the market.

The interior is as bland as a vegetarian’s dinner plate, too. Space is generous but the electric version is short of the third row of seats offered by its diesel compatriot and the sat-nav is difficult to use and quite obviously a retrofit.

However, it is still one of the more generously-specced SUVs on the market. Adaptive cruise control, which adjusts your speed according to the car in front, was fitted to our test model, as was a lane departure warning system.

We also had the pretentious-sounding forward collision mitigation, which turned out to be the sort of overactive back seat driver you’d just like to punch.

There’s a gap in the market for this type of car, particularly where stop-start trips are concerned.

It could be a cheaper-to-run option for short trips, but we couldn’t get close to Mitsubishi’s ludicrous claims of 148mpg and 32.5 miles from the batteries. The diesel-only version is far more practical and comes in at the same price.