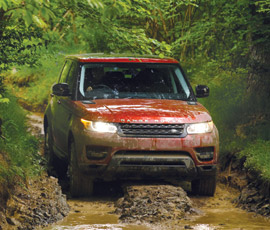 What does £50,000-worth of precisely engineered Land Rover metalwork have in common with a Suzuki Jimny and the loveable Fiat Panda?

Not at lot, you might think. And, to the relief of shiny-shoe-wearing owners of the Range Rover Sport, you’d be mostly right.

The Sport has traditionally been the car equivalent of the Lions’ front row, built on a solid steel chassis (and sharing the same heavy-duty underbelly as the Discovery) to bash and bully its way through any resistance.

But, over the years, Range Rover’s engineers have watched enviously as lightweight Jimnys and Pandas jink and scurry across rough terrain with ant-like ease.

So the Sport has been put on the automotive equivalent of the Atkins diet. Aluminium has replaced steel to reduce total weight by 420kg and it shares the same underpinnings as the big Range Rover. The result, in simple terms, is a more agile, quick and efficient car.

From the outside it’s got more than a hint of the Evoque about it. A curvy, slightly bulbous nose and narrowing rear windows swoop round to a less tastefully sculpted rump. The rear lights are too small and the split exhaust pipes too close to the central skid plate. But then nothing’s perfect

Fuel consumption has been trimmed by 24% and the supercharged version can hotfoot its way to 60mph in five seconds. A full dose of right boot will see the speedo hit 155mph, as we found out in a sprint on Cotswold Airport runway.

However the ride is more jittery and less elegant than its smooth-moving bigger brother, particularly when you swivel the terrain response dial to “dynamic” mode and the drivestick into sport. 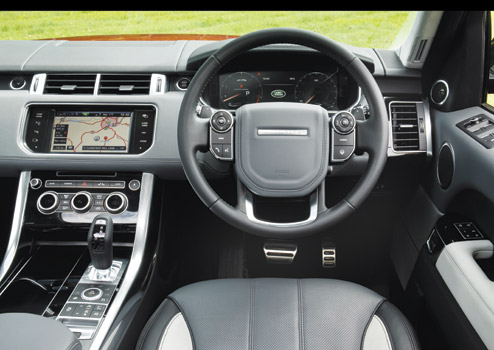 This firms the ride, reduces body roll and makes the steering more responsive to help the Sport bob and weave between stray Brecon Beacons sheep on our test route up through mid-Wales.

Jabbing the throttle of the V8 supercharged petrol version sets off a series of mini eruptions under the bonnet as you hurtle towards the horizon. The downside is that the engine drinks with the enthusiasm of a desert camel after a long walk.

For those that like their cars a little more reserved (and less thirsty) there’s a 258hp TDV6 and 292hp SDV6, which both gain power on their predecessors.

Most current Range Rover Sports can be found bullying inferior gas-guzzlers in the outside lane of the M25, so it’s fair to assume that off-roading was pretty low down the design agenda.

You’d be wrong, though. Land Rover’s terrain response system, which has been rescuing off-roaders from bogs and mud for many years, has been refreshed.

You can still swivel the knob to pick between general, grass/gravel/snow, mud/ruts, sand or rock crawl. But for off-road novices (or lazy drivers) there’s now an auto mode, which leaves the car to pick the most suitable setting.

All-season tyres are standard and ground clearance has been increased to 278mm. If you’re doing lots of off-roading then pick the four-wheel drive version with a two-speed transfer box and low range. Occasional off-roaders will prefer the cheaper, lighter alternative – a single speed box that feeds spoonfuls of power to the wheels with most grip.

A central screen displays what’s happening underneath. This includes wading depth – a new feature that uses wing-mirror-mounted sensors to indicate how close the water is from the engine’s vitals.

The 200mm touchscreen also gets Land Rover’s dual-screen set-up to let the passenger watch television while the driver keeps an eye on the sat nav.

The rest of the cabin is surprisingly minimalist for such a high-tech car. As usual there’s little to fault Range Rover’s interior design with suede-lined A-pillars and a leather-clad dash.

Changes in the rear half of the car are more radical. The wheelbase has been stretched by 178mm to solve one of the old car’s biggest gripes – second row door size. A further row of seats is now available in the hindquarter to boost the Sport’s family appeal, too.

Well dressed, stylish and smooth, but it’s still a Land Rover at heart. It’s the best SUV on the market and £20,000 cheaper than the Vogue, too.