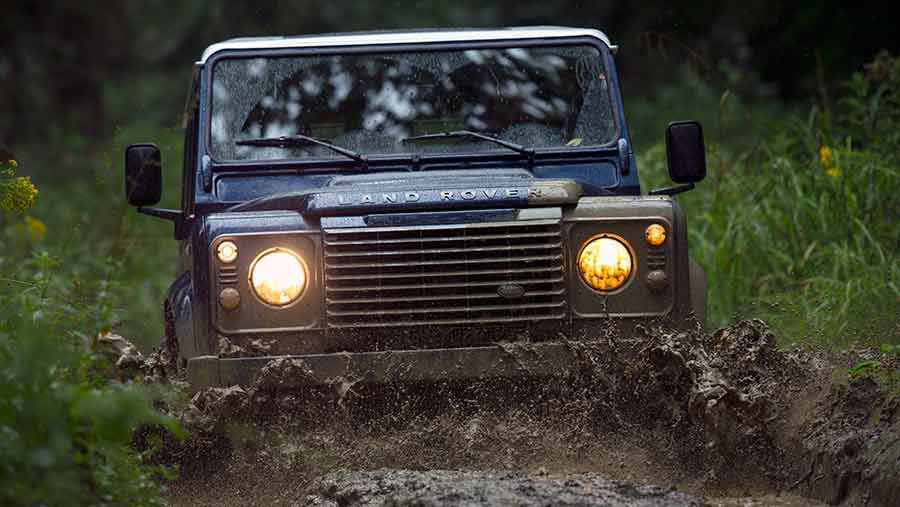 Rival 4x4s have come and gone, but until now the Land Rover has been the only choice for thousands of farmers up and down the country. As the sun sets on the current model’s glittering career, Oliver Mark takes a swansong drive in one of Britain’s automotive icons.

The Land Rover Defender’s time might be nigh, but the sight of British agriculture’s poster boy lying ominously with its head on the chopping block has sent us all into a nostalgic frenzy.

Since the announcement was made, sales of the old warhorse have gone berserk and production at the Solihull factory has been ramped up and extended to cope with the burgeoning demand.

Despite its frailties and the fact that it has continued largely unchanged for decades, it remains the romantic choice for anyone after a proven off-roader.

Its out-dated design personifies our uniquely British love for grit and pluckiness over pure skill and we’ve all been sent delirious with reminiscence even before the final nail has been bashed into the Defender’s coffin.

The Station Wagons have evolved almost unchanged from the original Land Rover Series I built in 1948.

The love affair really started with production of the models we now know as the Defender. The 110 debuted in 1983, before the 90-sized version joined a year later.

The machines came with coil springs to make for a more comfortable ride as well as permanent all-wheel drive with a two-speed transfer box and lockable diff. At the time there were few rivals to match the towing capacity and go-anywhere ability of the Defender.

Since then more sophisticated pick-ups have arrived, which are now more than able to match, and out-do, most of its credentials.

But its biggest problem is that the old-fashioned design can’t meet modern safety standards across Western Europe and Land Rover has starved the Defender of any sort of investment. The fact that it will take just a hammer and wrench to fix a majority of its ailments says a lot about its simplicity, and it will continue to suit buyers in less developed countries for plenty of years to come.

In the mean time, Land Rover has announced a new version will be built in Slovakia and arrive in 2017, but it will no doubt lose a lot of the features that have made it so popular for so long.

Production was due to be cut off in December but a huge glut of orders meant the inevitable chop was delayed. The final Defender rolled off the Solihull production line last week, despite order books being slammed shut back in June last year.

In all that time very little has changed. The boxy body continues to give aerodynamics the two-finger salute and Land Rover has stuck with the small windows and circular lights of old.

Its silhouette is unmistakeable and, with a lick of black paint, still draws admiring glances from the ladies in West Berkshire’s poshest villages. Yet, unlike the rest of the increasingly pretentious Land Rover range, the Defender remains egalitarian and accepted by all.

The interior has moved a little more with the times. All the controls are clustered in the centre of the dash and thumb-friendly electric switches have replaced most of the manual parts, including the windows. That said, the old-school feel remains and the footwells still fill with water after a heavy shower.

Sticks carry the windscreen wipers and light controls and a square dash runs along the front. Vintage it might be, but unfashionable it certainly isn’t.

The roar of engine, tyres and wind through the wafer thin underbelly dampen any chance of conversation with passengers and the fresh air vents at the front are welded shut, so the blowers are the only way to keep any dodgy smells from drifting under the driver’s snout.

The long gearstick quivers at road speeds and takes a bit of encouragement before it clunks through the gates, while the clutch seems designed specifically to tone the driver’s left leg muscles. The turning circle would make a good joke in years to come, and the steering is generally pretty aimless, too.

The more expensive leather seats are one bright spot and bring an unexpected degree of comfort, but are still fitted a natt’s do-dar from the door leaving no space for the right arm.

However, it would be unfair to dwell too long on its shortcomings over so many miles. Away from civilisation the Defender excels.

Those bouncy coils that leave it swaying like a ship around the Cape of Good Hope on the road are perfect for bumbling along rough farm tracks and it demonstrates plucky courage over any terrain.

Good ground clearance, meaty tyres and a low gearbox means it copes with most things that Mother Nature can throw at it. Even in high range, first gear is conveniently short for off-highway travel but means second gear is a sounder choice for pulling away.

If we’re all misty-eyed already, think what might happen when we look back in 20 years time and the loss of the Defender has dripped slowly through the prism of time.

It’s a real shame that it’s come to an end, but the reality is that the old dog has way too many shortcomings to compete with Japanese pickups long-term and is priced well out of touch with most of its rivals.

Looking forward, expectations aren’t high from a farmer’s point of view for the coming generation. It’s bound to have more electrics, more sophistication and, let’s face it, more to go wrong on a car that’s never had a strong track record in that department anyway.