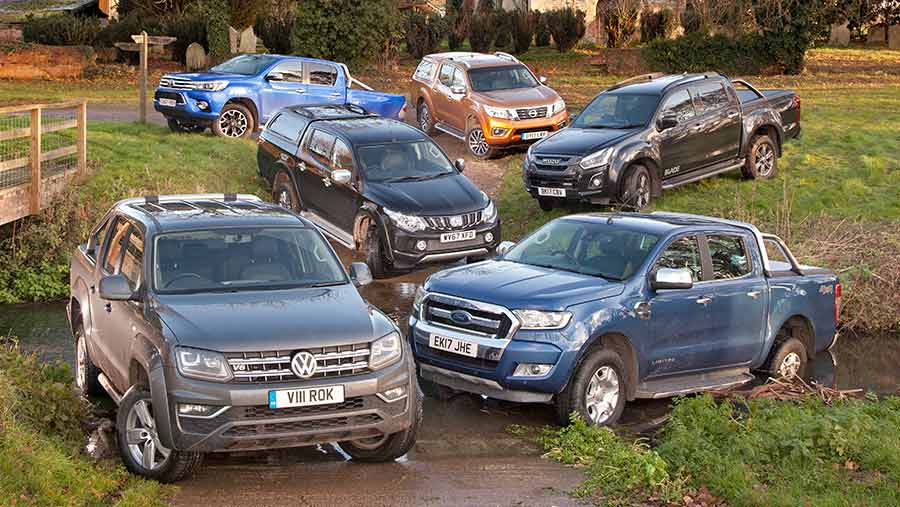 Pickups have come a long way in the past couple of decades, going from low-tech load-luggers to luxury runarounds with enough toys to rival the plushest 4x4s.

That means features such as full leather interiors, satellite navigation, adaptive cruise control and sophisticated traction control are all firmly on the menu.

Engines have got gutsier, too, transmissions have become slicker and towing capacities have gone up.

But along with these rises in performance and swankiness comes a significant price hike. Pick a top-spec VW Amarok, for example, add a few nice-to-have options, and the list price will run to almost £40,000. That’s nudging Discovery and Touareg money.

However, the benefit of these trucks is that they promise to do it all, towing a trailer load of hoggets and deck full of feed one day, while cruising to Legoland with the kids the next.

To see how well the latest round of pickups delivers on those aims, we set about assembling a test group.

Read the six tests in the box below and see the specs guide at the end of the article or download a PDF version.

Read all the tests

How the test worked

To give them a proper going over, we assembled a six-strong group of testers. Ages ranged from 28 to 65 and included farmers, journalists and our Vauxhall Zafira-driving photographer.

The test included a mixed-driving fuel consumption test, towing and off-road routes, as well as some longer-distance road runs.

Understandably, these trucks will seem far too over-the-top for a lot of farmers (most of our test group drives basic trucks from the early noughties), but they do account for a surprising number of sales into agriculture – as a quick glance around the Lamma car park will confirm.

Also, it’s the only fair way to include vehicles like the Amarok and 3.2-litre Ford Ranger that don’t come in basic spec.

However, other than the VW, all the brands featured offer more utilitarian versions of these trucks that are nearer the £20,000 mark.