Romania’s remedy to the spiralling cost of family cars is the Dacia Logan – a vehicle that, in its most basic guise, provides spartan four-wheeled transport and shedloads of boot space.

Prices for the vehicles,built in Romania using old Clio parts and a few components from the Renault-Nissan-Mitsubishi Alliance, start at just £8,500. That makes the MCV the cheapest estate car on the market.

However, it’s worth noting that unlike most vehicles we feature in Country Car, the Logan MCV is two-wheel drive only and the version we tested – the Stepway Comfort – has a list price that is a dizzying £4,000 more than the base-speccer.

Here lies at least part of the secret to Dacia’s success.

Tight-fisted buyers are lured to the honeypot by base prices, then coaxed up the rungs by the sweet sound of a DAB radio, metallic paint (£505) and leather upholstery (£500).

Starting with a brutally basic vehicle means optional extra are abundant and easily tailored to the buyer.

If you can bear to keep the spec, well, bare, and resist temptations to indulge, the Logan MCV offers unrivalled value for money.

Quite remarkably, it is priced in the small city car bracket – think Volkswagen Up – and you can buy eight of them for a well-sorted Land Rover Discovery.

Granted, it could be eaten alive by the big Disco, but the Logan still serves up impressive estate-level carrying capacity. 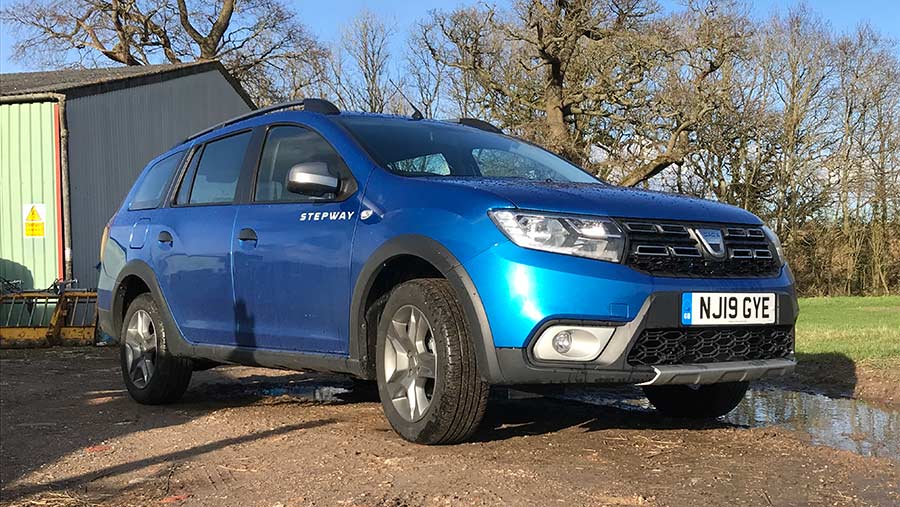 Despite its French underpinnings, the Logan – and the rest of Dacia’s Renault-derived range, for that matter – demonstrates no discernible hint of Parisian fashion or style.

The cheapest Access-badged models scream tight-arse, but even those dressed in the firm’s top-spec trim appear fairly basic, with exterior niceties extending to little more than impressively deceptive 16in alloy-look wheels and LED daytime running lights.

White paint is standard even on Stepways, though they do get a souffle-like ride height rise of 40mm to keep the sump out of harm’s way on farm tracks.

There are black wheel arch extensions too – the rest of the bumpers are colour-coded – which should be enough in the way of off-road concessions for most buyers.

As mentioned, there are plenty of options to up-spec – popular choices include a £450 towbar, £225 parking camera and, probably the most important for rural life, rubber floor mats at £50 apiece. 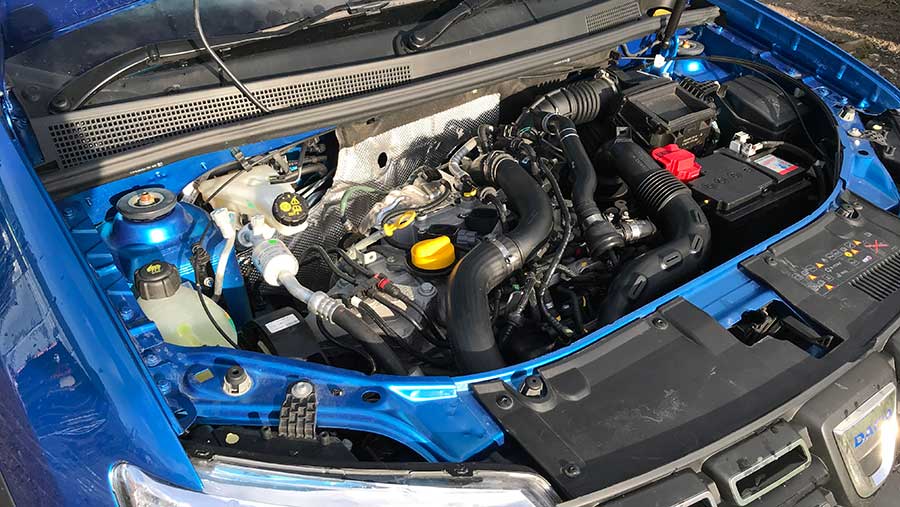 Until diesel’s recent bad press, the natural choice of power would have been the Logan’s 1.5-litre Blue dCi 95 which, as the name suggests, serves up an adequate 95hp.

However, focus has now switched to the turbocharged three-cylinder TCe90 petrol. It may be titchy – capacity is just 0.9-litres – but it’s not as asthmatic as you might think.

Its 0-62mph time of 12.4secs matches that of several big brand pickups and a top speed of 104mph illustrates its ability to hold its own during an occasional dalliance in the fast lane.

Acceleration is spritely enough to keep gear changes in the five-cogger to a minimum and volume is restrained too, which is fortunate as the engine doesn’t exactly sing. In fact, it’s worst on idle, where it sometimes rattles like a ball bearing in a baked bean tin.

The downside is that a small engine worked hard isn’t a formula for longevity and power delivery can be a bit lumpy.

The suspension is soft and bouncy, so can cope with the odd pothole, but handling is on the untidy side.

Its shell is cast out of a material little thicker than premium tin foil, which makes it lightweight and means it gets blown around by strong winds and high-sided lorries.

Quoted combined consumption is 44.3mpg and we notched an impressive 42.5mpg during a week of steady driving.

For excursions outside the county there’s also cruise control – though the buttons are plonked low down on the centre console (presumably where the engineering department left them) – and a speed limiter included in the Stepway package.

Of course, the biggest catch for countryside folk might be the front-wheel drive – if 4×4 is a necessity then eyes will inevitably wander to its stablemate, the Duster. 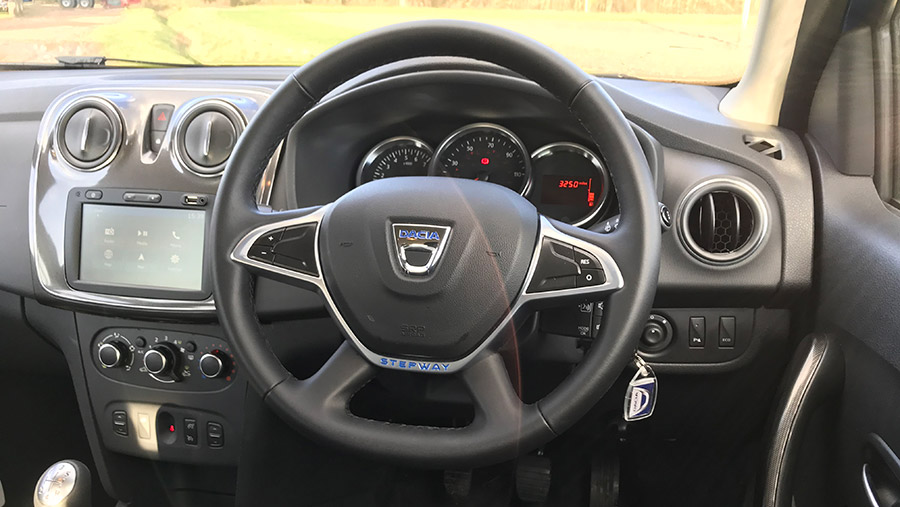 While Access trim is barren – evidenced by the lack of a radio and inclusion of wind-up windows – Stepway models are reasonably well furnished.

Breaking the sea of monochrome across the dash is the surprising addition of a 7in touchscreen. It’s relatively basic but can run Apple Car Play and Android Auto.

The Logan’s stand-out feature is its commodious boot. Though it is based on a fairly small car, the body is narrow and long. This sees the 573-litre space grow to 1,518 litres with the rear seats folded down, which makes it bigger than the Duster and many of its rivals.

And because materials are generally on the hard and unpolished side, there’s nothing to get precious about when ramming in bits of furniture, muddy boots or four wet dogs.

In fact, the only downside is accessing it – rather tediously, it’s opened by turning the key in the lock, which is mightily inconvenient with hands full.

Dacia’s recipe, cooked in Romania using French ingredients, is never going to be one for the motoring purists, but it is at least a partial success.

The company now has cheap end of the market pretty much locked down, particularly with the news that the Jimny is soon to leave the parish. In fact, as countryside-friendly vehicles go, Dacia only really has Suzuki and Ssangyong for company.

Naturally, budget builds come with their shortcomings – quality being the most significant – but the Logan will do a decent job of transporting people and luggage at half the price of equivalently sized vehicles.

Its significant downfall is a three-star NCAP safety rating but, if you’re willing to see past that, you’ll be bagging a lot of metal and space for your money.

There’s a three-year, 60,000-mile warranty and residual values are respectable too, so the Logan shouldn’t suffer from savage depreciation – just approach the options list with discipline.