Farmers Weekly are putting three £40,000 4x4s all hailing from South Korea to the test.

Here is how the Hyundai Santa Fe got on…

With a new Santa Fe due later this year, the old model is on its final hurrah but can still outdo its Korean cousins in the handling and comfort stakes.

That said, its uninspiring interior is dated, a little featureless and the third row of seats have clearly been shoehorned into a pretty small space that make them uninhabitable for adults, but it’s still the one we’d choose for a long jaunt down the motorway.

Whether you fancy five or seven seats, prefer a manual shifter or lazy-boy auto, there’s only one engine option – a 2.2-litre CRDi four pot.

This offers 200hp and does a perfectly good job of powering the two-tonner up to cruising speed. Planting a right boot into the carpet does make the engine a little too vocal at higher revs but, unlike the Rexton, it actually feels like it’s getting somewhere.

There’s slightly more choice in the gearbox department, with a six-speeder available in both manual and automatic guise. Our test model came with the latter, although we found the lack of a gear position readout slight disappointing.

The Santa Fe is missing the slickness of the Rexton’s seven-cog box and the Sorento’s an eight-cogger when pushed hard, which goes some way to explaining the engine noise during faster-paced journeys.

That said, the auto was smooth at low speeds and acceleration to 62mph is achieved in a respectable 9.6 sec. Surprisingly, the Kia’s stats read half a second quicker, but we thought the Hyundai delivered the power better and was the more responsive from a standing start.

Hyundai’s consumption stats better both of its rivals too. On paper, it suggests 42.8mpg is realistic, but during our test we tallied 33.8mpg, putting it a smidge ahead of the Sorento and the top of the rankings.

Smooth progress is helped by the advanced traction cornering control, which did its best to keep the Santa Fe level and seated through the bends, sending torque to the wheels with the most grip and gently braking the inside wheel if required.

Sitting closer to the tarmac also helps, though it has repercussions where ground clearance is concerned. 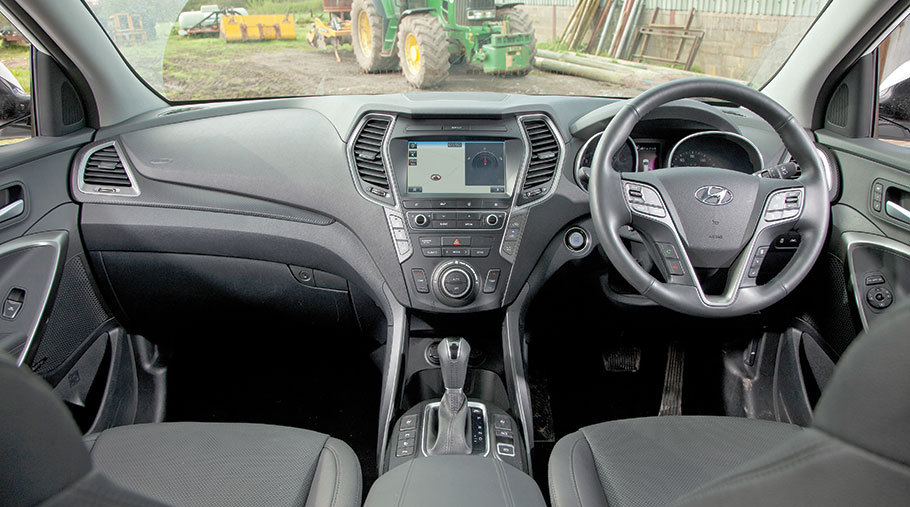 Our test vehicle was a Premium SE model – one below top spec. It comes clad with nearly every conceivable extra you could wish for, so much so that it seems the designers ran out of buttons for the heated steering wheel and had to mount it awkwardly behind the indicator stalk, which is only visible to the passenger.

However, the cheap bulbous plastics have a distinctly average feel to them and the huge button selection could have been arranged in a more user-friendly way.

Both the Sorento and recently revamped Rexton beat the Hyundai with their more modern, well laid out dashboards and better choice of materials as opposed to cheap plastic, with the Rexton’s screen a particular standout.

An optional convenience pack includes adaptive cruise that tracks the speed of the car in front, while it also had the luxury of a panoramic roof.

Unfortunately, the lack of head- and legroom means the third row of seats definitely isn’t practical for anyone close to 6ft and they’re also difficult to get into.

Leaked pictures of the new model suggest Hyundai has been to the same Korean parts shop as Kia, with many dashboard controls and button clusters near-identical to the Sorento.

The Santa Fe has bog-standard Macpherson struts at the front, which we found did a decent job of smoothing out some of Shropshire’s deepest potholes. However, the lack of a low-range box means the Ssangyong is the only one of the three to have any real off-highway pedigree.

In similar fashion to the Kia, it uses a central diff-lock that will get you out of light trouble and it was performed pretty well on some grassy slopes and muddy banks. That said, possessing the lowest ground clearance of the lot (at 180mm) doesn’t set it far apart from most off-road estate cars.

Its compact and sleek design has other perks though, such as sliding into spaces in Sainsbury’s car park where it’s much easier to manoeuvre than the boat-like Kia.