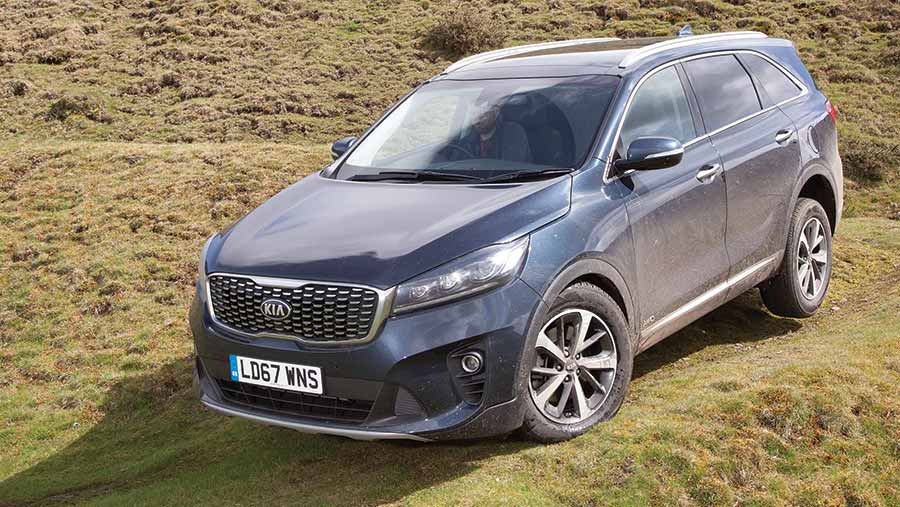 Farmers Weekly are putting three £40,000 4x4s all hailing from South Korea to the test, this time the Kia Sorento.

Like Hyundai, Kia keeps things simple with a single engine option, so six-cylinder shoppers will have to look elsewhere.

The 2.2-litre turbodiesel delivers 197hp across all five trim grades and is fitted with a plastic intake manifold, cylinder head cover and oil filter housing to keep weight to a minimum.

From the outside, the block has a lumpier idle than its two rivals, but the clatter is fairly well damped in the cabin and the abundance of gears keeps the engine hushed at 2,000rpm on motorway jaunts. Tyre noise is more of a problem, interfering with phone conversations at high speeds.

Performance, too, is unremarkable and the power band is pretty narrow, so it needs to be worked in the middle of the rev range if it’s to deliver any sort of punch.

The third generation of Kia’s flagship model now demands an asking price of nearly £40k. That gets you an enormous spec list, decent build quality and loads of space, but the driveline doesn’t get the pulse racing and urban driving aids are favoured over genuine off-road ability. We’d save a few quid and go for a lower-spec version.

The Sorento’s recent upgrade saw the old six-speed automatic gearbox replaced by an in-house-built eight-cogger that is standard on top spec models and optional on most of the others. It’s one of two options; the other being a marginally cheaper six-speed manual.

We found the auto’s standing-start reaction times a bit sleepy – so fast pull-outs from gateways and roundabouts need to be judged carefully – although it’s nowhere near as sluggish as the Rexton.

That said, the stack of ratios makes acceleration slick, as well as helping to trim emissions and improve fuel consumption. Official figures suggest a 43.5mpg average, although we found rural driving delivered a little over 33mpg and motorway cruising notched nearer 40mpg, which puts it a smidge behind the Hyundai.

Surprisingly, the stats suggest that it’s quicker than its rivals, but we felt acceleration to be fairly pedestrian – partly down to its loafy driving characteristics.

In fact, the driveline lends itself to a pretty chilled driving style – the ride is a bit wallowy but comfortable, suspension is fairly soft and it’s best when taking corners at a moderate pace.

Functional is the operative word here. The Sorento’s interior is all about space and carrying capacity, but it also looks a bit smarter than its rivals. 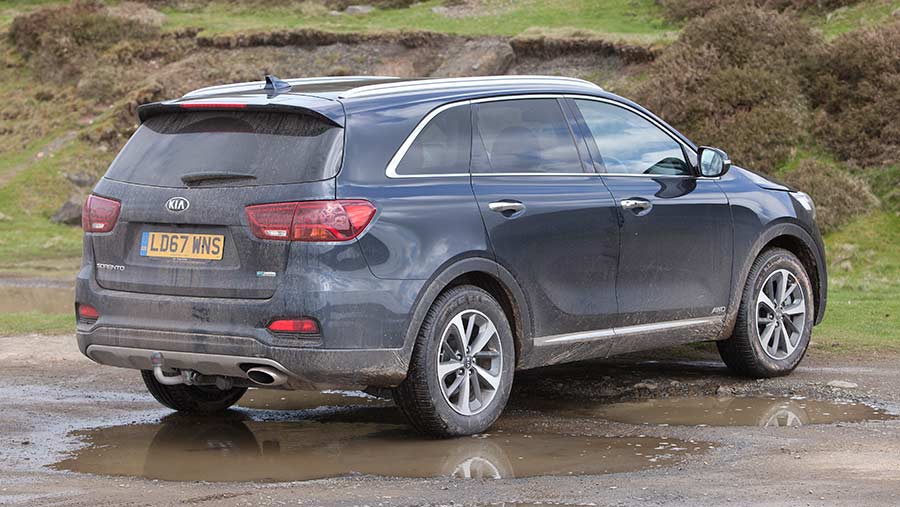 The third row gets its own air con controls and far more leg room than those in the back of the Santa Fe, while middle row occupants are treated to heated seats.

Space for heads and legs is decent throughout – all improved on the Sorento’s latest update – and the driving position feels high and commanding (until you pull up alongside the Rexton).

However, the seats are uncomfortable and lack side support, and the view rearwards is limited by the big pillars and windows that get progressively smaller. 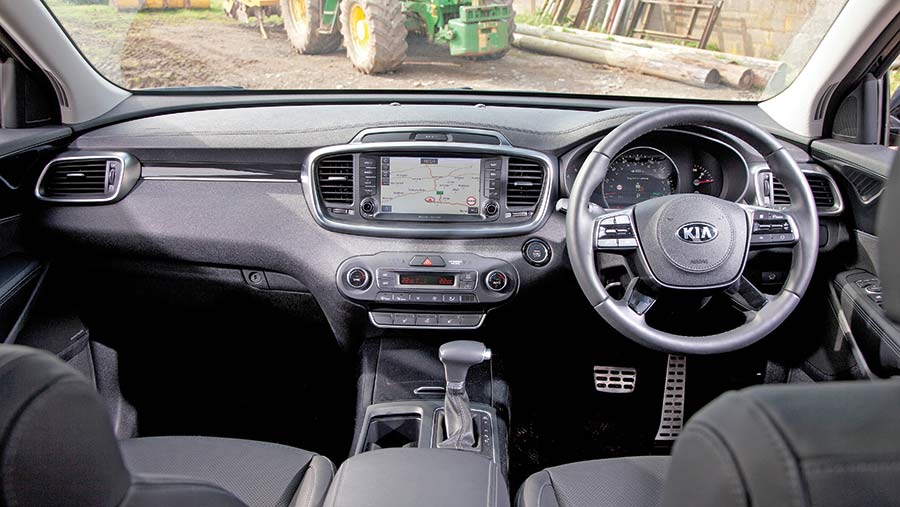 That means relying on a reversing camera that includes a 360deg bird’s eye view, part of a loaded spec list that also features a plain-but-fine 7in touchscreen with speed limit read-outs, panoramic roof window, powered tailgate, and a “premium” sound system, but the stack of functions means there are dozens of buttons dotted around the dash.

Other imperatives for family transport include decent storage space and hard-wearing surfaces that can cope with muddy feet and spilled drinks – the Sorento ticks both of these boxes.

All-wheel drive is standard and runs via a multi-plate clutch, but where traction is no problem the drive is sent solely to the front wheels. This can switch up to a 60 front/40 rear split during regular driving.

There’s also a lock mode engaged through a console button that locks the central diff to split torque evenly between the two axles at speeds of up to 25mph.

However, Kia’s latest update has made the Sorento much bigger, which has pretty much turned it into a proper people carrier with a 4×4 edge.

Approach and departure angles are a long way off the standards set by the Rexton, and the auto model can tow a braked trailer of only 2,000kg (manuals will pull 2,500kg).

Instead, the company has focused on adding driver aids for the urban driver, such as lane departure alerts, cruise control (top-spec models have adaptive cruise) and blind spot detection.