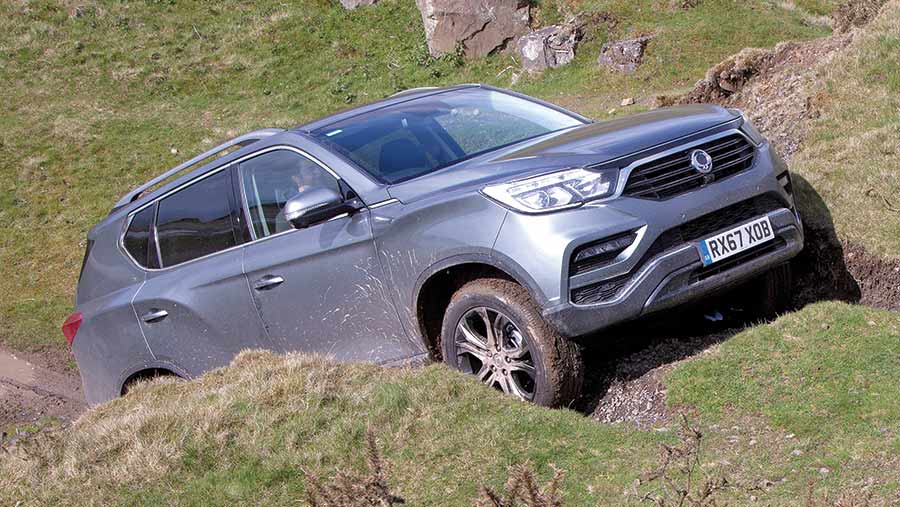 Farmers Weekly is putting three £40,000 4x4s all hailing from South Korea to the test. This time it’s the  Ssangyong Rexton, which stands out as a rugged all-rounder with a few rough edges.

If you’re after a genuine off-roader or towing vehicle then the Rexton easily trumps its fellow Koreans. With a tough ladder chassis, 3.5t towing capacity, selectable four-wheel-drive and a low-range transfer box, it’s got most bases covered for rural motoring. However, under the plush option-packed interior it’s a fairly crude beast, with harsh suspension and juddery steering that make long tarmac drives a little tedious.

Up front, the Rexton is fitted with Ssangyong’s own 2.2-litre four-cylinder diesel that serves up a respectable 181hp and 420Nm of torque. This doesn’t set the world alight when it comes to on-road performance, but as you might expect, that’s not really what this car is about.

For those who are interested in the figures, the spec sheet quotes a 0-60 time of 11.9sec and a top speed of 115mph, both of which are a good bit lower than the Kia and Hyundai. Its sizeable frame and heft also meant it had the poorest fuel consumption figure of the test group at 29.2mpg.

On the plus side, it delivers its peak torque at slightly lower revs than the other two, which should help when moving off with a heavy trailer in tow.

Continuing Ssanyong’s long-running relationship with Mercedes-Benz (the first 1991 Musso was a joint project between the two brands) our Rexton came with a seven-speed Merc automatic.

It’s a fairly smooth shifter and when teamed with the low-range transfer box it gives plenty of cogs to play with. As well as the standard drive mode, there’s the option to select the seven gears manually. However, the small plastic tab on the side of the gear shifter for controlling this function is a rather nasty item.

There’s a rocker switch for activating winter mode too, which allows the truck to set off in second gear, reducing the chance of wheel slip.

For those who would rather do the shifting themselves there is the option of a six-speed manual gearbox.

At first glance, the interior looks impressively plush and is packed with every conceivable option, from heated and cooled seats to lane change assist and forward collision-warning systems.

However, when you peer a little closer it soon becomes clear that the quilted leather and chrome facade is masking some fairly low-end plastics and switchgear.

This isn’t an expensive truck though, so for the considerable saving you’ll make over buying one of its nearest rivals – the Mitsubishi Shogun or Toyota Land Cruiser – there’s got to be a little payoff. 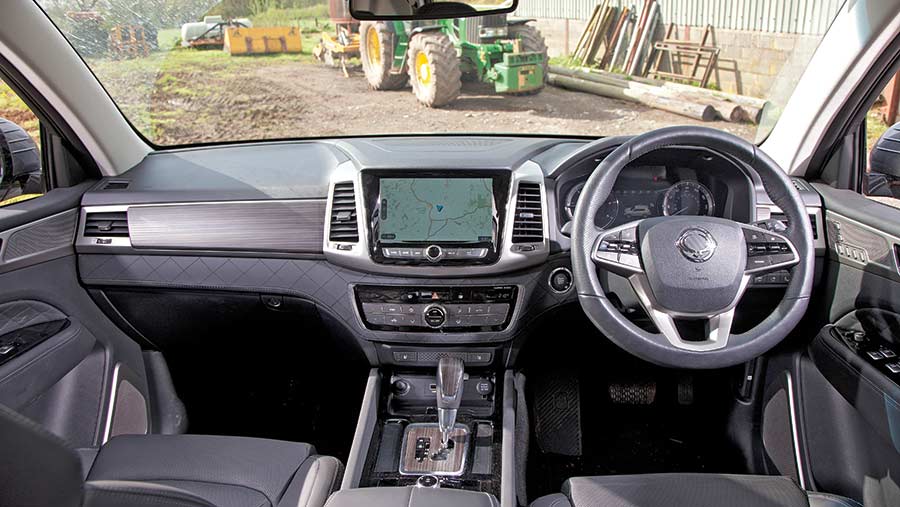 The generous spec continues on the dash, where there’s a crisp 9.2in screen housing a Tom Tom satnav, Apple Carplay and Android Auto, and a multi-view reversing camera.

That latter feature was little disappointing compared with the offerings from Hyundai and Kia, but it was still nice to have.

Rear seat passengers get ample legroom, heated seats and their own climate control settings. A third row of seats is available too (taking it to a total of seven), but they weren’t fitted in our model.

Off-road ability and towing is where the Rexton comes into its own. Unlike a lot of plusher SUVs that feature permanent four-wheel drive, it’s got a switchable system, much like a pickup. 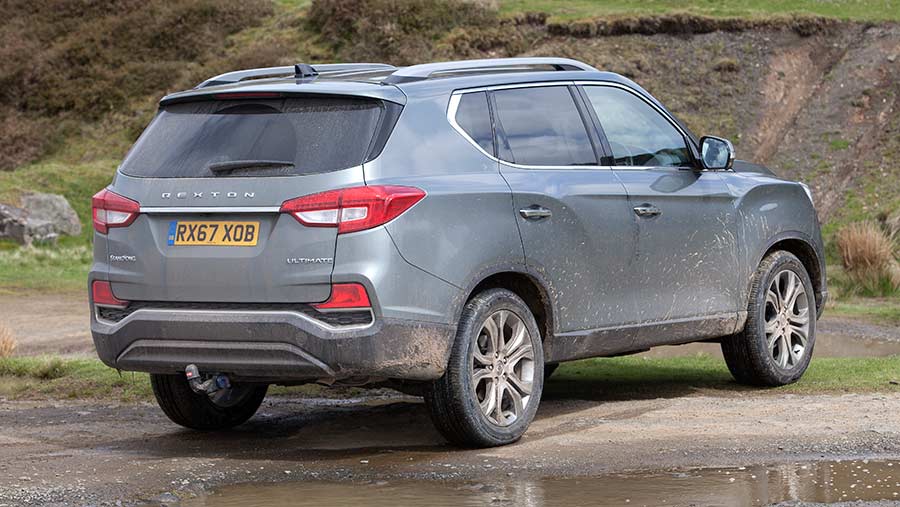 That means it runs in two-wheel drive on the road and a flick of the central dial slots it into high-range four-wheel drive when needed. There’s also the option of low-range, for which you need to be in neutral with your foot on the brake before it will engage. As with most of these electronic systems there’s a bit of a pause with some flashing lights while it gets round to slotting it in.

The ESP traction control system attempts to improve traction off road, but if you want to drive it properly you can turn it off. Thankfully this does seem to lie dormant and let you have full control, unlike some others.

For those who do rate techy off-road diving aids, there are both hill start assist and descent control systems on offer.

As for towing, the truck’s hefty ladder chassis and 3.5t  capacity is about as good as it gets. Our only grumble was that the towbar supplied was fitted too low for an Ifor Williams stock box.