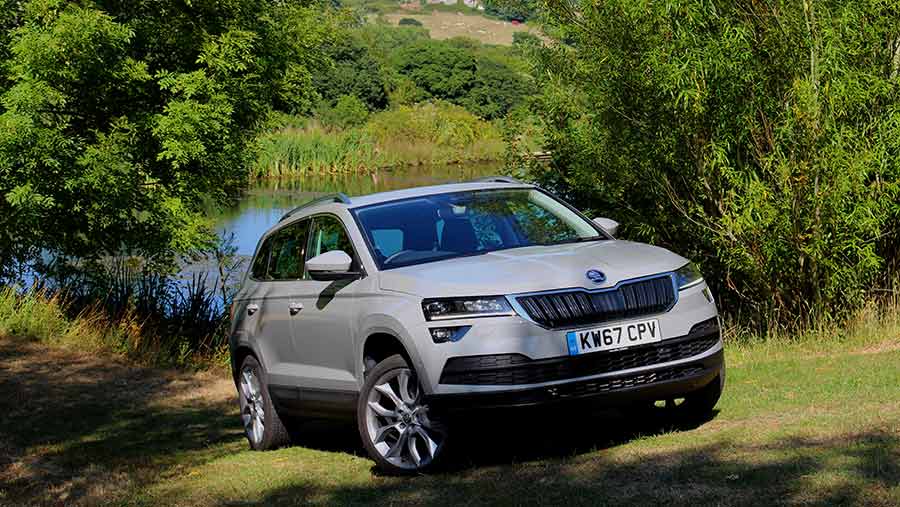 Just when you thought you may have been running out of options for compact SUVs (said no-one), up pops another one. Hang on, don’t I recognise you?

Well, you’re correct. It’s actually a slightly shorter version of VW’s Tiguan and a more sedate offering to Seat’s Ateca. They all have the same monocoque chassis, although the differing body shells provide mild distinction, as does the badge on the bonnet.

Although the Karoq has replaced the Yeti, there is little resemblance to the latter anywhere on the newcomer. It actually takes guidance from its bigger brother, the Kodiaq.

LED lights and chiselled lines reveal a car that’s decent on the eye. The absence of colour-coded bumpers is a let down, but with plenty of competition for buyers in this booming sector, is there room for multiple variations on the same theme.

Our test vehicle had the 2-litre TDI, which offers a respectable 150hp and is the most powerful in the Karoq line-up.

It is quiet and capable around town and settles down on flatter long jaunts, although we found it short of puff when loaded with five bods and it tends to become a bit despondent with the added weight.

There is another smaller 1.6-litre diesel churning out a comparatively princely 115hp, while the petrol lumps come in 1.5-litre and 1-litre formats, matching the power of the larger and smaller diesel engines.

The larger diesel is actually quite thirsty for its size and struggled to tally much more than 40mpg fully loaded on a long run. It would be more bearable if the engine were able to provide you with a thrill now and again, but instead it trundles along and never threatens to excite.

Skoda has put the seven-speed DSG box in the top-spec Edition as standard, but a six-speed manual is available, too.

Somehow the engine and shifting unit don’t seem happily matched – the transmission is jerky, especially from standing, though this could be down to the Virtual pedal Skoda has installed.

Costing an additional £650, it applies the handbrake at any given opportunity, so when you’re crawling along in stop/start traffic the pedal comes on every time the car stops. It’s then a jolt to get going again, as if releasing an electric handbrake.

Some rolling Cornish hills allowed us to test out the Skoda’s cruise control. It made a bit of a meal out of the work, violently dropping a couple of cogs after falling a couple of mph away from the planned cruising speed before then overrunning by a few mph on the downhill section.

There’s no adaptive cruise control, either – just a small and seemingly pointless symbol on the dash advising that you are too close to the car in front. 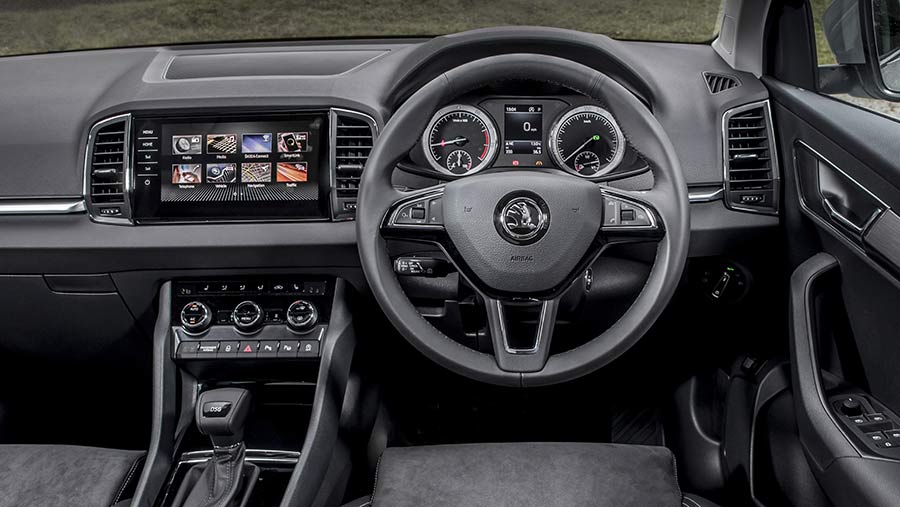 Skoda has been producing some plush interiors in the past few years and the Edition model is no exception. The super-crisp 9.2in touchscreen has been seamlessly integrated into the centre of the dash and is very easy to navigate.

Our test car had plenty of toys including a reversing camera, panoramic roof (which only opens halfway), electric boot and parking assist (£300 extra), with the latter very capable, once you fathom how to use it.

The leather seats are comfortable, though taller colleagues may struggle as there are no extendable leg supports on the driver’s seat.

A trump card for the Karoq is the huge boot, easily capable of swallowing a few sacks of dog food and a pushchair, while a couple of iPad holders – at £25 a pop – should keep the kids quiet in the back.

The Columbus sat-nav can be operated by voice instructions and, unlike some other systems that can’t grasp accents, it provides some helpful examples that pop up when speaking. We followed these and it seemed to grasp every command we barked at it, which saves fiddling with buttons and taking your eyes off the road ahead.

The Karoq gave a decent account of itself off-road and the hill descent control does a grand job of bringing you down gently.

Three vehicle angle dials appear on the touchscreen when off-road mode is selected, in the style of an early 2000s Mitsubishi L200.

Added to that, a new Karoq Scout model has just been launched, which has all-wheel-drive as standard and comes better equipped for off-roading.

One downside of the existing model was an auto-stop feature, which uses the cameras and sensors to detect objects in the way of travel direction and prevent an accident.

We reversed down a country lane after meeting a tractor and could see exactly what was around us, yet the Karoq detected what we reckon was an overhanging weed from the bank and shuddered us to a halt.

It also kicked in when pulling over and demonstrated that this type of technology still needs polish, as it can have accident-causing effects when stopping unannounced.

The Skoda’s unenthusiastic engine was a bit of a let-down, especially with five people on board. However the interior was what you’d expect from a VAG (Volkswagen Audi Group) car nowadays, plenty of room and decent quality materials, miles away from the Skoda of old.

A big downside was some of new technology, especially the auto-stop, which at times was slightly dangerous. For slightly less than the asking price, you can have a two-year-old Land Rover Discovery – food for thought.