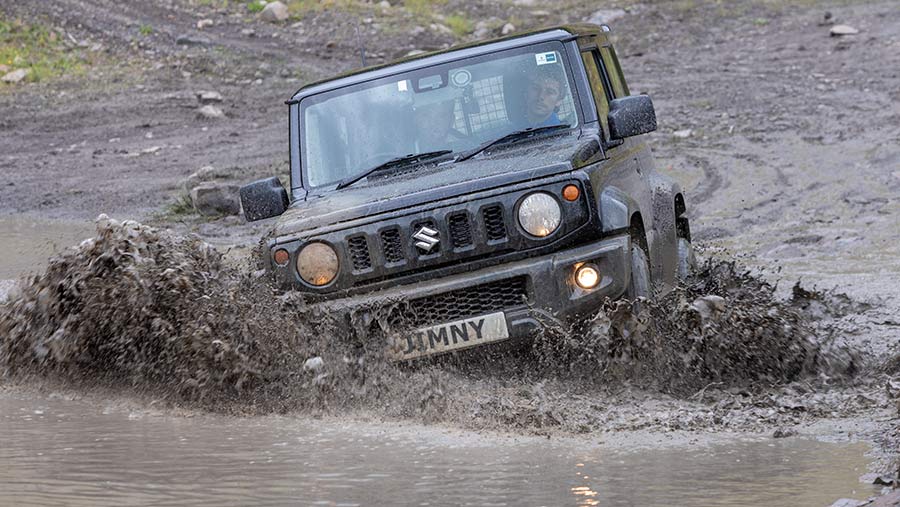 The cute-and-quirky Jimny, Suzuki’s little 4×4 with a big cult following, has made a welcome return to the UK market – only a matter of months after being withdrawn because of its high engine emissions.

However, this time it is dressed in its working clothes and comes armed with a commercial vehicle badge that means it can carry fewer people, but more cargo.

European legislation dictates that carbon dioxide emissions must average less than 95g/km across a car manufacturer’s total vehicle sales, and failure to do so can result in heavy sanctions that can run to tens of millions of pounds.

While the Jimny passenger car has never sold in huge numbers, Suzuki was understandably keen to avoid such a slap on the wrist, particularly as its emissions level – at nearly twice the target – would severely mess with all the good work the company has done in introducing hybrid models to its line-up.

However, vans fall into a separate and more lenient category, which has allowed Suzuki to launch a more practical version of its little off-roader.

Mechanically identical to the passenger car, the Jimny LCV meets the N1 classification for vans through the removal of the rear seats and their anchoring points, as well as the inclusion of a new steel and mesh bulkhead – the minimum requirements for conversion to a VAT-exempt commercial vehicle.

More importantly, though, it prolongs the life of what was proving to be an exceptionally popular car since the fourth generation broke cover in 2018.

Conversions of this nature are usually quite crude, but the Jimny LCV has been done well, with a neat rear loadspace and completely flat floor. The downside is that it’s tiny.

With a maximum length of just 916mm and a total capacity of 0.86cu m, it’s barely enough for a bale of hay – and that’s before you consider the weight allowance.

A payload of 150kg (due to limits on the rear axle) means the Jimny doesn’t really cut it as a bona fide van, which is a shame because in many ways it works as an excellent little runaround. 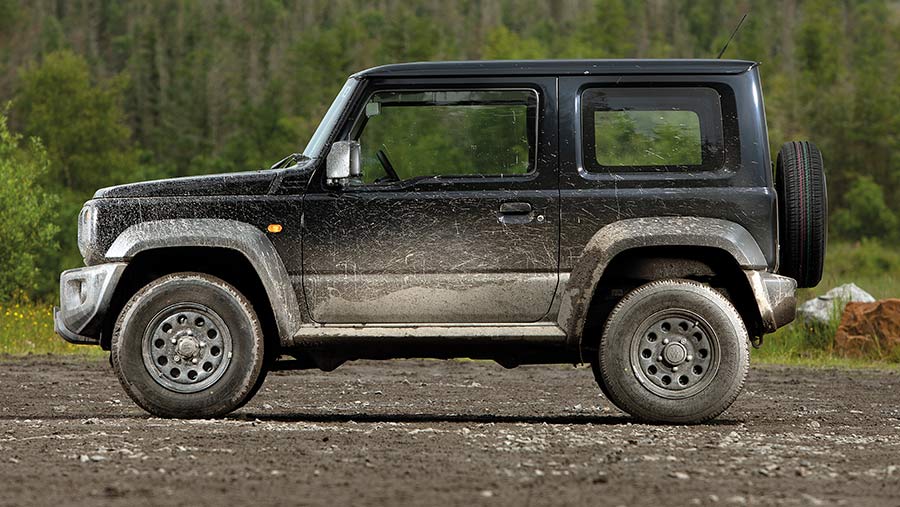 The 1.5-litre engine, unchanged from the passenger car, produces 100hp and 130Nm of torque. As it is petrol, maximum power comes at a lung-bursting 6,000rpm, with peak torque arriving at 4,000rpm.

It means the engine buzzes waspishly with any sort of load on board, which isn’t ideal for a commercial vehicle and gives occupants’ ears a bashing in the process.

For that reason, the prospect of regularly making use of the modest 1,300kg maximum towing capacity isn’t overly appealing, nor are long stints on the motorway, where 70mph in top gear comes at 3,500rpm.

Instead, it’s best enjoyed at low speeds, keeping ride bounce and sway to a minimum and making the slow steering less noticeable.

With a short wheelbase of just 2,250mm, it does tend to bobble along the road, despite the efforts of the three-link suspension with coil springs.

The five-speed gearbox is simple and solid, but has a slightly wayward feel about it, with indirect, long-throw changes like those of an early-gen Hilux.

The transfer box for the Allgrip Pro selectable four-wheel-drive system is unashamedly simple too, but the Jimny LCV can go anywhere the passenger version could – a considerable achievement for a vehicle with a smart electronics system but no differential lock.

However, in a farming context, and in comparison to a UTV – the most obvious rival in terms of carrying capacity and price – the Jimny is an attractive option. It’s safer, quicker and far more comfortable.

Its biggest off-road limitation is the 210mm of ground clearance, which is lower than that of the latest John Deere Gator.

However, unless you’re dropping into knee-deep ruts it shouldn’t be a problem, and the Jimny still has impressive approach and departure angles – 37deg and 49deg, respectively – for clambering out of any holes it falls in.

And with a kerb weight of little more than one tonne, it won’t get bogged down, either.

There have been no changes to the front half of the interior from the passenger car, so Jimny LCV buyers still get the utilitarian, no-nonsense dash with chunky dials and buttons. 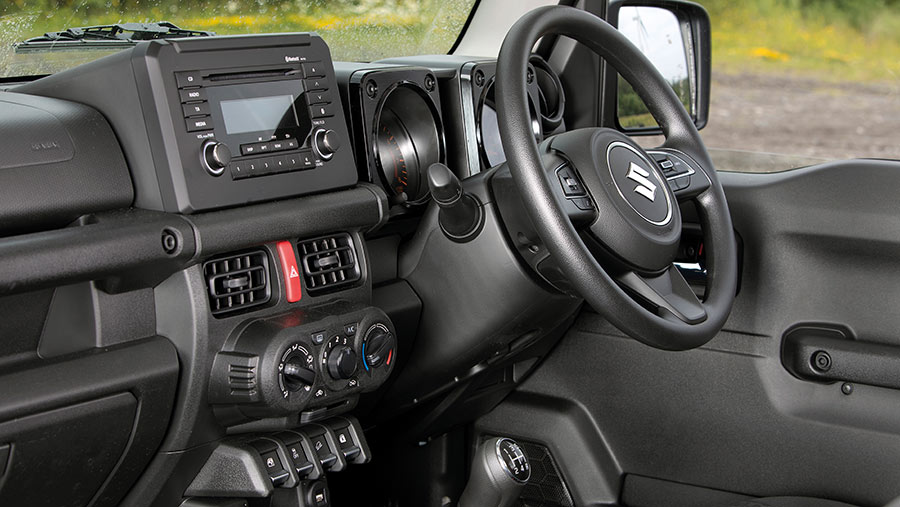 There are no trim level options, either – the commercial van is the lower of the two specifications offered on the car version, which means it is clad with tough, unfussy materials and technology extends to a simple DAB radio with Bluetooth.

It goes without saying that the Jimny LCV isn’t up to the standard of the new Land Rover Defender Hard Top, or a pickup, for that matter, but at less than half the price – £16,796 (ex VAT) – you wouldn’t expect it to be. 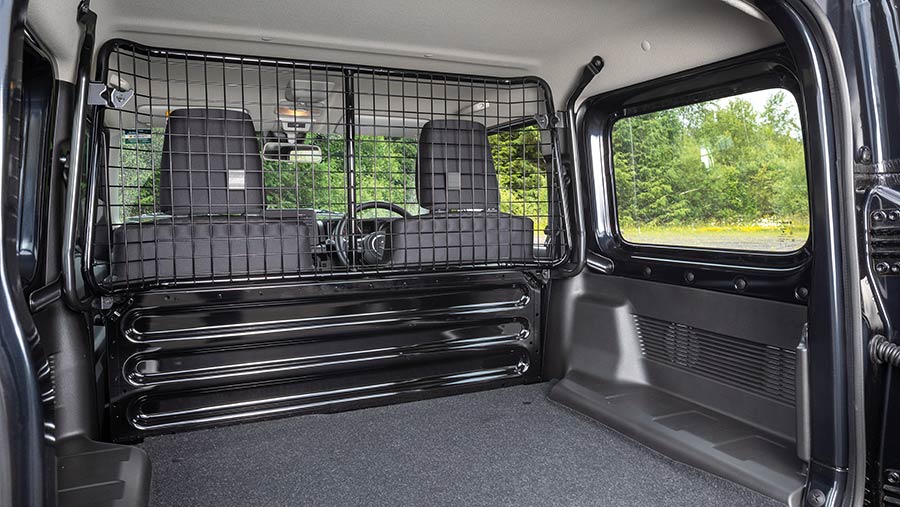 The rear seats have been replaced with a bulkhead and flat, carpeted floor © Suzuki

The Jimny LCV is a vehicle like no other.

It may be small, unrefined and a little uncomfortable for long journeys, but it makes a handy, cheap and practical alternative to increasingly expensive pickups.

It’s also less than half the weight and, with its short wheelbase, will get to places most pickups will not.

Perhaps more pertinently, it’s a serious alternative to a UTV, and one we reckon is well worth exploring.

The catch may be supply – if the popularity of the passenger car is anything to go by, you can expect them to sell like hot cakes