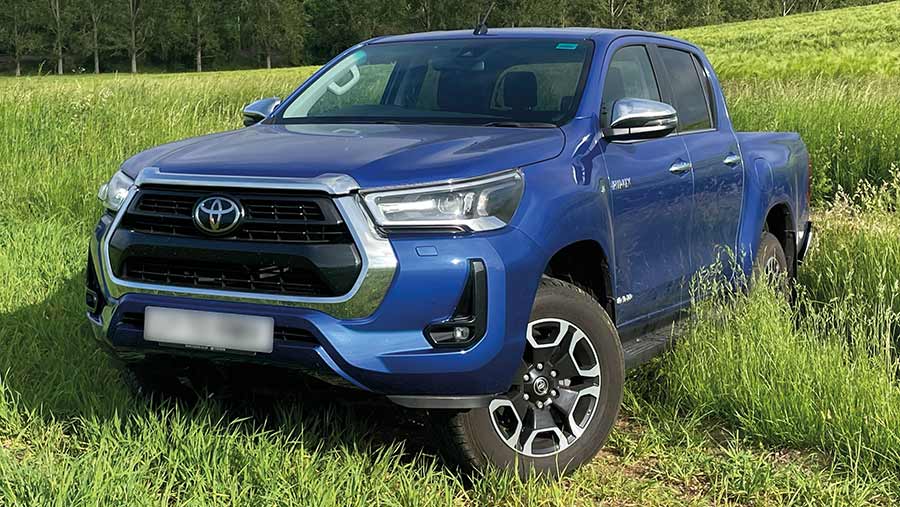 Toyota has deep roots in the pickup market, with the ubiquitous Hilux debuting globally in 1967 and breaking cover in the UK in 1973.

Since then, it has remained a permanent fixture in the list of top-selling models and became a household name when the Top Gear team tried – and failed – to obliterate the fourth-generation model in 2003.

The eighth iteration hit dealer showrooms in 2015 and coincided with the manufacturer passing 18m pickup sales worldwide. And although the relatively recent rise in popularity of the Ford Ranger might have put the Hilux’s nose somewhat out of joint, there are still plenty of farmers with long-standing allegiances to the Far East maker.

Its hand was strengthened by a facelift last summer, which included exterior titivation and interior equipment additions designed to benefit those clocking serious road miles. But the biggest change occurred under the bonnet, where there’s now a 2.8-litre engine available in the two fanciest models – the Invincible and Invincible X.

However, the base-spec Active and mid-ranking Icon still make do with the old 2.4-litre block, which is also an option for the Invincible model if pulling power isn’t a necessity.

Ever since Toyota dropped the 3-litre engine, which remains a sought-after second-hand choice, in 2016, the Hilux has been fitted with a 2.4-litre block.

But while its rivals are making every effort to downsize their oil-burners to keep the right side of emissions limits, the company has bucked the trend by offering a bigger 2.8-litre unit, taken from the Land Cruiser SUV.

It manages to get away with this because emissions limits are averaged out across a manufacturer’s entire range and Toyota offers plenty of ultra-green vehicles, such as the plug-in Prius and Rav4.

The bigger engine delivers a marginally spritelier thrust than that of the 2.4 in the cheaper models. Power now tops out at 201hp, up 53hp versus the old model, while torque has increased by 100Nm to equal the Ford Ranger’s 500Nm. It’s also available from 1,400 to 3,400rpm, and that wide torque band means the auto transmission is less inclined to jump around in search of an easier gear.

The one obvious downside is its pretty dire combined consumption figure of 28.5mpg, which puts it bottom of the pack. It also throws out a smutty 246g/km of carbon dioxide, up from 187g/km on the 2.4-litre.

As for pace, a middling 0-62mph sprint time of 10.7sec falls between the slow D-Max and slick Ranger. It pays the price for unnecessary dawdling between the driver stepping on the gas and the engine winding itself up to 2,000rpm, but feels amply fast once into its stride.

It can get pretty raucous in the cab, but the tone is fuller-bodied at the top of the rev range than the seemingly strained Isuzu powertrain.

There are two transmission options – a six-speed auto and the equivalent manual version. However, torque is seriously hobbled on the latter, down to just 420Nm.

Shifts through the automatic gearbox are slick enough, but it doesn’t offer the refinement of the 10-speed Ranger.

There are no surprises in the cab of the Hilux, which is perfectly serviceable. However, it feels as if it is owed a refresh when compared with the vastly improved D-Max – the last major changes took place way back in 2015.

In particular, the throwback central analogue clock and gated transmission selector would both feel at home in a truck 10 years its junior. The plastics are a bit cheap and scratchy, cloth seats are standard and the tablet-style touchscreen is showing its age.

The second-from-top Invincible spec registers at just over £30,000, and for that you get plenty of bells and whistles, including adaptive cruise control, a reversing camera and keyless entry. 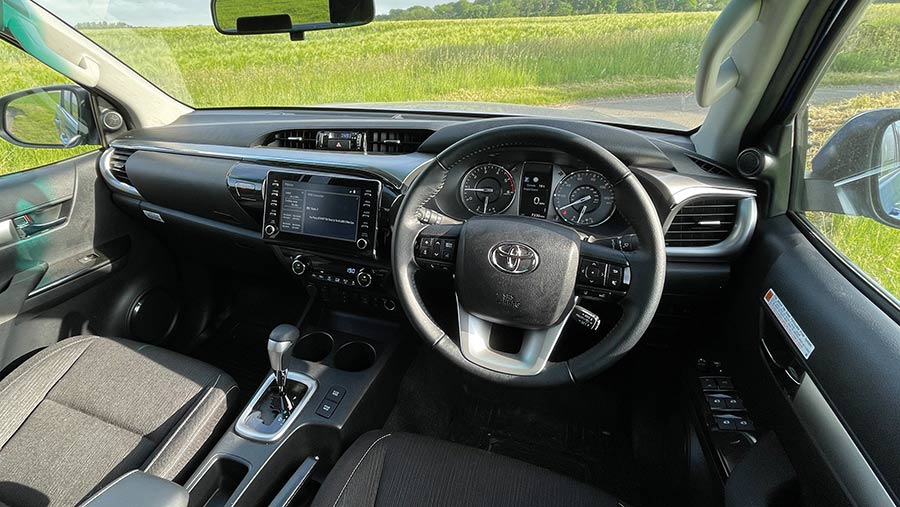 It’s pretty well sorted which, in our eyes, makes it hard to justify the £3,000 jump to the top-of-the-range “X” variant, where a JBL sound system and Toyota’s sat-nav are the pick of the extras. Considering Apple Car Play and Android Auto are available on all but the base-spec Active, there’s little to gain from making the step up. 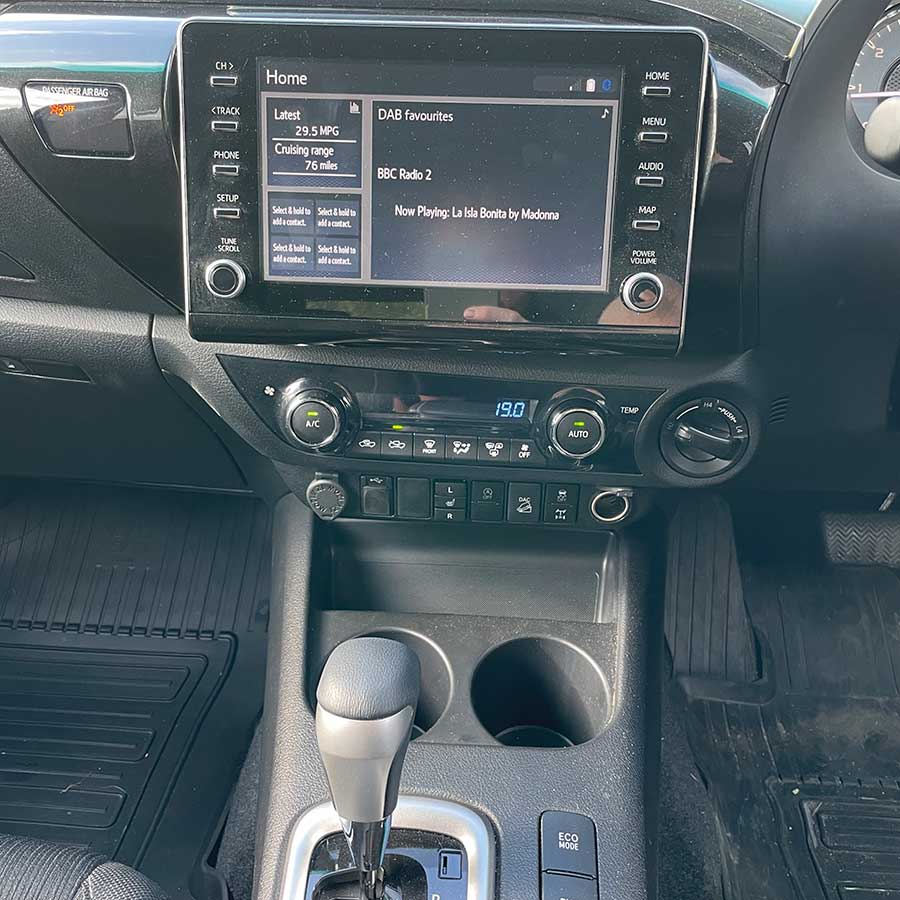 One nice addition is a single air conditioning outlet in the top glove box that is big enough to swallow a water bottle or some sandwiches. Drinks can also be stored in slide-out holders at either end of the dash, which look to have come from the same parts bin as used by Isuzu.

Steering wheel controls are tidily arranged, but don’t include those for cruise control, which are on a separate stub. 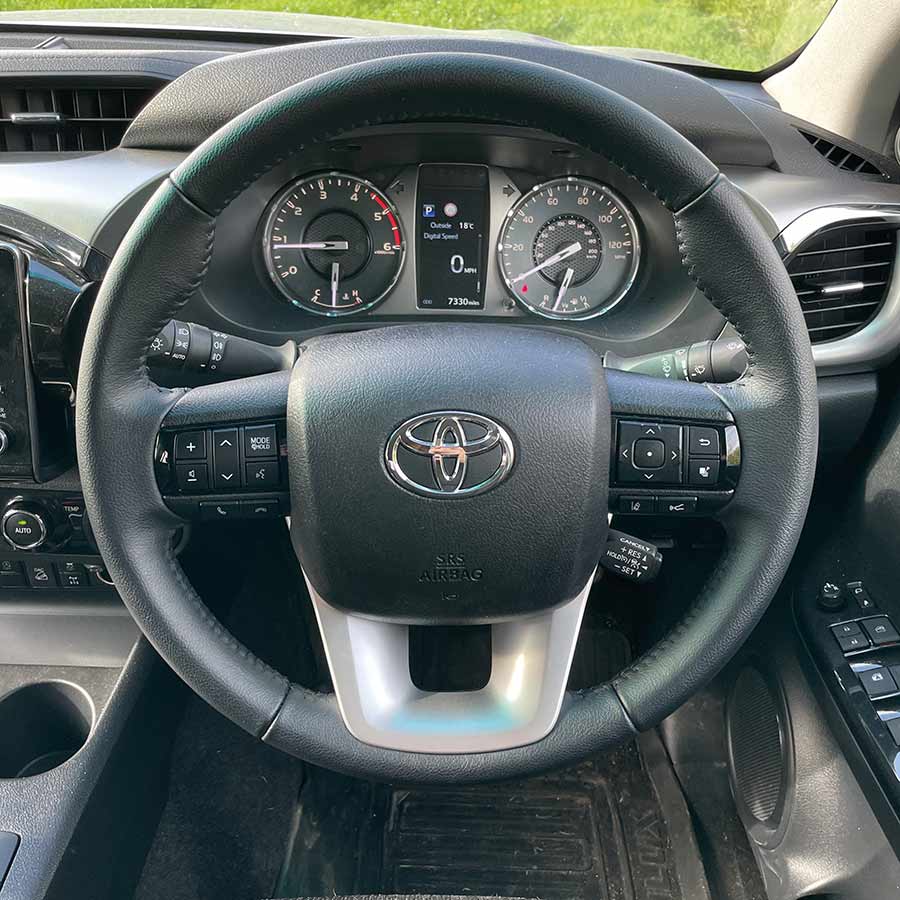 The Hilux’s unladen ride is fidgety, but reasonably well managed, and full-body shivers are less dramatic than in the D-Max, where it is probably helped by the 100kg kerb weight increase over the old model.

The added bulk has also meant losing 100kg of payload – down to an unremarkable 1,015kg – but it’s unlikely to be a deal-breaker given the 3.5t towing capacity is a more valuable asset for most farmers.

The load bed itself trumps its rivals in width and length, but the liner is poorly fitted and – on our model, at least – didn’t have a lip to prevent the paintwork being scratched when slinging materials in. Similarly, the front of the liner doesn’t marry neatly with the tinwork, leaving exposed gaps that will allow water to trickle in and possibly lead to rust after a few years of hard toil. 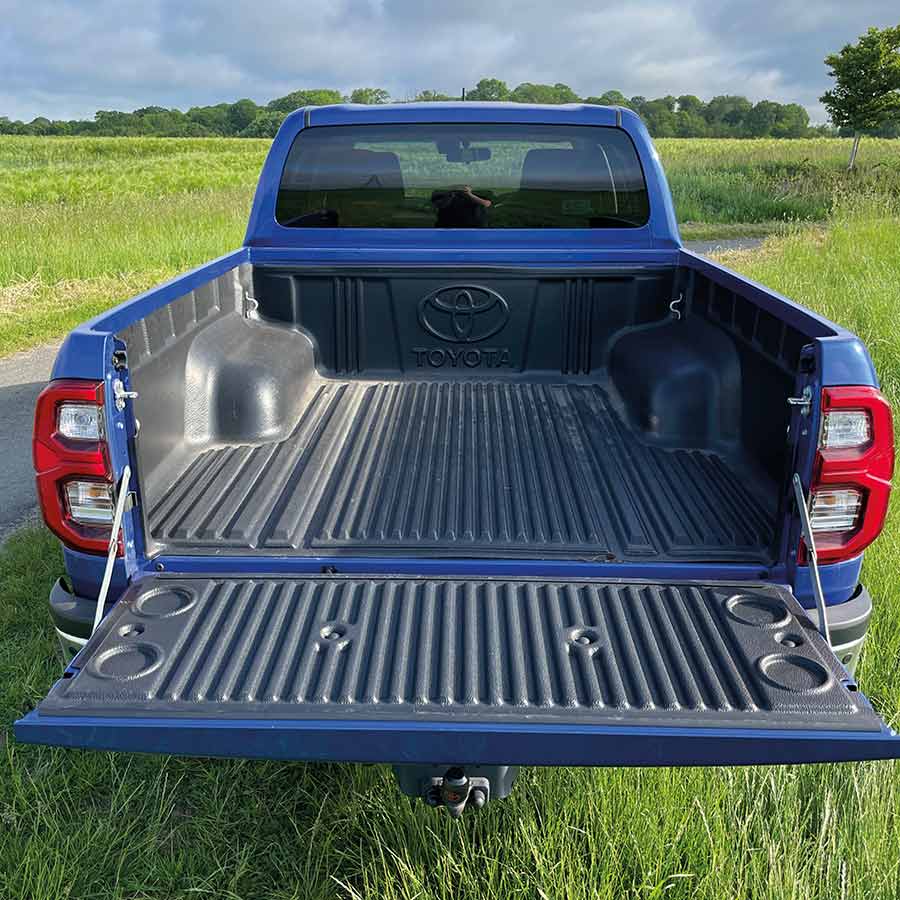 Inadequate lash-down points are also an irritation, and the lack of a tailgate damper is a bit of a shame – particularly given how well-built and heavy it is, which makes it come down with a bit of a thump.

The Hilux is a steady, dependable option that, in all-round performance, falls between the smartly furnished but lesser powered Isuzu D-Max and the faster, slicker Ford Ranger. There is little to dislike, with the big-bored, albeit slightly thirsty, block serving up stacks of torque and a long, wide load bed offering decent carrying capacity.

Folding rear seats leave potentially handy storage space and there are some small pockets underneath the seats for stashing more fragile items.

Underneath, Toyota still offers a locking rear differential in low range. It has still got a part-time four-wheel drive system and no central differential – so can’t match the Land Cruiser in that department.