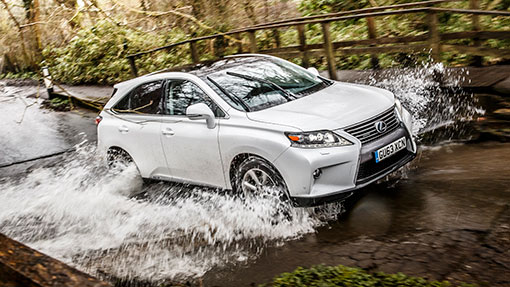 Petrol-electric power might not be the obvious choice for a country car, but Lexus reckons it’s the answer. Oliver Mark put it to the test.

Lexus is the emissions-friendly flag-bearer for the 4×4 world. Courtesy of petrol-electric power, it should be capable of cracking the 45mpg mark on a good run, and the tailpipes will fling out a fraction of the CO2 produced by ozone-destroying rivals in the process.

And, so sure is Toyota’s premium car brand that electric is the answer, that it doesn’t even offer a diesel-engined manifestation of its RX450.

Aside from finding the cash to scribble a near-£50,000 cheque, the decision seems obvious. So, what’s the catch, we wonder?

If 4×4 car classification were based merely on food preferences then a Lexus badge would scream vegetarian.

Its meagre hybrid diet consists of glugs of petrol and the odd injection of electric from a big nickel-hydride battery and two extra motors.

On paper these features make the RX look like the king of 4×4 economy, but after spending a week in it the results didn’t quite live up to our great expectations.

In reality, the car spends a lot of its time as an off-roading imposter. Drive is primarily through the front wheels only, and it is the 246hp V6 that most often provides power.

On occasions when the petrol powerplant falls short, the two electric motors kick into gear and can increase maximum power to 295hp – a 164hp unit shares the front-wheel work, while a 67hp motor drives the back ones.

The unorthodox SUV design doesn’t end at the electric motors, either. The mishmash of power sources drive through a CVT – not exactly a novelty to those running newish tractors, but it can take a bit of getting used to in a car.

Go hard on the throttle and the revs rocket without the car really getting a move on. If you’re prone to putting your foot down then consumption figures will also plummet below the 30mpg mark, and I struggled to get anywhere close to the claimed 45mpg.

Electric-only driving is possible, but only during short, slow moving stints. As soon as you climb above 30mph the engine will fire up, and it’s the same result if you crawl in traffic for anywhere longer than a mile.

Despite the overactive starter motor the starting and stopping of the petrol engine is imperceptible to the driver – it’s only when you hammer the throttle that cabin inhabitants get a vocal reminder of the big petrol lump residing up front. General cruising is eerily quiet and not even wing mirrors shaped like elephants’ ears managed to muster much in the way of noise.

Inside it’s a mixed bag. The finish is generally neat and tidy and the standard spec is generous, but the mundane choice of materials and colours guarantees it the appearance of an on-the-turn lettuce leaf. 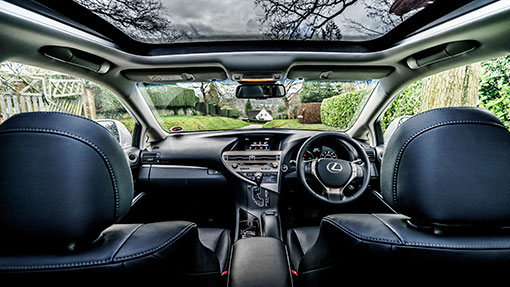 The main control screen is perfectly functional (if a little less glamorous than some of Lexus’ rivals) and the mouse-style control is an inferior version of the rotary dials provided by the likes of BMW.

Elsewhere there’s a dusting of Toyota-like switchgear, most conspicuously with a dash clock that wouldn’t look out of place on a vintage Casio wristwatch.

Space is no problem for those travelling in the front two rows, particularly because there’s no drivetrain to interfere with legroom. However, the RX does come up short on boot space and towing capacity compared with its heavy-hauling rivals.

Lexus isn’t the only manufacturer to be focusing its efforts on combustion engine and electric motor combinations – we’ve already featured Volkswagen and Peugeot’s efforts in Farmers Weekly.

While our experiences have shown few, if any, benefits from a driver’s point of view, your wallet might see things differently.

The low CO2 ratings mean there are serious financial benefits to be had for company car buyers, which might reach several thousand pounds each year. Private buyers can also make smaller savings on the cost of a tax disc compared with diesel-powered alternatives.

However, put the tax savings against the high asking price of the RX and it sours things slightly. For less money you could pick up a top-spec Discovery, Touareg or Mercedes.

Clean but thirsty. Looks good on paper but get it on the road and it’ll struggle to deliver the claimed economy. It’s a car suited to long, steady motorway stints.