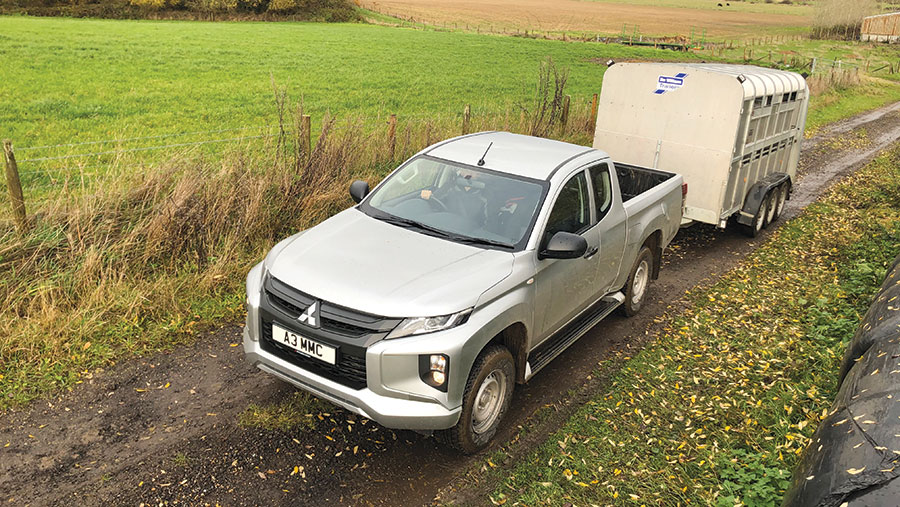 A major redesign of Mitsubishi’s L200 has delivered a stand-out exterior, though whether it has actually improved its looks is debatable.

Base spec 4Life models get a smart cab with enough mod cons for working life. However, usefulness will be diminished for many by the 3.1t towing limit for twin-axle trailers.

There has also been a big drop in peak power and torque so, although it’s comfortable to drive, it doesn’t offer the poke of its predecessor.

Mitsubishi’s series 6 L200 provides a clear illustration of the influence of European emissions legislation and how it negatively affects performance.

The tightening laws have seen a switch to a new 2.3-litre engine rated to an unremarkable 150hp, which is significantly down on the 178hp, 2.4-litre block of the series 5.

At the same time, the truck has got 75kg heavier, so the designers were always battling the laws of physics in delivering a vehicle with spritelier handling.

This may go some way to explaining why Mitsubishi has decided against publishing a 0-62mph figure.

In a bid to counter at least some of the throttle lethargy, the engine is turned to deliver its peak power at lower revs.

The maximum torque of 400Nm is wholly respectable (but down by 30Nm on the retired model) and tends to be reached between 1,750 and 2,250rpm.

The upshot of running a somewhat languid engine is pretty decent fuel economy. Though official stats put it at 37.7mpg – a little way off the standard set by Isuzu’s 1.9-litre D-Max – our test route delivered a frugal 36mpg, bettering the other two machines by some margin.

Another consideration, albeit exceptionally minor, is the addition of an AdBlue system. But, unlike most tractors, the 21-litre tank will last roughly 12,000 miles, which should coincide with the regular service interval.

Despite the strangling of power, the L200 handles road travel confidently. Tyre and wind noise are impressively subdued, and the jittery back end is about as calm as one can expect for a leaf-sprung axle.

Steering is well-weighted at speed – particularly compared with the heavy-wheeled D-Max – but can be hard work during slow car park manoeuvres. It’s also low-geared, which results in tedious amounts of wheel-twizzling when parking.

Before venturing inside, it’s worth commenting on the L200’s pretty extreme exterior makeover. Squinting front lights, squared-off wheel arches and raised LEDs, along with Mitsubishi’s typically excessive use of chrome, combine to deliver a gaudy front end.

It’s supposed to give the truck a bit more road presence and, when combined with alloy wheels and a fancy colour-coded hardtop in top-spec guise, probably does. 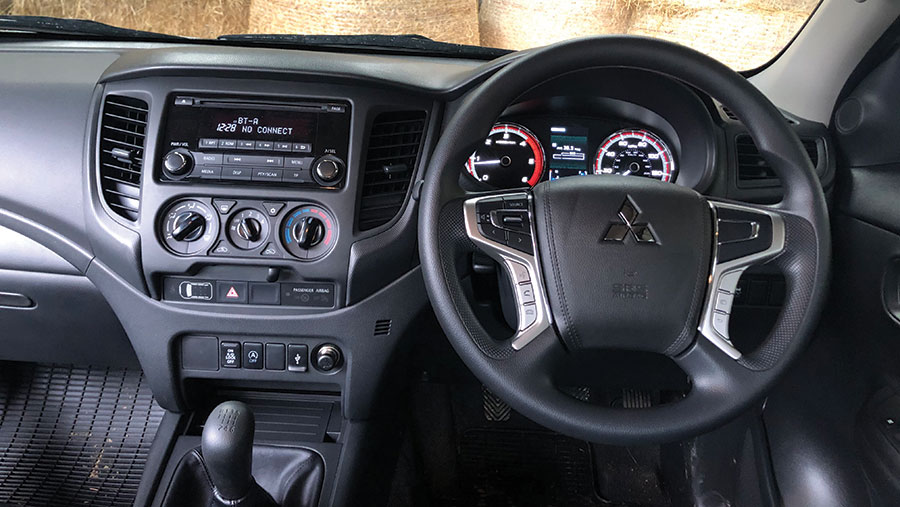 However, the shiny metal and curvy lines marry with the 16in steel wheels like sausages and custard and the end result is indisputably naff.

We had Mitsubishi’s club cab, which is as basic as the L200 now goes after the two-seater was slashed from the price list. It has a rear-hinged door that swings open to reveal fold-down seats.

For those who don’t cart passengers around very often, it forms a useful space to store toolboxes and other high-value or weather-sensitive kit.

Headroom for rear-seat passengers is fine, but legroom has been sacrificed to make a bigger load bed and the seat backs are attached straight to the bulkhead, so are uncomfortably vertical. 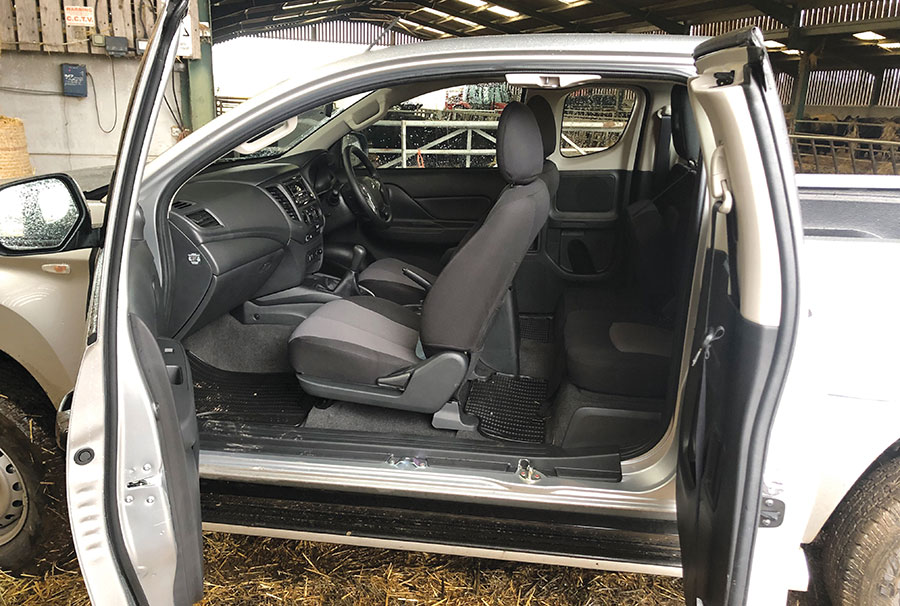 We had the base-spec 4Life model to keep below our £22,000 price limit. Despite being the cheapest model in the L200 range, the interior is actually well finished and it feels relatively plush versus the austere D-Max.

Though the doors feel spookily lightweight and tinny, the materials (predominantly plastic) are solid enough to stand up to the rigours of farming and there is little evidence of the brashness that dominates the exterior.

However, the same shiny plastics would feel a bit cheap in the £32,000 Barbarian X model. Seats are finished with cloth and offer a comfortable driving position, though there’s no raise/lower adjustment for shorties or giants.

The perk of opting for a club cab model is a load bed that is almost 400mm longer than the double cab equivalent. Payload is 1,080kg – about the pickup average – but external lash-down points are non-existent. 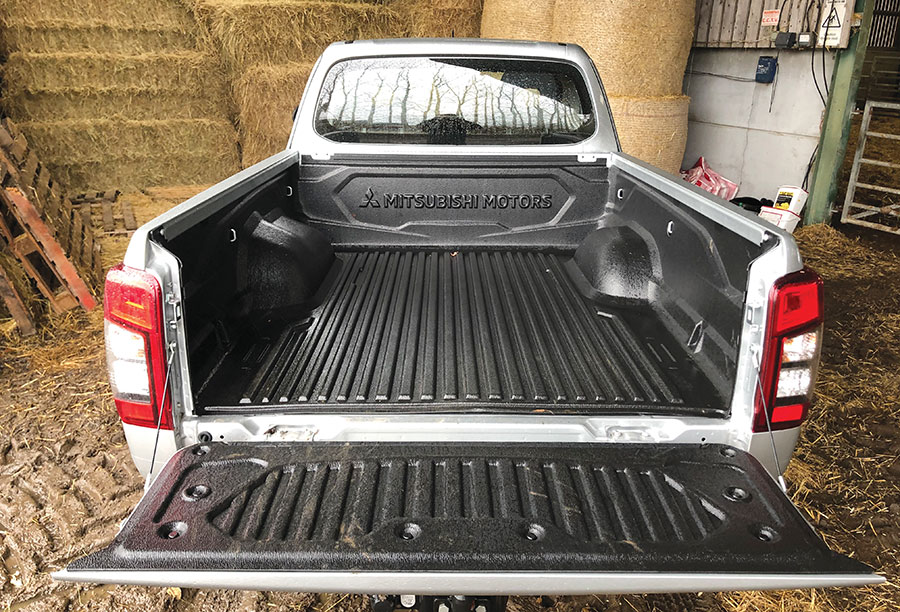 The L200’s other major shortcoming is its rated towing capacity. Though it plasters the fabled 3.5t limit across most of its marketing material, it’s only legal for tri-axle trailers.

Most owners will have a twin-axle flatbed or stock box and, for these, the limit is just 3.1t. That could be a mighty inconvenience if it’s being used for hauling livestock to market.

Low-spec L200s have a slightly simpler, part-time 4×4 arrangement than Warrior and Barbarian models.

The so-called Easy Select system offers three settings: high range in two- and four-wheel drive that can be switched at speeds of under 62mph, and low-range four-wheel drive for high torque and slow speeds. 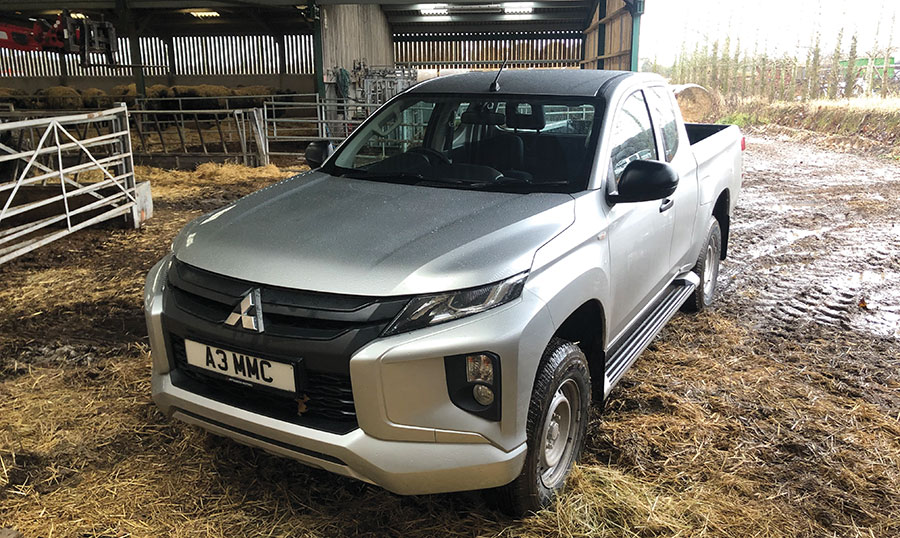 This means there is no unlockable central differential that allows the other models to be driven on the road with four-wheel drive engaged – something that sets plusher L200s apart from most other pickups.

For tricky off-roading, there’s a lockable rear diff engaged by a switch on the dash, which sends power evenly to the rear wheels.

It’s also worth noting that the L200 is one of the shortest and narrowest pickups on the market, which contributes to an enviable 11.8m turning circle. n

The 4Life club cab model forms the first rung in the L200 range, with prices starting from £21,500 and spec extending to 16in steel wheels, air-con, a body-coloured front bumper and manual transmission.

The one-and-a-half-door format offers a bigger load bed than the double cab, which is £1,200 more and adds cruise control and alloy wheels.

Mid-rangers are badged Warriors and start at £27,670. Spec is really ramped up, with cameras, various driving aids and the Super Select four-wheel drive system included.

Barbarian and Barbarian X models, the latter starting at over £32,500, are style-focused, with fancier trim, mood lighting and other frivolities. Surprisingly, these account for roughly 40% of sales.

It’s also worth noting that there is a 62,500-mile cap on the five-year warranty, which is a bit tight compared with most of the competition.