We thought the Hilux was a decent truck, but its shouty, thirsty engine relegated it to the lower end of our test group. The interior was also too chintzy for our liking and legroom for rear passengers was poor.

However, it offered one of the smoothest and quietest rides, had a 3.5t towing capacity and can carry the largest payload of the bunch. It’s a shame, but the king of pickup trucks appears to have lost its way a little. 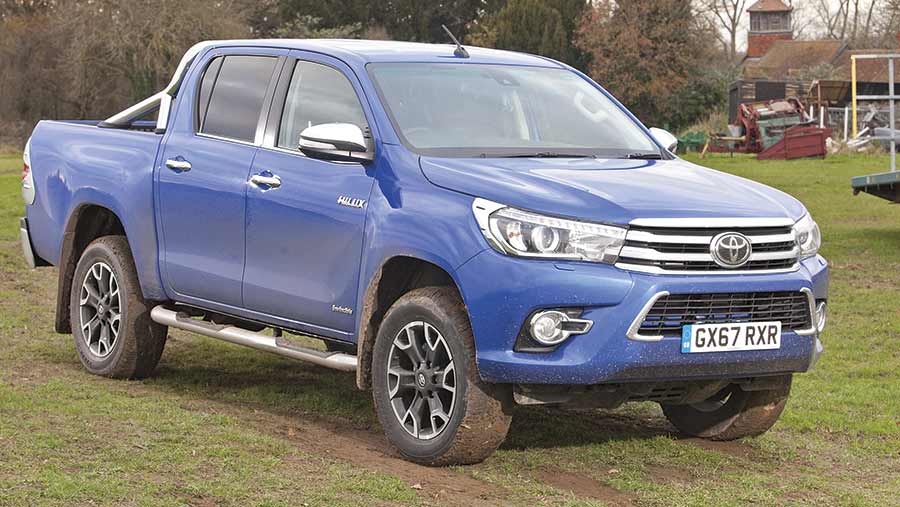 For this latest Hilux, Toyota has ditched its old 3-litre engine and opted for a smaller 2.4-litre block.

According to its press department this develops a good bit more torque than the old lump, but it neglects to mention that power has slid from 161hp to 148hp.

At 400Nm, this torque figure is also below that of all the other trucks on test, apart from the Isuzu D-Max.

When teamed with the six-speed auto box, we found the new engine would let out a rather unpleasant scream under hard acceleration, while delivering fairly lacklustre performance.

However, when a lighter right foot is used it will purr along quite happily and the auto box shifts smoothly through the cogs. 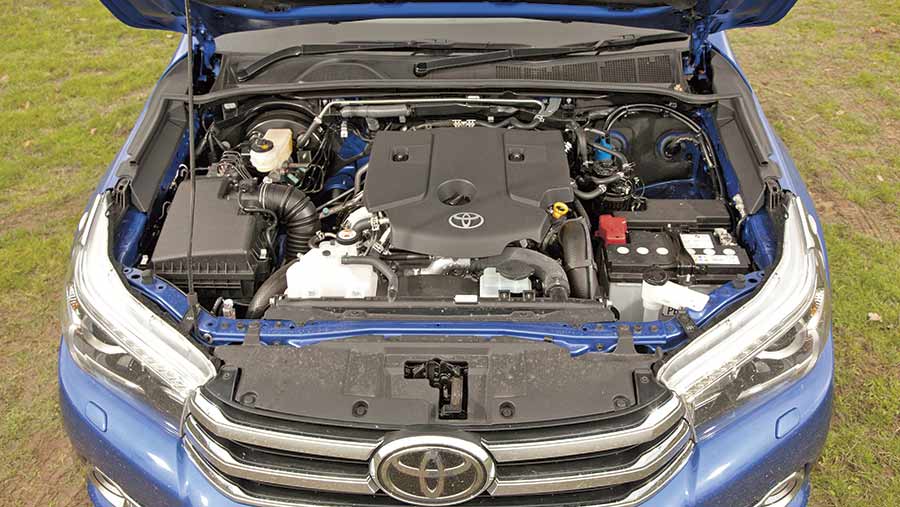 As for performance, Toyota says it gets from 0-62mph in 12.8secs and has a top speed of 106mph, both of which put it in a similar camp to the Isuzu D-Max.

The 1.9-litre engine in that truck has the benefit of best-in-test fuel consumption, though, which the Hilux unfortunately doesn’t.

In fact, it had the lowest score in the group of 28.44mpg. This might only have been a shade lower than the VW Amarok’s result, but that offers a lot more poke for your pounds. Interestingly, Toyota quotes a combined fuel consumption figure of 36.2mpg.

Turning back to the transmission, Toyota has also dropped the manual lever for shifting the transfer box and gone for an electronic switch. This offers the usual combination of two-wheel drive and high- and low-range four-wheel drive.

There’s every extra you could ask for slotted into the Hilux’s interior, but the plastic leather-look trim with faux stitching and random splashes of chrome makes it feel a little bit tacky.

On the plus side, Toyota has done a cracking job of isolating passengers from road and wind noise.

It’s almost spookily quiet in the cabin once the engine has piped down and you start cruising. This is partly down to an electronic system that helps prevent the body pitching and bouncing around.

Other niceties include automatic electric windows all round, a cooled glove box and a 220v socket in the centre console, which would be ideal for charging power tool batteries. 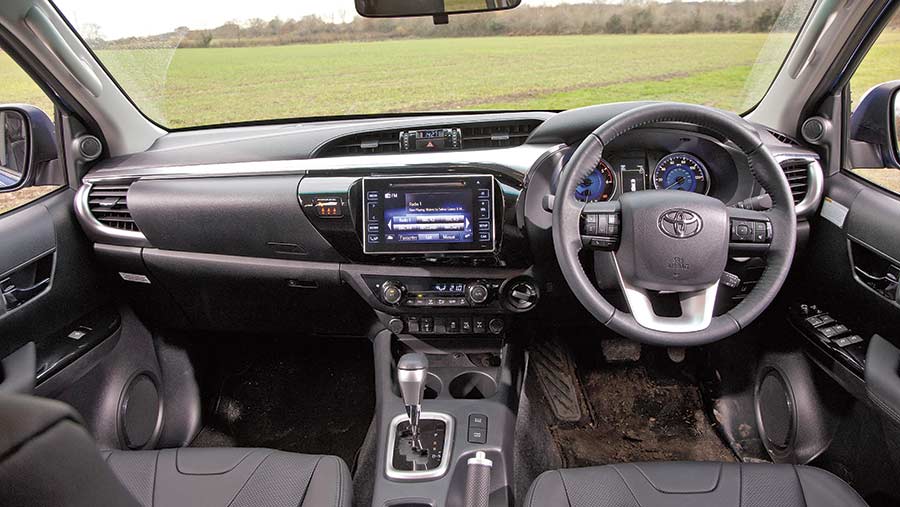 There is also dual-zone climate control and the chunky steering wheel has reach and rake adjustment.

This, the gear lever and seats are also wrapped in good-quality black leather and the seats themselves are pretty comfortable.

However, rear passengers have a bit of a raw deal, with poor legroom and a seating position that is too high to see through the windscreen clearly.

In the entertainment department, Toyota has opted for a tablet-style screen that’s home to a satellite navigation system, DAB radio, Bluetooth smartphone connection and a rear-view camera.

This looks like it has been bolted into the dash as a bit of an afterthought, but works well enough.

The cabin structure has been strengthened, too, and there are seven airbags.

By modifying the chassis, Toyota has managed to bump the Hilux’s towing capacity up to 3.5t, putting it on par with the heaviest towers in the group.

It is also lower, wider and longer than the previous version and can carry the largest payload in our test group at 1,115kg.

To help keep the truck stable when towing, there is also a system called Trailer Sway Control. This senses any sideways movement from the trailer and automatically adjusts the brakes and throttle to counteract it. 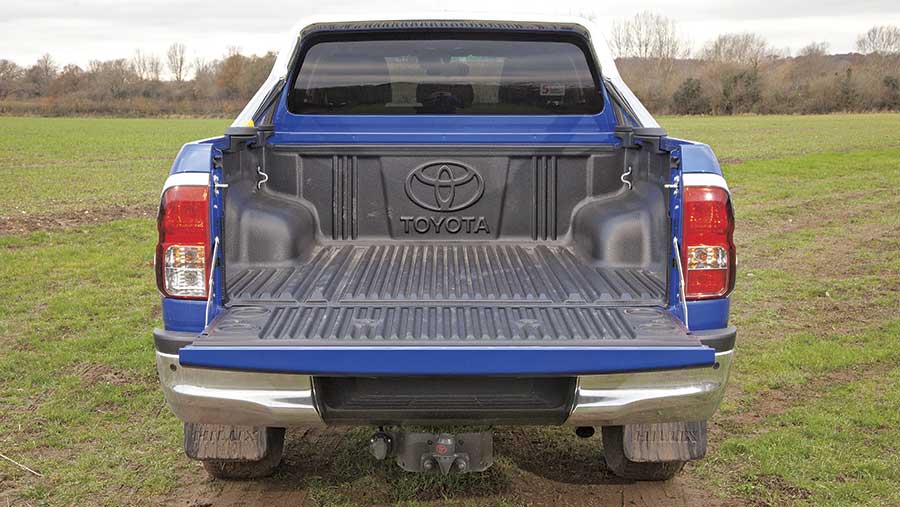 On top of this, there are a host of other safety features fitted, including a collision-avoidance system that will issue warnings of upcoming obstacles and apply the brakes if the driver fails to react. We also like the fact that it will spot road signs and display them on the dash so that you always know the speed limit.

As for its off-road performance, there is a limited-slip rear diff, complete with diff-lock and an active traction control system to help get the power to where it’s needed.

It also has systems to help you start off on a hill and make sure you stay in control when going back down them.

Sticking with the 2.4-litre dci engine in all its pickups, which offers 150hp across the board, Toyota has four spec options, with the very budget-looking Active at the bottom of the pile offering a manual gearbox only.

The more appealing Icon gets colour-coded bumpers, a 7in touchscreen and a bit more street cred, although it does cost the thick end of £5,000 more.

The top two models are the Invincible and Invincible X, with the latter getting satnav and parking sensors all round.

However, with our fully loaded test model coming in at £37,330 (inc VAT), the slightly more expensive Amarok offers much more refinement and V6 lump, while the Ranger can offer the equivalent 3,500kg towing capacity and the power of a 3.2-litre engine.