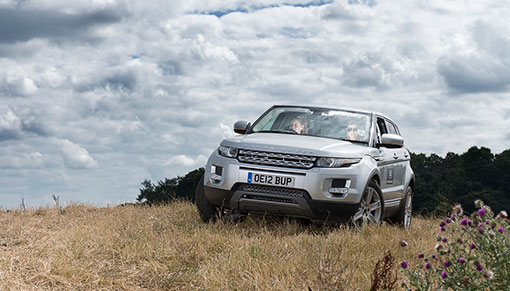 It’s still got that glinting Range Rover badge up front, sits you high enough to look down on most people in rush hour traffic and has all the off-road dials you’ll ever need should the road turn rough.

Everything about it is distinctly Range Rover, so why don’t I feel quite like the cat that’s got the cream when I drive around town in it? And why does my girlfriend insist on doing the driving?

The answers to both of these, and other, ponderous questions became clear after a week in the Evoque, which has shot the Range Rover design mould to bits. It’s more sporty, more manoeuvrable and slightly more girly than anything the company has conjured up before.

The Evoque’s looks are an almost exact reflection of the first concept car. That’s a good thing – it’s about time we had something that doesn’t follow the bland and unadventurous SUV design – but in doing so it pretty much guarantees it won’t be to everyone’s taste.

Nothing radical has ever been universally loved – Liverpool’s 1996 cup final suits and that weird 80s combination of skinny jeans with big Dr Martens boots are two that spring to mind.

Nevertheless, it still shares plenty in common with its bigger brother. That’s a massive selling point, but it also means you can feel a little short changed when it comes to space.

It still competes amply with other cars in its class and there’s a surprising amount of legroom in the rear, but these SUVs are make-do family cars and if you’re regularly hauling around more than four people you might want to look at something bigger.

The interior finish betters almost all of its rivals and the dash layout is surprisingly simple, despite entry-level models still getting a touchscreen, climate control and heated seats as standard. A big glass roof semi-compensates for the tiny side windows, but there’s no solution to the letterbox-sized rear window.

There are two diesels in the line-up. We tested the 148hp version, but there’s a bigger 187hp that uses the same 2.2-litre oil burner. There’s also a 2-litre, 247-horse motor, but it slurps rather than sips from its petrol tank so isn’t really going to be an option for most buyers.

The smaller diesel has more than enough power for dropping the kids to the gates of their private school before lunching at some snazzy suburban brasserie (and anything else appropriately middle class).

It’s more efficient than the bigger one, too, and has plenty of bite at low revs. But if you’re in the market for a tow car, and hell bent on it being an Evoque, you’ll want the bigger diesel. Realistically, there are plenty of better candidates in the Land Rover line-up for that sort of thing.

The Evoque’s forte is road-going. It buzzes along effortlessly at cruising speeds and, for buyers that eat up the road miles, it beats the extinction-bound Freelander hands down.

Last year Range Rover gave the Evoque a ZF nine-speed automatic gearbox. We’ve already seen it in the full fat Rangey, so we stuck with the six-speed manual.

Foot to the floor it’ll pace up to 115mph and during a week of steady driving we tallied 33mpg.

Handling is quick, responsive and everything you wouldn’t have expected from a 4×4 a few years ago and adaptive dampers keep body roll in check around corners.

Oversized wing mirrors provoke a bit of wind noise but it’s fairly harmless given the rest of the car is so quiet. Our entry level Pure model was on more comfortable 18in rims, too – full marks for function, less so for fashion.

The fact that the new Range Rover Sport looks more like the Evoque says all you need to know. It has already waltzed its way to number one in the Land Rover sales charts and the recipe for success is now obvious – take the full fat Rangey, slim it down and sprinkle it with Land Rover goodies.But it’s an acquired taste – my girlfriend has acquired it, I haven’t. Yet.