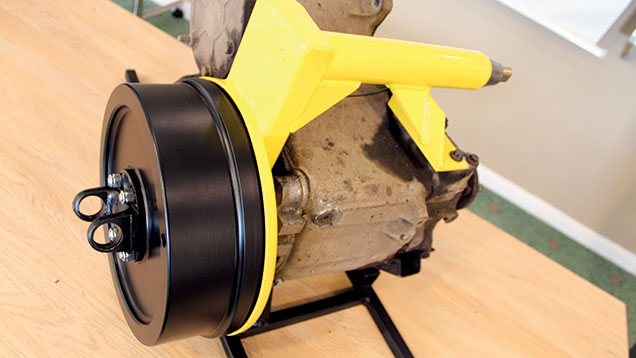 A Lincolnshire Land Rover engineer has built a tough mechanical security device that makes 4x4s and a host of other vehicles much harder to pilfer.

Called the Rat Trap, it locks the vehicle’s transmission solid with the turn of a key, meaning it can’t be hot-wired, pushed or even towed away. There are no motors, wires or cables involved and the whole thing is hewn out of thick steel plate.

See also: Getting the best from a second-hand Land Rover Defender

It is hard to get to as well, tucked under the seat box or transfer box. That means it is almost impossible to remove without getting the vehicle over a pit or on a ramp. Even then it would take a couple of hours to shift, says inventor Andrew Poulson.

They specialise in Land Rover repairs, restorations and conversions, but will carry out work on almost any vehicle. They also do some fabrication, offer mobile welding services and invent products.

One of their most recent projects was to install a six-cylinder, 5.9-litre Cummins diesel in a Land Rover Defender.

Thieves are then only left with loud and attention-grabbing tactics such as dragging it with the tyres squealing, chopping though the prop shafts or craning it on to a low loader.

“Thieves tend to go for Land Rovers because they are such an easy target,” he says. “The Rat Trap makes their life much more difficult, so they’re likely to look elsewhere.”

Mr Poulson came up with the design after a spate of Land Rover thefts in the area. A number of his customers had had their vehicles stolen, despite being fitted with off-the-shelf security devices such as steering wheel and pedal locks.

Fed up, they asked him to build a more robust alternative. After a bit of head scratching and plenty of hours in the workshop, he came up with the Rat Trap. It sits behind the output flange of the transfer box and has a ratchet mechanism that can be locked by turning a key just underneath the driver’s seat.

For added security, it has a protected barrel that will lock solid if anyone tries to tamper with it. Mr Poulson already has a UK patent for the design, with a worldwide patent pending.

Initially the Rat Trap will be available for 200 and 300 Tdi Land Rover Defenders, but it can be adapted to fit on almost any vehicle or trailer, including tractors, HGVs and stockboxes, he says.

The Land Rover Defender version will cost £590 plus VAT and takes about two hours to fit for someone that knows what they’re doing. It is a bolt-on kit, so there is no welding involved, but the fitter does need to cut a small hole in the seat box for the lock barrel to stick through.

The Rat Trap comes with a 10-year guarantee and Mr Poulson is in talks with major insurance companies to get discounted premiums for vehicles fitted with the device. The first units will go on sale in mid December.