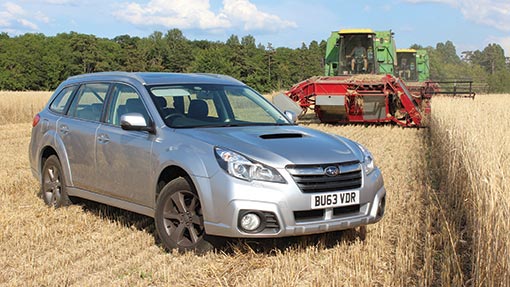 No car brand in the world can claim to have hard-core fans quite as diverse as Subaru’s motley crew of fanatics.

While burberry-cap-wearing 20-somethings sit outside Basingstoke Bowlplex in their souped-up Subaru Imprezas, a very different type of buyer has their Outback estate half-wedged in a holly bush while walking a load of smelly Labradors round the local common at 6am.

This dog walkers’ Mecca is the habitual stomping ground of the Outback – a tough estate car with little interest in fashion. It’s the sort to wear unbranded, woollen jumpers, do its food shopping at Aldi and have a shoe rack that contains only hiking boots and wellies.

Subaru has recently made an effort to carve new, more exciting shapes into its uninspiring tinwork, but it remains one of the world’s most aesthetically average estate cars.

The Outback has grown wider, longer and taller than its forerunner, which has obvious advantages for wider-waisted and longer-legged passengers.

An old-school centre console separates those in the front row, while the dash is wallpapered with tough, plain plastics. A small, squint-inducing screen for the reversing camera breaks up the boringness, but unfortunately that is its sole purpose – there’s still no touchscreen entertainment system.

Under the driver’s nose things are a little classier. There are well-lit instrument clusters and the steering wheel is riddled with controls but, even with these, the Outback finds it difficult to compete with German rivals on the quality front.

Things aren’t particularly rosy for those relegated to the second row, either. Leg space is generous but air outlets aren’t – three sweaty six-footers moaned all the way to France about the scarcity of fresh air and the less comfortable seats. It became obvious that the middle seat was to be avoided at all costs.

There’s less to complain about in the engine department. For a long time petrol power was the only option and immediately alienated heaps of potential buyers, however, the designers have finally sorted a diesel motor for the latest models.

Subaru’s novel boxer engine, first introduced in 2008, buzzes along with a distinctive hum (and a bit of a clatter at idle). Some of the noise can be heard in the cabin but the more obtrusive racket comes from the tyres on the road.

In the case of our test car, the 2.0-litre powerplant drives through a Lineartronic CVT transmission. Although commonplace on the new tractor market, stepless gearboxes are still a bit of a novelty for production cars and usually prove a bit of a compromise. However, Subaru’s set-up is significantly better than others we’ve tested including the Lexus RX450h.

The Outback’s CVT uses a chain drive rather than a belt to transfer torque between pulleys. Whizzy electronics also create six manuals steps in the CVT range, which you can flick between using the stick-shifter.

And while a heavy right boot on the throttle sends the Lexus’ engine yapping like an angry chihuahua, the Outback manages to keep a lid on things and the revs hover around the 2,500rpm mark. There’s still a bit of delay before it decides to get moving but it’s considerably better than its less refined rivals.

You can still pick up an Outback with a manual gearbox but, curiously, by-the-book figures suggest it will achieve exactly the same fuel economy – 45mpg. We found real-life results closer to 35mpg, which leaves it a country mile from rivals such as the VW Passat, which can return figures closer to 55mpg.

There’s no doubting Subaru makes a solid off-roader – one look at its world rally record will tell you that. The all-steel underbelly offers near-bulletproof protection from rocks, ruts and harvest stubbles and four-wheel drive is standard fitment.

The relatively low centre of gravity also helps it hug the ground and the steering is well weighted, although tight roundabouts can cause it to pitch and yaw too much.

The Outback is a solid and practical performer. We like the tough-to-break design, but the price puts it in a competitive marketplace. Offers way more than an average SUV, too.