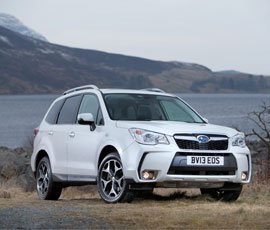 Subaru might have made its name in gas-guzzling performance cars such as the Impreza, but the quirky Japanese firm’s bread and butter now comes in the form of practical SUVs.

The fourth version of Subaru’s biggest seller – the Forester – might not be the motor of choice for badge-conscious buyers, but the company reckons this latest one is the most practical and, without rocking the ship of hardened Subaru fans too much, the best-looking as well.

To find out we headed north, picking the cars up from Teesside and following a route that wound over the still-snowy peaks of the Pennines to Lake Windermere.

We made the westwards trip with the top-spec turbocharged petrol. It boots out 240hp from its boxer-style four-pot, but there’s a 150hp petrol or 147hp diesel if you’re not in the market for something quite so brutish.

One bonus of Subaru’s trademark engine is that it can be mounted low down, keeping overall vehicle weight close to terra firma to improve handling. Indeed, the Forester clung impressively to the ribbons of tarmac through tight chicanes of drystone walls and over the odd rumbling cattle grid despite the steering lacking weight and feel.

The range-topper comes teamed with Subaru’s Lineartronic CVT as standard. No gear changes, velvety acceleration and ghost-like silence from the petrol motor mean you’re cocooned in another world. It’s also seriously rapid – 7.2sec to reach 62mph makes it the Usain Bolt of the SUV world.

If you miss the satisfying clu-clunk and rev change sound of a gearbox then you can knock the stick into manual. Here six preset transmission speeds simulate gears. There’s a second mode – called S# [yes, it’s actually a hash] – that provides eight ratios if you want to ping up and down the gears more quickly.

Half way to Windermere we snuck off-piste. For squirming around on the slippery stuff there’s only one winner – the CVT’s gimmicky-sounding X-mode. Thwack the centre console button to engage all sorts of off-road jiggery-pokery including hill descent control and traction improvements.

The manual gearbox falls a little short in the off-road department – there are no driver aids and no low box. Reliance, instead, falls on Subaru’s symmetrical all-wheel drive, which directs drive to the wheels with the most grip.

On the return leg to Teesside we took the diesel version. Sure, it has a little less fire in its belly and you have to make do with a six-speed manual, but it’s torquey enough to accelerate in sixth and there’s plenty of speed in each gear provided you’re generous with the throttle.

The diesel is predictably noisy during acceleration but it settles down on motorway runs. Plus, fuel economy is on your side if you opt for the diesel- up to 49.6mpg compared with 33.2mpg on the heavy horsepowered petrol.

Rugged would be an apt adjective for the interior. Six trim levels are on offer, all with plenty of scratchy plastics. It looks workaday but should stand up to mucky paws and oily trousers far better than triple-stitched leather.

You shouldn’t be short of space, either. It has bulked out since 2008 – sprouting 2mm upwards, 15mm outwards and 35mm long-ways. Boot space is also up by 12% to 505 litres, so dog walkers (one of the Forester’s target markets) should be able to fit in an extra Labrador.

Exterior changes are restrained rather than revolutionary. It has lost a bit of its loveable ugliness – the ’90s air scoop has been given the chop and a scalpel has been taken to its rump. The standard model is now a little characterless, although the range-topper’s fake air intakes and 18in alloys are a bit tastier.

Generic looks, unusual engine and a plastic interior hardly sound like the recipe for success, but it’s just the ticket for rural life.

The Forester might be unfortunate enough to come under the SUV umbrella, but it’s far more capable of roughing it than the Mitsubishi Outlander and Honda CR-V – two that have been earmarked as potential rivals.

It’s a competitive market, though, so it will be difficult for a niche brand such as Subaru to coax in many new buyers.