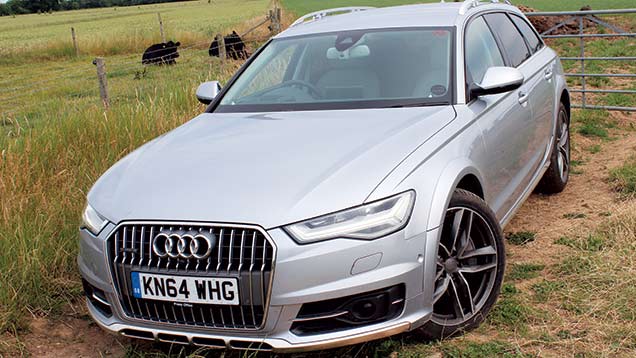 You can buy a perfectly good house for the price of the Audi A6 featured in this edition of Country Car. Surely it can’t be worth every penny of £80,000, can it? Oliver Mark decides.

Audi has chosen to pitch its latest A6 Allroad to compete, financially speaking, with both a base spec Range Rover and a pretty Welsh cottage.

At first glance it seems an unfeasibly large price-tag for an estate car that, from the outside, doesn’t look a whole lot different to a Skoda. It comes in £10,000 more than the standard A6 Avant too, with only a few off-roady bits and pieces to set them apart.

What do you get for your money?

While the exterior is rather conservative in nature, the inside is all about five-star furnishings. There’s only one spec level, so a touch of self-discipline is required to avoid squandering all your inheritance money on unnecessary extras.

By the book: Audi A6 Allroad

The most extravagant of those is the Bang and Olufsen sound system that, at six-and-a-bit grand, is only afforded by Saudi princes and lottery winners. You can scribble another £1,200 cheque if you find massaging seats equally irresistible.

Likely to be of more appeal to the average buyer is the £3,500 package that includes adaptive cruise control, sat nav and a clutch of other driving aids. The head-up display that shows your speed and navigation on the windscreen isn’t included in that price but, at £1,240, might be worth the cash if you’ve got a habit of picking up speeding tickets.

The rest of Audi’s fixtures and fittings reflect interior design at its best. Space is no issue no matter which seat you take, and the boot is equally enormous and comes with net and rail systems to hold loose items in place.

How does it drive?

The flagship Allroad gets a beefed-up eight speeder to cope with the extra power hurled from the 320hp block. There’s simply too much torque for the traditional seven-speed ‘box to handle.

The characteristics of the gearbox and inflation of the five-stage suspension can be adjusted through various driving styles. Efficient mode – the most frugal of those – shouts motorway cruising, while dynamic is the one to pick for twisting and turning through Swiss mountain roads.

Cabin is interior design at its best

Allroad mode prepares it for a rougher ride, pumping up the pillows by 35mm to avoid the worst of terra firma’s lumps and bumps. There’s also a stainless steel underbelly to protect its vital organs, but no low box means you’ll never get close to pushing a Defender, or Range Rover for that matter, off the green lanes.

If common sense prevails then you’ll be taking one of the three diesel options. Every oil-burning model gets a 3-litre V6, but it’ll be your wallet that decides how much muscle comes with it. The top dog gets an extra turbo over the rest of the pack, which takes power output to the 320-horse mark.

The force from the engine means there’s tonnes of low-end torque, and the twin-turboed lump produces an almost addictive gurgle from the engine thanks to some crafty Audi acoustics. You can even tweak the sound it makes through the in-cab screen to avoid upsetting grannies as you whizz through serene Surrey villages.

Unfortunately the biggest – and quickest – version has an appetite to match. The finely-tuned block will get through 40mpg if you’re careful, while the comparatively modest 200hp one will return roughly 45mpg.

The Allroad has few, if any, genuine rivals. In fact, the most obvious opposition comes from Range Rover’s stable.

Our test car was sickeningly expensive, but that can be remedied in part by avoiding the options list. It would bring the asking price closer to £50,000, and you could save a load more cash by doing away with the Allroad badge altogether and sticking with the standard A6 Quattro.

Either way you’ll end up with a great car and, with strong residuals on your side, should stand a chance of getting a chunk of that back when you come to sell it.