As much as the culling of Land Rover’s Defender was a shrewd move for a global car manufacturer that lives and dies by profit figures, it was a sad indictment of the modern four-wheel drive market.

Our appetite for cars that offer genuine character at the expense of comfort, speed or luxury has all but gone.

We are now left with only one rebel on the mass market – the Jeep Wrangler – which has been abandoned to do lonely battle with the throngs of lightweight soft-roaders. 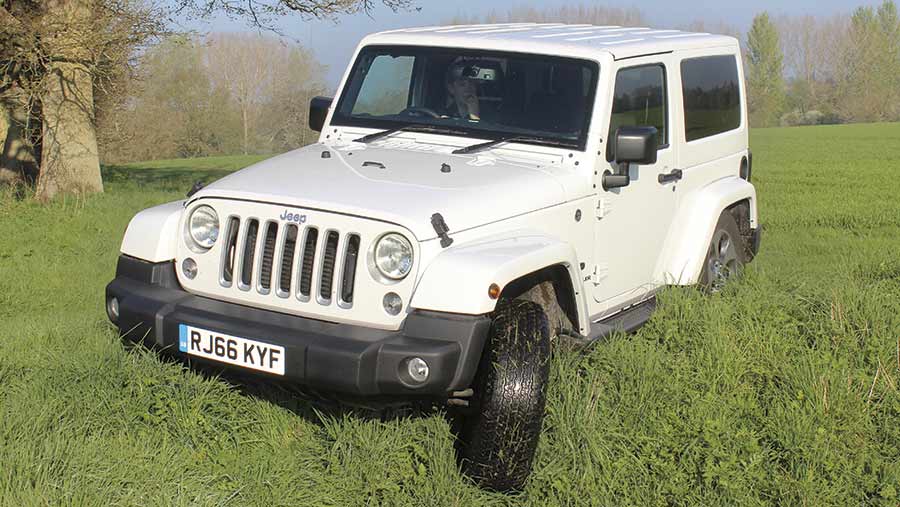 So, is the US equivalent of the iconic Defender the SUV antidote we’ve all been craving?

Its tank-like build will certainly appeal to anyone with eccentric taste. It harks back to the Second World War days of the Willys Jeep – a time when aerodynamic qualities were unimportant, but big-bored engines were a must.

Of course, the boxy build and big block guarantee fuel bills to make the thriftiest farmers wince, but they also offer unrivalled off-roading ability and ultimately, a much-needed dollop of 4×4 charm.

Wrangler sales in western Europe have long been strangled by the fact they were only available with huge petrol engines that require a Saudi bank balance to keep running.

However, the introduction of a diesel has widened the appeal this side of the Atlantic.

The new block is still a greedy guts where diesel is concerned, but it is cheaper to run than before and the ride is harsh enough to put you off clocking up too many miles, anyway.

Officially, the combined cycle will get you 31mpg (pretty poor by anybody’s standards), but after a week of mixed driving and lots of diesel stops we scored well below that.

Being fitted with a 200hp powerplant actually makes it pretty swift out of the blocks. Its 10.6sec 0-62mph time is far from embarrassing, though it does tend to run out of puff and requires a lot of concentration to pilot at high speeds.

Noise also becomes a problem as the needle heads towards the red line and the dulcet tones of Bob Harris Country drift out of earshot at about the 4,000rpm mark.

It bungles its way from cog to cog in a lumpy fashion and the general on-road experience isn’t much different to the Defender, which is famed for its crudeness.

In reality, all the compromises made to keep the Wrangler a master off the road really hobble it on the asphalt. The steering is low-geared and slow and the suspension is seriously bouncy, neither of which lends itself to a cruisy travelling experience.

The driving position also takes some getting used to. There is no question of comfort, but the brake pedal hovers far higher than the throttle and can be difficult to find in a hurry.

There’s nothing to match the wacky looks of the Wrangler, though white isn’t the colour we’d pick for our £34,000.

We had the two-door model in Overland spec, which comes garnished with leather upholstery, heated front seats and Fiat’s unremarkable infotainment system. It also has a safari-style three-piece hard-top that can be removed if the weather is half-decent.

Wave a few extra grand under the nose of the salesman and you can get the four-door model that has an extended wheelbase to accommodate more passengers.

The set of 17in alloys is wrapped with huge, high-sided tyres, which look built for trekking through the wildernesses of Iceland. Grip is second to none, but the chunky rubber stirs up a load of noise on the road.

Quality standards are also high. Interior plastics, for once, are thick and hard-wearing and those who bagsy the front seats will find little room for complaint.

The 6.5in touchscreen is a letdown, though. It still requires a road name to accompany the postcode, which is a real pain, and connecting the phone to Bluetooth can turn into a palaver, too.

On the plus side, Overland models come with an Alpine audio system, which includes a big subwoofer in the boot.

In fact, that’s about all there is space for behind the rear pews, so don’t expect too much when you swing open the split back door. 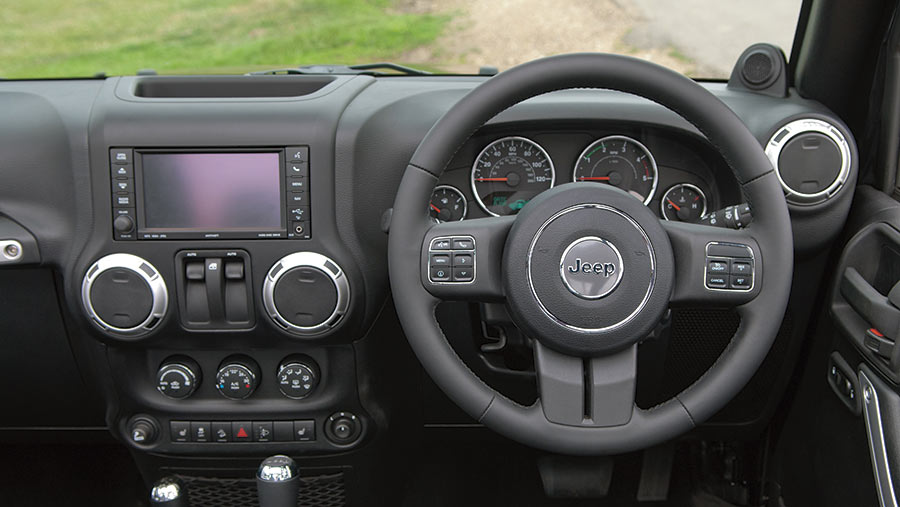 Now we’re in the Wrangler’s domain. Short overhands front and back are built for negotiating Everest-like slopes, and the chunky footwear will find traction where others can’t.

It feels reassuringly mechanical – even the low-range ‘box is locked in via a long lever on the centre console – and stacks of torque at lower engine speeds lends itself to gritted-teeth driving. The ground clearance is also better than almost all of its rivals.

Throw in to the mix some super-flexible axle articulation and a big front bumper and there’s not much that will stop the Wrangler in its tracks.

Let’s be honest, you would be a loony to buy something with the aerodynamics of a greenhouse, thirsty engine and five-speed gearbox for regular commuting.

However, that’s not what the Wrangler is about.

While every sensible bone in your body is screaming not to buy one, there is something quite alluring about Jeep’s rugged charm. Add that to the fact it is more comfortable than the Defender – farming’s favourite 4×4 – and you can start to put together a genuine argument for buying one.

It costs a lot of money and won’t hang on to its value anything nearly as well as the Land Rover, but don’t let that put you off…