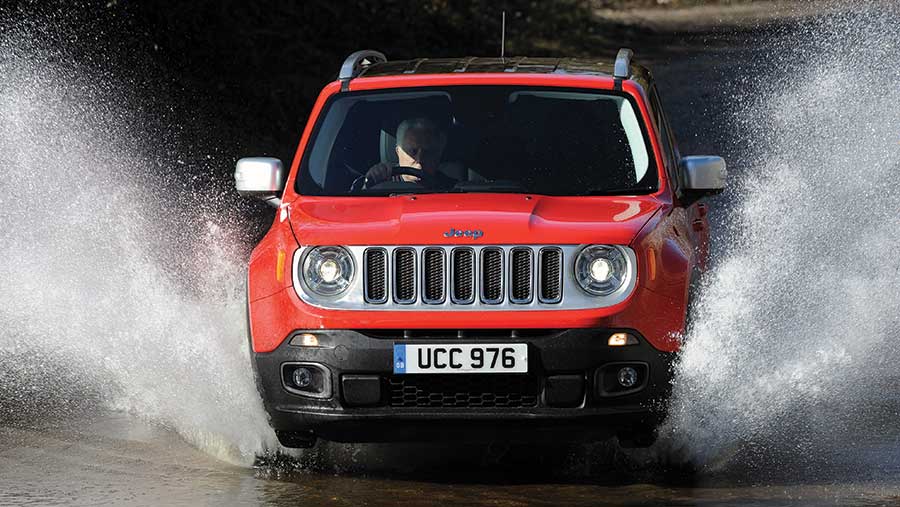 The lucrative SUV market has sucked in its latest victim, with American giant Jeep the most recent to find the money-spinning, soft-roader segment all too difficult to resist.

However, unlike most of its opponents, Jeep has some stellar 4×4 heritage in its locker. The designers have made the most of it, digging deep into the archives to add a sprinkling of Willys Jeep nostalgia to the newbie.

Spec it right and the mould-breaking Renegade will also come with most of the tools necessary for plodding knee-deep through the brown stuff, all in a small, manoeuvrable package.

In a word: ugly. And if you’re easily embarrassed it’s certainly worth swerving the lurid orange livery.

But then there’s something endearingly loveable about the Renegade’s boxy shape, which isn’t dissimilar to the Yeti – one of its fiercest 4×4 rivals.

What it loses in looks, it gains in character, and that undoubtedly sets it apart from the unadventurous curves of the Nissan Qashai and its SUV cronies.

What about the inside?

The Renegade’s four-door shell is pretty small, but there are perks to that square shape.

There is ample headroom across both rows, but unfortunately for those that lose rock, paper, scissors, second-row leg space is limited. It means long-haul trips feel like a chore, and are not helped by the short, hard seat bases.

The novelty mud splats over the rev counter are a bit tacky, as is the “since 1941” scribble across the top of the touchscreen, but it all adds to the Renegade’s fun side.

In total there are four different specs to suit budgets big and small. Things kick-off a whisker above £17,000, for which you’ll get a six-cog manual with two-wheel drive and the bare driving essentials.

Stretch north of £28,000 and drive heads out of all four wheels from a slick nine-speed box. A DAB radio, air-con and alloy wheels are included on all models, but cruise control sneaks in further up the range, along with touchscreen controls and heated seats.

A bagful of engine combinations aims to catch the eye of all potential SUV shoppers. If your preference is for petrol power then there’s the choice of a 110hp 1.6-litre block, or a 1.4-litre tuned to deliver 140hp or 170hp.

Oil-burning equivalents dish out similar stats. The 1.6-litre will throw out 120hp, while a bigger 2.0-litre lump provides the same 140hp and 170hp but in diesel form.

Naturally, the small diesels paired to two-wheel drive axles deliver penny-pinching economy figures that can reach up to 60mpg. Back in the realms of reality that figure is likely to be closer to 50mpg, which still represents a respectable result for the Renegade.

Our chariot for the week was the 1.6-litre diesel. A package not built for exhilaration and excitement, you might assume, but the go-kart-like results were quite to the contrary.

Determined and punchy at low revs – just as a diesel should be – that gritty resolve gets it out of the blocks quicker than expected and will have the driver notching through gears with satisfying regularity.

The blocky body and big wing mirrors stir up wind noise at speed, though the chassis remains surprisingly balanced no matter how rippled the ribbons of country road are. The only catch is the firm ride – good on the road but rough as rats off it.

Big bucks will land you the top-spec Trailhawk – a diesel-powered nine-speed automatic with all the bells and whistles.

Ride height is pumped up 30mm over the standard model, and lockable four-wheel drive, a low box and hill descent control are rare things indeed on an SUV.

Small and ugly, but tough and loveable. There are few cars on the market that offer this level of fun, but if you want four-wheel drive then prepare to pay the premium.

There is also the question of whether buyers actually want a car with the extra cost, weight and complexity that comes with a proper 4×4 system, but that’s Jeep’s problem, not ours.