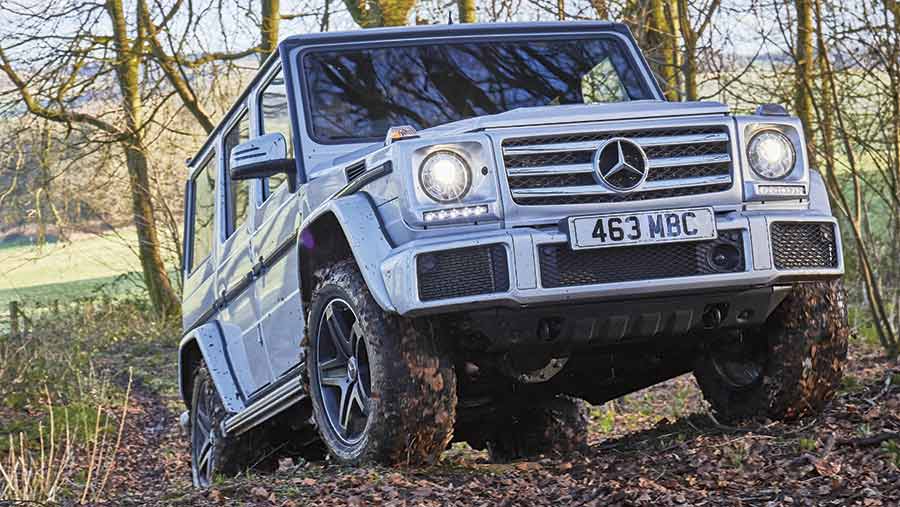 The G-Class is one of Mercedes’ great success stories – an old warhorse kitted out with a few mod cons that now fetches huge fees from the rich and famous.

Built for the German army and launched commercially in 1979, it is now the company’s longest-serving model and has hardly changed over that time, surviving culls that have claimed many off-roading legends, including Land Rover’s Defender.

The lure of its boxy build and retro style – so starkly juxtaposed against the curvy corners of rivals like Audi’s Q7 – has proven enough to convince interested parties to part with at least £100,000 for its services.

Demand still far outstrips Merc’s capacity to hand-build them at its Austrian factory, where production is constrained to just 15 a day.

Various special models have come and gone over the years. Some had winches, others carried huge fuel tanks and there was even a mechanical pto option on the 1981-built 280 GE and 300 GD.

Regular refreshes have gradually pumped up horsepower ratings and taken the interior from war-grade to sheikh-spec.

However, the archaism of its slab-sided exterior is tempered only by a set of 18in alloys on the most basic models.

With that in mind, it’s quite remarkable that the G remains one of the bastions of luxury motoring – particularly in the Middle East.

Many roll out of the factory with Merc’s £3k sports styling package, which blings up the wheels, exhaust and grille – a hint, if it were needed, that these no longer spend life dodging heavy artillery. 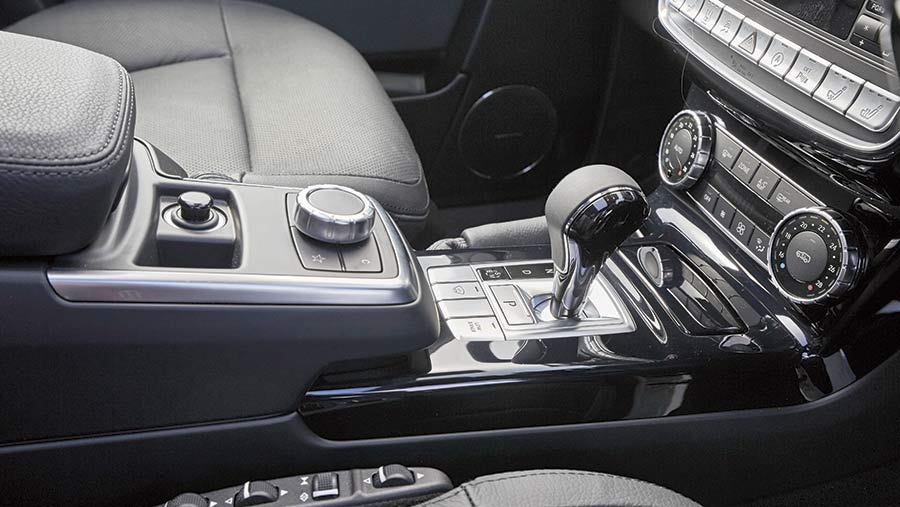 Interior quality is pretty good, although not necessarily befitting of the price-tag. Insulation isn’t enough to dull tyre rumble and wind noise to good levels and space is moderate.

It’s far better than the Defender, but much narrower than most of its big-ticket rivals. Rear passengers are short-changed for legroom, but not for headroom, and the narrow pillars offer good views outwards. 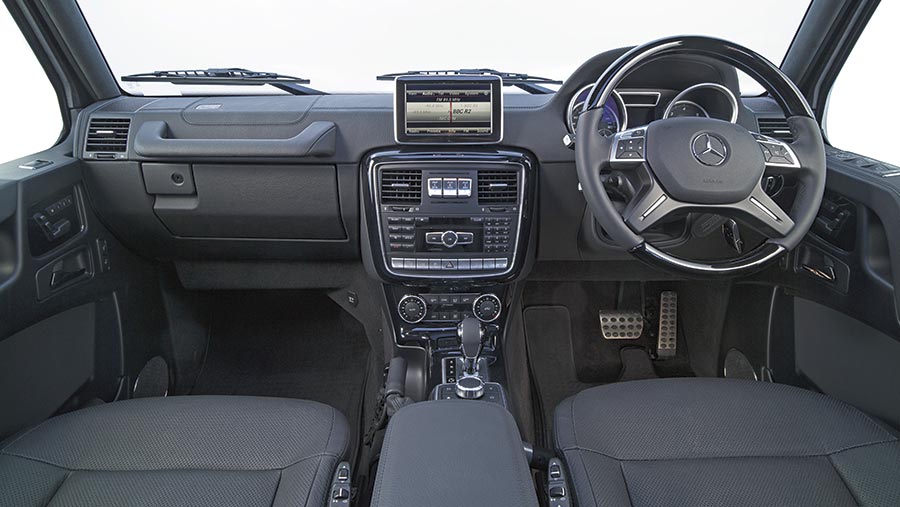 The spec list includes bi-xenon headlights, heated and ventilated seats, a fancy sound system, 8in colour display with a reversing camera and adaptive cruise, although this stuff can also be found on vehicles at half the price.

The 2,987cc V6 turbocharged diesel engine now boots out 245hp (up from 211hp) and 600Nm through a seven-speed auto box and offers permanent power to all four wheels.

Shifts are a little sluggish and the engine is gravelly and agricultural in tone, but its performance remains surprisingly agreeable (if you ignore fuel consumption at a quoted 28.5mpg – and usually much less).

It’s torquey and strong, particularly from around 1,500rpm where it dishes out the power smoothly to maintain traction on sludgy mud.

However, this is a car built to be driven slowly. In a straight line things feel fairly safe, but the old-school design simply can’t handle the pace through corners.

It rolls like a sail ship – despite using stiffer suspension than before – and the electro-hydraulic steering is so heavy and clumsy that it takes a good turn of the wheel before the wheels actually respond.

With that in mind, the 119mph top speed and 8.9sec 0-62mph split are more than ample. One can only imagine what it feels like to get the 422hp G 500 up to its 130mph top speed, but it’s probably worth carrying a spare pair of trousers.

But here’s the thing; none of that stuff is particularly relevant off road, where the G is in a class of its own.

It can wade through water 600mm deep and has approach and departure angles steep enough to embarrass a Discovery or Toyota Land Cruiser. 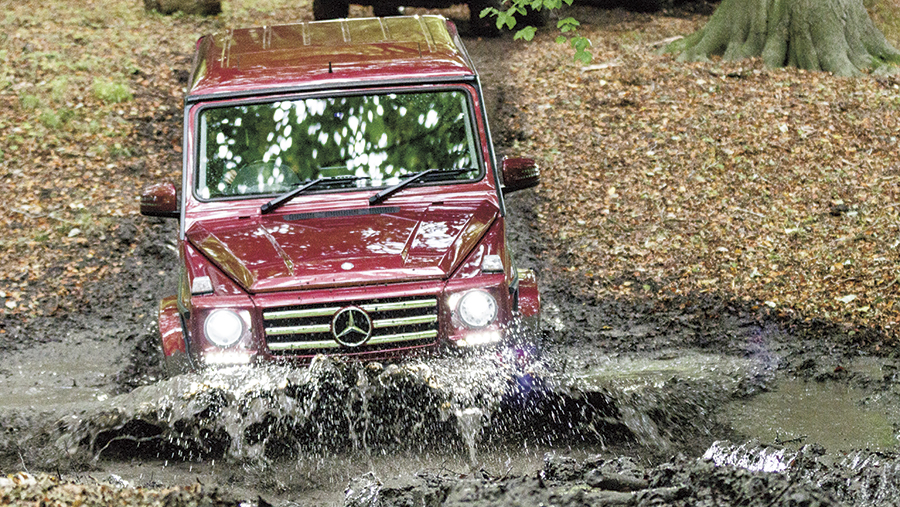 A typically rudimentary ladder chassis forms the base and, although it sits on coil springs, it still bounces around like an old war-beaten pickup truck with an uncomfortably high centre of gravity.

The remedy comes by way of absurdly good axle articulation and ground clearance, which is usually enough to keep it standing upright.

Central to its off-road majesty is the three separate locking differentials – central, front and rear. Add to that permanent all-wheel drive and a low-range transfer gearbox and the Merc has pretty much every tool for negotiating the filthiest routes.

Reliable, tough and a charm like no other, but there’s no credible reason to part with £100k to buy it.

That said, those military roots and the simple, bomb-proof build mean second-hand models are well worth a look.

Mercedes says it will be 53mm longer and 121mm wider, with more leg room, shoulder room and elbow room in the front and the back.

It also gets LED headlamps, a nicer leather interior, a fancy widescreen in the dash and, most importantly, a new independent double-wishbone suspension at the front.

Maximum fording depth has also been increased to 700mm and there will be a nine-speed automatic gearbox.