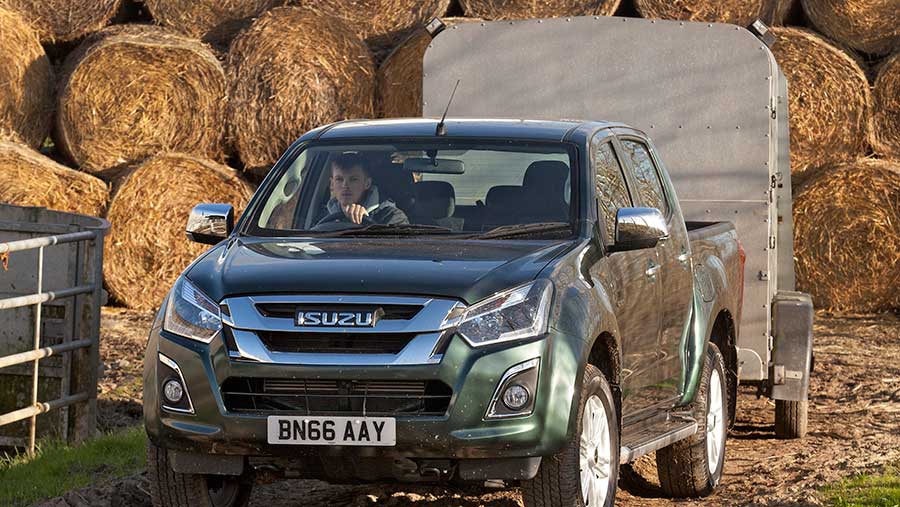 A one-tonne-plus payload and 3.5t towing capacity makes the new Isuzu D-Max ready-made for working life, but propelled by a 1.9-litre diesel? Surely not. Does the latest model still have the firepower to compete?

There seems to be a growing love affair between Isuzu and British farmers.

While most pickup makers are slowly shunning their no-frills workhorses in favour of the gizmo-loving mass market, farming’s favourite Japanese pickup maker has stayed loyal to its working-class roots.

The decision to sell its trucks through agricultural dealerships has undoubtedly proved a shrewd move, with more than two-thirds of all UK-bound D-Max vehicles now finding a farming home.

Of course, convenience is one thing, but cheap prices are the biggest sweetener of all. Rates start just shy of £15,000 for a utilitarian two-seater – loose change when compared with a top spec Amarok at double that – though it’s pipped to the bargain hunters’ post by the Great Wall Steed.

This latest incarnation of the D-Max is due to go on sale later in April and there’s no denying the front-page news – a downgrade (in capacity, at least) of engine from the old 2.5-litre block to a hatchback-sized 1.9-litre burner. 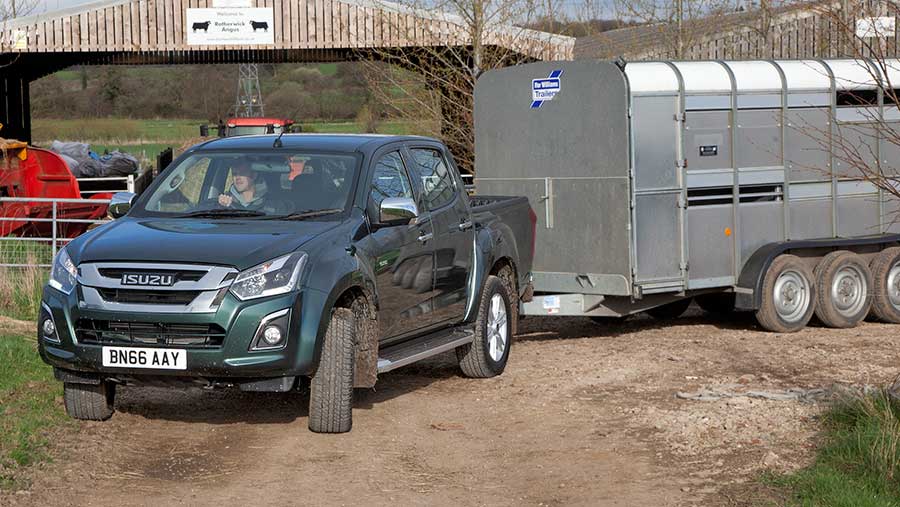 The rest of the changes are minor. Five ranges stay largely the same, albeit with a few tweaks in standard equipment that have seen prices gently inflate by £250 in the case of the base-spec Utility and balloon by up over £1,500 in the plushest Blade models.

We tried out the mid-spec, £20,000 Yukon version, which comes with perks including 18in alloys, silver side steps, 7in touchscreen, cruise control and a decent rear load liner.

Let’s deal first with the diesel downsize – a trend that is sweeping the automotive and agricultural sectors alike with the aim of eking out extra economy and slashing smutty emissions.

There’s only one engine available across the entire range and the headline figures – capacity down 601cc to 1.9-litres and torque 40Nm lower at 360Nm – make alarming reading.

Horsepower is actually one pony up on the old 2.5-litre block, but that’s scant consolation for anyone who buys purely on the basis of spec book figures.

Surprisingly, it’s not quite the wet weekend you might expect. We found it dragged a tri-axle Ifor pretty well and demonstrated particular grit through the middle of the rev range.

As ever, the throttle pedal wants pinning to the carpet for maximum enjoyment, but even then it sounds sharp and crisp. Whether that smaller block will still be as chirpy 10 years down the line remains to be seen. 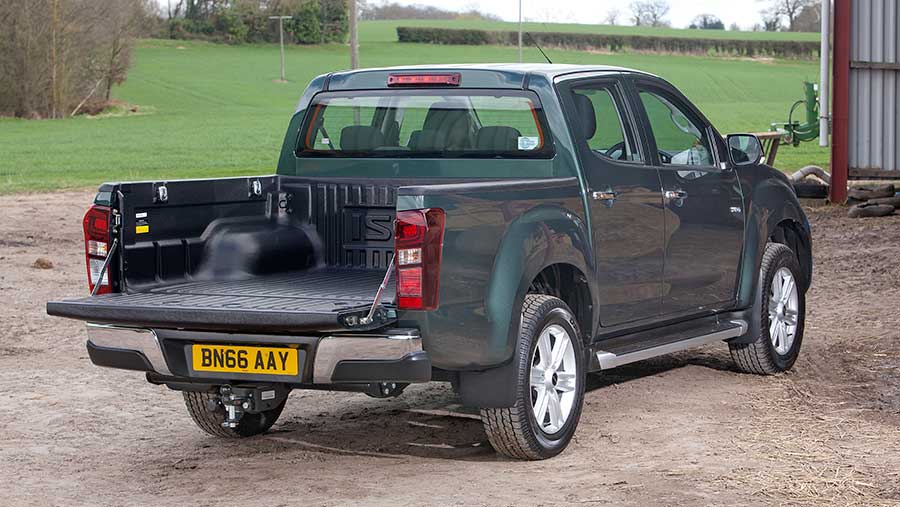 The other upshot of the smaller bores is fuel thirst, which Isuzu reckons is 19% lower than its gravelly-sounding predecessor. We can’t vouch for those figures, but it sipped diesel with undoubted discipline over our couple-of-hundred-mile test.

Interestingly, Volkswagen has decided to head in the opposite direction with its latest Amarok. The new six-cylinder, three-litre block kicks out 550Nm torque in the highest-powered models and, whichever way you look at it, leaves the D-Max looking like a real sissy.

Isuzu actually sells the D-Max with a three-litre block in Australia, and it would surely have plenty of suitors over here, too.

Six-speeders are available in both automatic and manual guise.

We had the latter, which still has the sort of narrow, rubbery-feeling gate that is the natural fit for a pickup, though it’s not quite as sweet-shifting as the Amarok.

The first cog is geared particularly slowly, which is useful for hard towing jobs but leaves everyday drivers in limbo. Pulling away in second works some of the time, but the engine is just a smidgen short of torque to guarantee a stall-free take-off.

Old-school leaf springs at the rear inevitably mean drivers must endure a somewhat jittery ride, though it can be calmed down by throwing a few logs in the back. 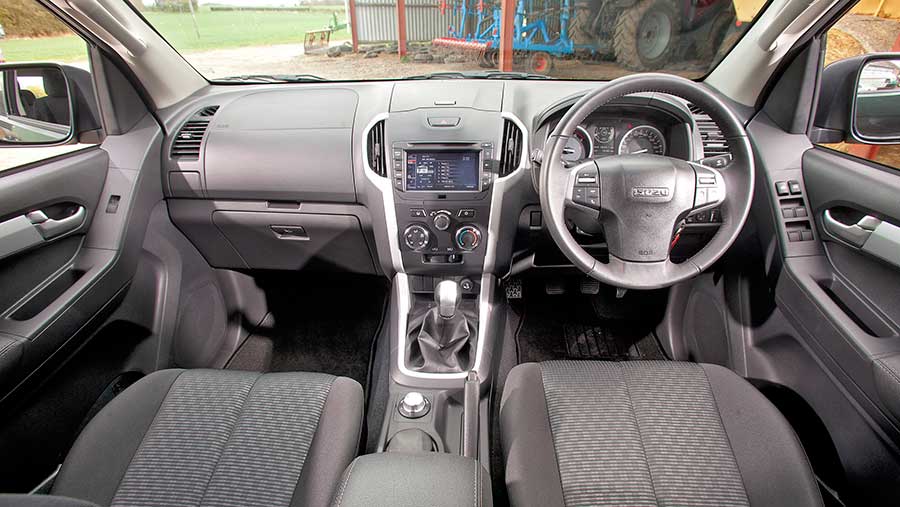 While the likes of Mercedes and VW fit all but the kitchen sink to their pickup interiors to win the spec sheet battle, Isuzu’s Yukon remains very much a working tool.

Of course, electric windows and air-con are the norm these days, but the cloth seats and rubber floor mats seem a bit humdrum.

Big doors come with swish silver sills to offer operators a leg up into the cabin.

There’s an almost unrivalled quantity of clutter-free space with deep, wide footwells and enough room in the rear to be comfortable on long-ish journeys, though buyers might get a little sniffy at the lack of heated pews in exchange for their 20 grand.

Stash spots for used tissues, apples cores, pliers and other farming paraphernalia are well thought out and include a two-part glove box, a lidded tray on the dash and cupholders below the vents near either door.

The plain cab’s one slice of luxury is a 7in screen (on Yukon models, at least). It doubles-up as a hands-free kit for mobile phones but, ironically, isn’t entirely intuitive and would be better replaced by a standard radio arrangement.

There are also ceiling mounted speakers that offer a kind of surround sound and, more importantly, stay clear of muck and dirt. 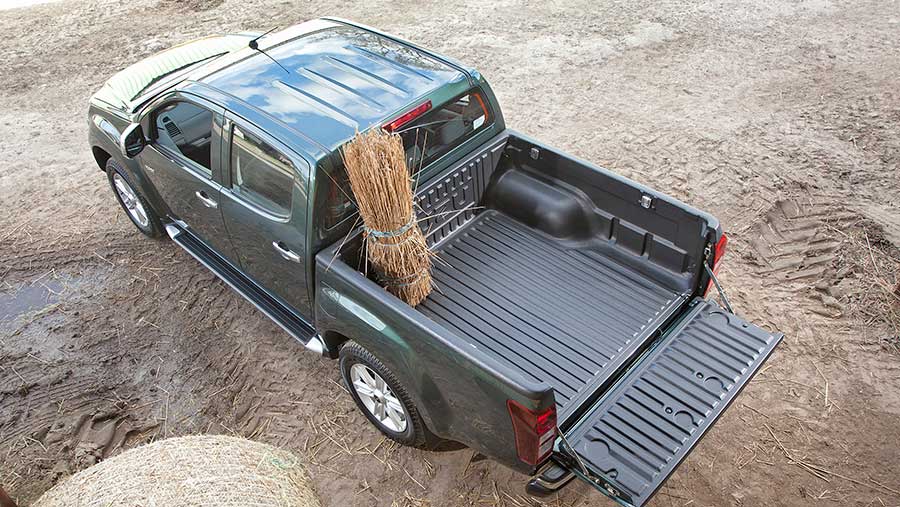 The business end is at the back where a brash chrome handle opens the tailgate to reveal a load bed big enough to swallow whole bales, feed bags and dogs.

The sides are also suitably low to hoick heavy loads on-board and there are internal metal tie-down latches, too. They’d be better placed on the outside for roping down loads with truckers’ knots, but are certainly better than nothing at all.

There’s also a hidden reversing camera stashed in the tailgate handle, which keeps it clear of muck and means there’s no excuses for failing to back up to the Ifor first time.

Most importantly for farmers, the rear deck payload is well over a tonne and the 3.5t towing puts it joint top of the league.

Engine aside, the new D-Max is little more than a minor shake-up, so existing owners shouldn’t feel compelled to upgrade unless their diesel bill is critical.

It remains a simple, solid working tool with easy-to-clean (should you ever feel inclined), hard-wearing plastics and stacks of space. The petit but punchy oil-burner also performed well over the short time we spent with it and shouldn’t be discredited simply because of its size.

Order books are set to open in the back end of April, with Isuzu still throwing the carrot of a five-year, 125,000-mile warranty into any deal.