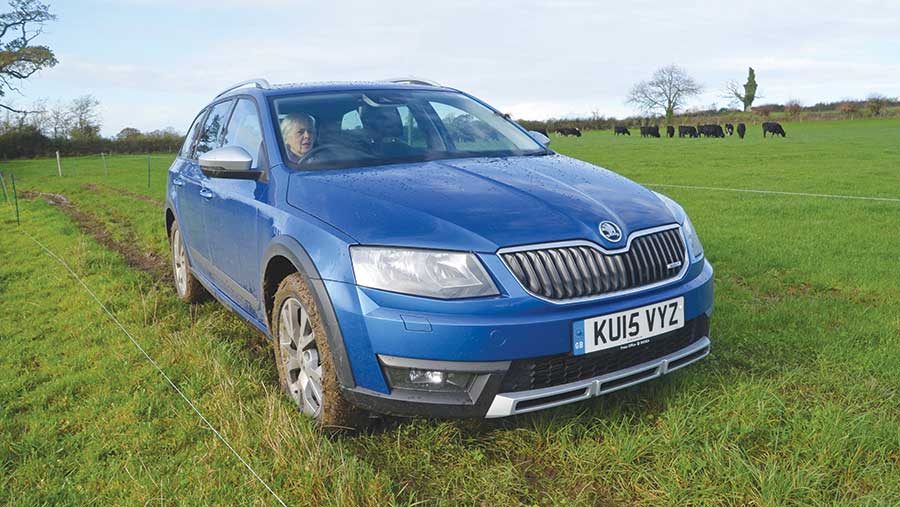 Skoda may just have come up with the ultimate vet’s vehicle. Our latest Country Car is a jacked-up, four-wheel drive version of the Octavia estate – a car that dominates the car parks of virtually every large animal practice in the country. Praise indeed, but would it serve equally well on the rural school run?

To find out, we gave it a long-range road test – a 1,600-mile trek to Hannover and back – and a run-out on some greasy grassland.

Get in and immediately you’re met with familiar VW Group trim and controls, which are typically easy to fathom but a little unremarkable.

Skoda cars seem to improve almost annually and this one is no different. It feels better screwed-together than previous models and plenty of smooth plastics should mean errant lumps of afterbirth and faeces are no issue. The suede seats might not fare so well with other veterinary-related spillages.

On the road it drives just like any other estate car and seems to avoid the extra sway that might be expected from its 33mm taller suspension struts. It also keeps a lid on noise, despite rolling on deep-tread winter tyres.

The standard 150hp 2-litre TDi motor and 6-speed manual box burble along just fine together but feel sluggish at the low-end of the rev range – possibly as a result of the extra drag from the 4wd driveline. For an extra £2,800 you can bag the 184hp version, which comes with an auto box.

Once up to speed it’s an ideal autobahn cruiser, happily coasting along at 90mph and delivering an average of 49.5mpg over a week of mixed driving. Not many 4x4s will get anywhere close to that.

One slightly unnerving feature is Skoda’s lane-assist system, which senses when you are beginning to drift out of your lane and makes gentle corrections to the steering to keep you on track. It won’t wrench the wheel out of your hands, but when you deliberately change lanes it will initially resist until you show it who’s boss.

Back home on the farm after some particularly heavy downpours of November rain, we took the Octavia Scout out to meet the youngstock. In all honesty the cattle weren’t that bothered by the car, but the plucky Czech proved that it has what it takes in the field. It was slippery on top and at times it began to bog down, but the wheels kept turning and that extra bit of clearance stopped it bottoming out.

The widened plastic arches help in limiting the fling of mud but whether the chromed plastic underbody trim will stand the test of time at the hands of late-for-their-next-call veterinarians is doubtful.

We shouldn’t limit the Scout’s appeal solely to those in the business of animal care. Anyone who spends time trundling up and down rough tracks and occasionally finds themselves in the soft stuff is going to find it a useful tool.

It probably comes close to being the ultimate vet’s vehicle but it will make an ideal family farm car too, if you can stomach the £3,600 premium you will pay for the pleasure of all-wheel drive and jacked-up suspension. At £25,405 it’s no Czech cheapie but it isn’t wide of the mark when you compare it with what else is on offer.