The humble Ifor Williams trailer is a mainstay of livestock farms up and down the country, but its tough-as-nails galvanised body can often fool owners into thinking that everything is hunky-dory underneath.

The reality is that if you plan to take a machine on the road then all of the components have to be in good working order, including the lights, mudguards and brakes.

If you are caught with a faulty trailer then it will probably be dealt with by way of a prohibition, fixed penalty notice, or both.

The end-result is that poor maintenance will probably end up costing you points and cash, but the repercussions could be a lot more serious if the trailer is involved in an accident.

An annual service is the best way to keep sheep and cattle boxes in decent nick – and if you are running an Ifor that’s under 10 years old then it could be as little as £135.

Older models cost a few quid more, simply because the wheel bearings take a little longer to pull off, but even a trailer in really poor condition will struggle to rack up a service bill of more than £400.

If you prefer to keep maintenance in house, then a few simple checks could keep your kit on the right side of the law. We have picked out 10 potential trouble spots:

The secondary brake cable coupling needs to be in place and connected.

Just as importantly, it must be looped through an eyelet on the chassis rather than wrapped around the ball, because if the hitch bolts shear then the whole lot will come free.

It costs peanuts, so it’s probably worth keeping a spare in the pickup just in case it snaps while unhitching.

The four bolts that hold the hitch assembly in place must be pinched tight.

If you can feel a bit of slop between the assembly and the A-frame when you come to lift the hitch head on to the tow ball, then it needs tightening up.

Equally, the head should be able to twist smoothly to take account of undulations on the road. 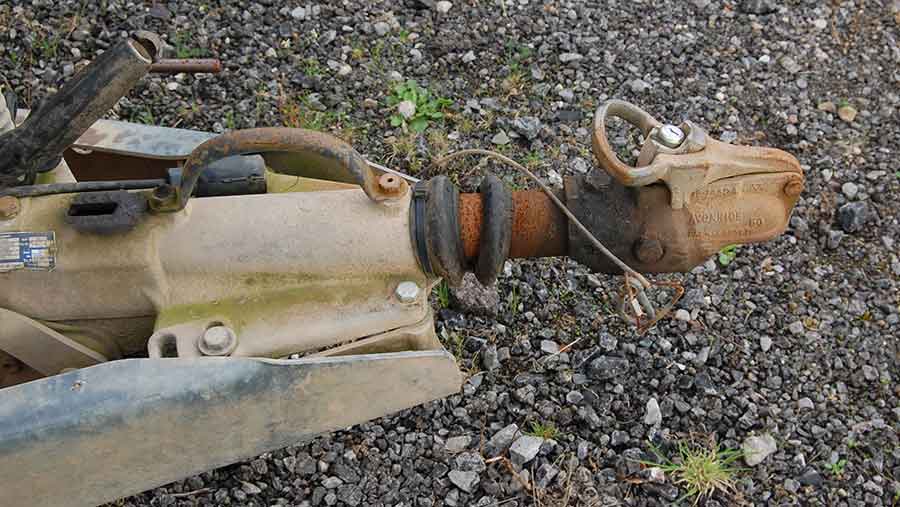 One of the most important components of the trailer is the gas ram fitted in the hitch head.

It is designed to make sure there’s a smooth take-up of the trailer brakes as the towing vehicle slows down and cushions any sharp movements, too.

If the damping ram has failed then you will soon hear the sledgehammer-like sound of the trailer bashing on its stops every time you tickle the brakes.

It’s usually caused by a lack of brake adjustment, but the harsh jolting will eventually rip the tow bar off and puts extra strain on the pickup’s brakes, too.

To reduce the likelihood of this happening, make sure the two grease nipples on the top of the assembly are treated to a bit of lubrication a couple of times a year – if it can’t move freely in and out then the trailer brakes won’t work properly.

If it’s partially seized, then the brakes will be slow to engage and release.

A good check is to apply the trailer handbrake and reverse the towing vehicle backwards a few inches – the strut is designed to cope with 3.5t and should have the power to return the vehicle to its starting position once the clutch has been dipped.

The handbrake is another quick-check item.

A spring is used to keep the brakes locked-on once it is applied, so if you pull the arm upwards and it flops back down then the spring will need replacing.

Once engaged, the arm should sit at a 45deg angle – if it points to the sky then it either needs adjusting or the brakes need changing.

As a test, the handbrake should be strong enough to stall the towing vehicle if it tries to pull away with no throttle. 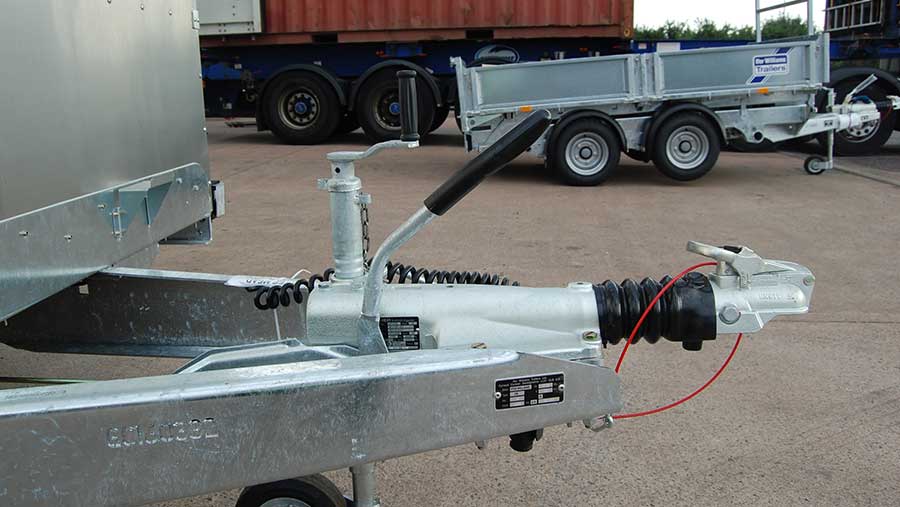 If two or three parts of the hitch assembly are worn out then it might make more sense to replace the whole lot. 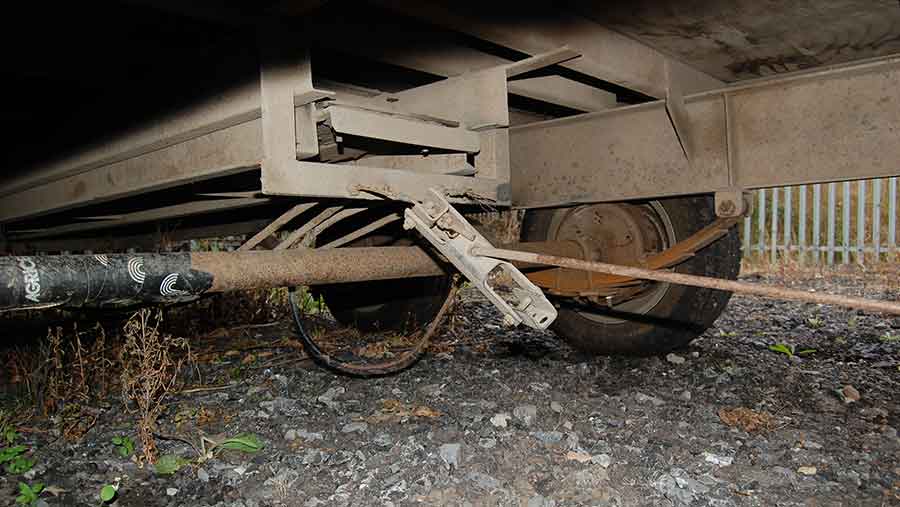 A rod within the hitch assembly controls the brake cable, which runs from the front A-frame to a balance bar mounted on the chassis.

From there, separate sprung stainless steel cables are directed to each of the wheel hubs where they operate the brake shoes.

The balance bar and rockers should sit square to the cables – if they are not then there’s a good chance that the brakes won’t be engaging evenly.

While you’re under there, it’s also worth checking the condition of the cables.

Although they are hidden inside metal sleeves with a plastic coating, they can rub on the chassis and suffer from water ingress, which will eventually cause them to rust and seize.

Cost of a replacement: £16 per brake cable; Penalty: £100 plus three points 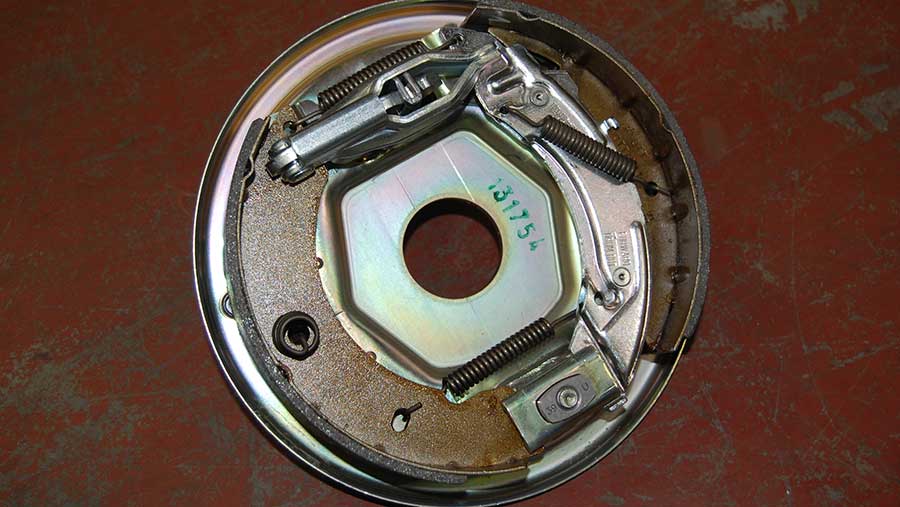 The brakes don’t adjust themselves automatically, so it’s up to the owner to tweak them every now and again. Most twin-axle stock trailers come with 10in brake shoes, but on tri-axle models they are usually eight-inchers.

As you would expect, the smaller shoes get chewed up a lot quicker, so they will need to be replaced every three-or-so years if used regularly. In comparison, the brake lining on twin-axle models is more likely to rot off than wear out. 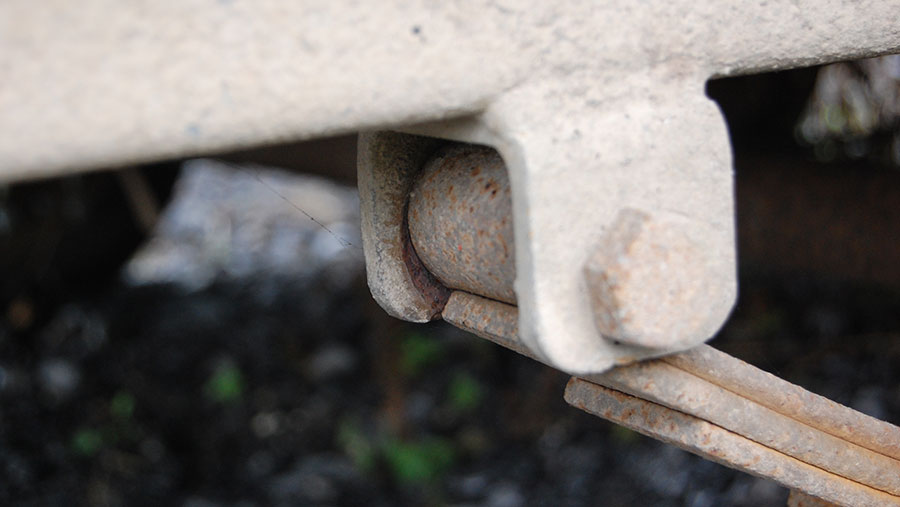 The bolt and bush that connects the leaf spring to the chassis is the main anchor point and needs to be in good order.

The bolt should run through the centre of the bush – if it doesn’t then the bush is shot and the sloppy fit will eventually cause the bolt to shear.

Look out for marks on the chassis that will indicate whether the bolt has been moving about.

Working lights are imperative, along with a number plate and reflectors that should be fitted no further than 40cm from the outermost point of the trailer.

Most replacement rear lights on Ifor Williams trailers will come with rubber mounts and fly leads as standard, but for a similar price you can get LED versions.

They are less susceptible to failure caused by road vibrations and provide a sharper light.

They come as a sealed unit, which should improve their life expectancy but also means that the whole lot will need replacing should the lens get cracked.

Generally speaking, 80% of lighting issues are caused by corrosion at the plug, so check there first.

Tyres must have at least 1mm tread and shouldn’t have any bulges or cuts. The small 12in rims found on DP trailers run at a high pressure of 95psi, so weak spots are quickly found out.

Comparatively, the taller 16-inchers found on the TA boxes run at 68psi.

If you find that only half of the tyre has worn then there’s a good chance that the axle is bent and will need replacing.